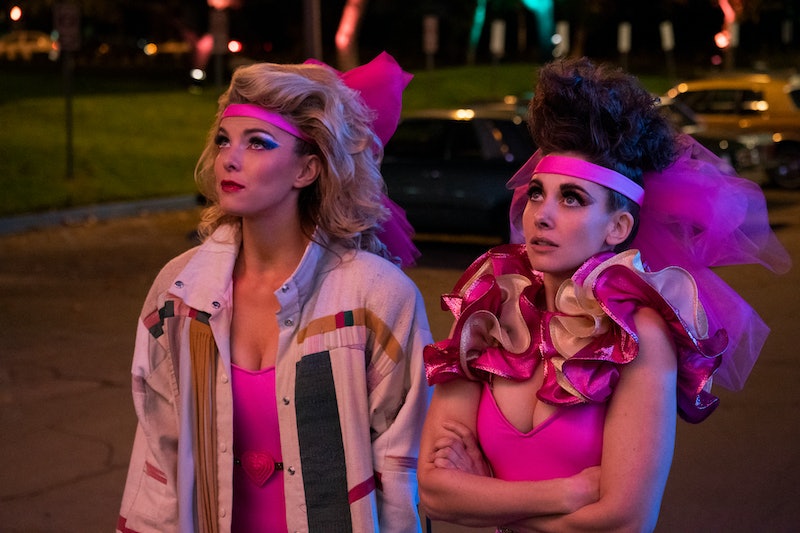 Update: Netflix has retroactively canceled GLOW after initially renewing it for a fourth and final season. "We've made the difficult decision not to do a fourth season of GLOW due to COVID, which makes shooting this physically intimate show with its large ensemble cast especially challenging," said a Netflix spokesperson, per The Hollywood Reporter. "We are so grateful to creators Liz Flahive and Carly Mensch, Jenji Kohan and all the writers, cast and crew for sharing this story about the incredible women of GLOW with us and the world."

Earlier: GLOW may be considered a comedy, but it also has a ton of heart. Now three seasons in, fans have come to truly care about its characters and their journeys thus far. And hopefully, that will be able to continue in GLOW Season 4. Netflix has yet to announce an official renewal, but if all goes according to plan, the show won't get knocked out of the streaming ring any time soon.

Though there's been no renewal (or cancellation) news so far, fans shouldn't get concerned about the show's fate just yet. When Season 2 debuted on June 29 last year, it wasn't until late August that it got the green light for more episodes, so it's possible that the same timeline will apply this year. And if series creators Liz Flahive and Carly Mensch have anything to say about it, GLOW will keep going not just until Season 4, but for a long time to come.

"I hope we have the number of seasons we dream of having because I think that we can then equally explore all of the women," Flahive said of their long-term plan during an interview with The Hollywood Reporter last year, though she didn't specify how many seasons that would entail.

"With Season 1, we had the structure of what we needed to accomplish. And I think that is the great freedom of Season 2 and of future seasons; that we can move around more now that you know and love the characters and understand the story of the show and wrestling. We have these 15 amazing women and ideally by the end of the show, you will know them all in a deeper way."

And when it comes to ideas about the obstacles these women could face next, Mensch assures viewers that they've got plenty to work with. "We have hundreds of ideas of what we want to happen, both in Vegas and beyond," Mensch continued to THR, while Flahive said, "We have some character arcs and ideas. It's enough to hold on to and enough to drive forward, and yet there's a lot of stuff that feels incredibly open as we build."

That's certainly true of Season 3, considering Alison Brie, who stars as Ruth, told PopSugar this batch of episodes is a "total departure" from what they've done before. "All of our characters are trying on different versions of themselves, and they are embracing the themes of Las Vegas — you know, Sin City and what happens in Vegas, stays in Vegas," she explained. "It feels a bit like there are no rules."

If the rules have already been thrown out the window, who knows where a fourth season could go? The show's creative team clearly has a desire to keep the momentum going. Now, all we have to do is wait. In the meantime, enjoy all that the third season has to offer and hope that this won't be the show's swan song. Either way, you can all but guarantee that GLOW, much like the gorgeous ladies it features, won't go down without a fight.

More like this
'Love Is Blind: After The Altar' Season 3 Has A Release Date & It's Very Soon
By Grace Wehniainen
'The Queen’s Gambit' Season 2 Tweet Wasn’t From Anya Taylor-Joy
By Mary Kate McGrath, Jack Irvin and Grace Wehniainen
Ashton Kutcher Wants Danny Masterson “To Be Found Innocent” In Rape Retrial
By Jake Viswanath
Netflix Shut Down 'Bridgerton' S3 Rumours About A “Very Dark” Storyline
By Bustle
Get Even More From Bustle — Sign Up For The Newsletter
From hair trends to relationship advice, our daily newsletter has everything you need to sound like a person who’s on TikTok, even if you aren’t.