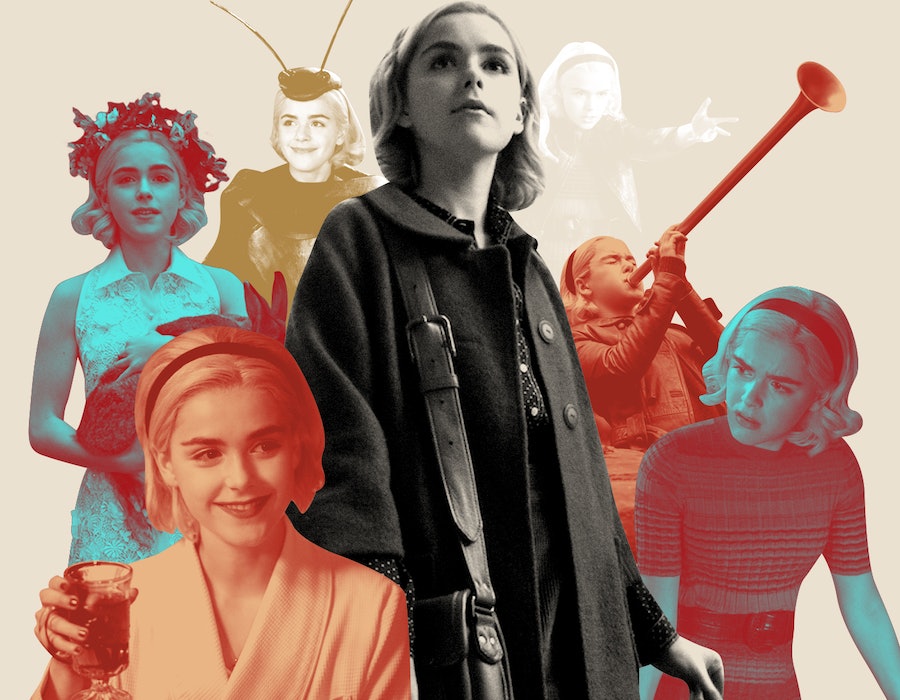 Sabrina Spellman’s reign of terror has finally ceased. Chilling Adventures of Sabrina concluded with its wildly uneven fourth season, and while there are things I’ll miss about the campy occult drama (the fashion being the first, Miranda Otto’s diction being second) there is absolutely no part of me that will long for Sabrina Spellman, or her time paradox double Sabrina Morningstar. From the series premiere through the series finale, Sabrina consistently proved herself to be an egocentric, entitled white savior who never learned to take accountability for her staggeringly long list of missteps. And while there have been plenty of shows where the lead character was also the most frustrating, CAOS’s biggest error was in positioning Sabrina’s privilege as what also made her a hero.

In CAOS, the patriarchy was literally the devil, but the series never displayed any real interest in engaging with feminism through an intersectional lens. (Just look at the ways in which the show failed Prudence Night for proof.) So it’s not surprising that the “woke witch” at the center of the series wasn’t the inspirational advocate Sabrina fancied herself to be, but rather a champion for white feminism specifically. Though Sabrina boasted of her identity as a social justice activist and an ally to the disenfranchised, she — a straight, cisgender white woman born to high social status and power — consistently centered herself in every cause, regardless of whether the issue at hand involved her or was one she was even somewhat educated on. (See: Sabrina running for top boy on her first day at the Academy despite knowing almost nothing about the witch world, Sabrina becoming queen of hell despite the scant amount of time she spent in the infernal realm, Sabrina running for co-president of Baxter High despite rarely attending the mortal school.)

Sabrina’s repeated quests for positions of power she wasn’t qualified to hold were symptomatic of the show’s inability to reckon with its heroine’s privilege in any meaningful way. Whether trying to cheat death by resurrecting Tommy Kinkle or trying to cheat the universe by allowing her doppelgänger to rule as queen of hell, Sabrina always flouted the rules others were bound by — not out of a selfless desire to do the right thing, but simply to prove that she could. And when she knew her friends and family wouldn’t support her, she’d go to great lengths to hide the truth from them, as much out of fear of facing their judgment as out of a disinterest in facing the impact her actions have on others. (There is a bleak irony in how Sabrina, who would go to the ends of the earth — or hell, for that matter — to protect her own agency, rarely gave her friends and family the opportunity to consent when she was faced with a decision that would have a massive impact on their lives.)

The road to hell is paved with good intentions, and had CAOS been a study in how someone with well-meaning motives could do so much harm — and how they could ultimately learn from their mistakes and grow — it could have been a fascinating, resonant series. That’s why I was able to somewhat look past Sabrina’s narcissistic individualism early in the series, patiently waiting for her character to evolve. But when Brina opted to let Sabrina Morningstar live, despite knowing the threat this posed to the entire cosmos, it became undeniably clear the only person Sabrina was ever truly out for was herself.

Despite my better judgment, I still maintained a sliver of hope that CAOS would provide the catharsis I so craved in seeing Sabrina face the cost of her entitlement once the truth of her double was exposed. In Part 4’s fifth episode — spoilers ahead — I thought the moment had come when Sabrina (finally!) admitted she needed to take responsibility for creating a potentially realm-destroying time paradox — but only after the consequences of her secret became impossible to hide from the aunties. Sadly yet not surprisingly, CAOS treated Sabrina merely saying she was ready to take accountability as growth enough. (Though I should have expected nothing less from a show that treated “but I had my fingers crossed” as a legitimate excuse for lying.)

Following a deliciously enjoyable but far too short reprimand by Zelda covering how Sabrina’s self-serving lies were literally destroying the realms, the response to her cosmos-threatening secret quickly shifted to her friends and family searching for any loophole to protect Sabrina from paying a true penance — such as the two Sabrinas merging into one or choosing one Sabrina to die. Compare this to Zelda’s insistence in Season 1 that Tommy Kinkle’s resurrection be undone immediately to restore balance, and it’s clear that the typical rules simply did not apply to the teenaged half-witch.

All we got was the alienating tale of a spoiled young woman who put the entire universe at risk because she refused to choose between being queen of hell and cheerleading.

The moral conundrum of what to do with the twin Sabrinas could have been a catalyst for one or both of them to realize that “having it all” doesn’t mean refusing to compromise or always lying to, gaslighting, and manipulating people to get what you want. (Or that maybe a 16-year-old who has no interest in reaping souls shouldn’t be queen of hell when Lilith is RIGHT THERE.) But ultimately (spoiler alert) all it led to was a martyrdom tale, with Sabrina Spellman and Sabrina Morningstar each sacrificing themselves in the show’s final episode to save the universe.

Though Sabrina’s loved ones wept over her loss, my eyes remained bone dry. The truth is, Sabrina’s deaths would have felt sadder if they didn’t seem so avoidable. Sabrina Morningstar never should have existed to begin with, if we’re being honest, and Sabrina Spellman likely could have survived had she bothered to consult anyone at any step of the process instead of running off half-cocked, sowing confusion and raising the risks. But while a lot of the problems in the final season were the results of mistakes Sabrina made, that doesn’t mean she should have died to pay for these errors. In fact, by killing both Sabrinas, the show let her off the hook completely, allowing her to die a hero rather than live and grapple with her mistakes. Through her death, all of Sabrina’s texture and flaws were flattened and forgotten until she became nothing more than a saint-like figure who martyred herself for the greater good. And this is not a gross exaggeration: After her death, the Academy literally erected a golden statue of Sabrina in a place typically reserved for the coven’s deities, positioning her self-serving exceptionalism as not only worthy of praise but perhaps even of worship. (And do not even get me started on how the show then revealed Nick Scratch had drowned off-screen so that he and Sabrina could be reunited in heaven in a blatant attempt to reward her with a happy ending on the back of a beloved character’s possible suicide.)

Handled thoughtfully, Sabrina’s worst tendencies — her entitlement, her performative altruism, her know-it-all insolence — could have provided CAOS with a nuanced heroine whose self-discovery journey would resonate with many struggling to navigate their burgeoning independence. But instead, what we got was the alienating tale of a spoiled young woman who put the entire universe at risk because she refused to choose between being queen of hell and cheerleading, and whose selfish frivolity was celebrated until the very end. So while I will miss Zelda, Hilda, Ambrose, Prudence, Lilith and, of course, the fashion, I must say good riddance to Sabrina Spellman. May we never meet again.