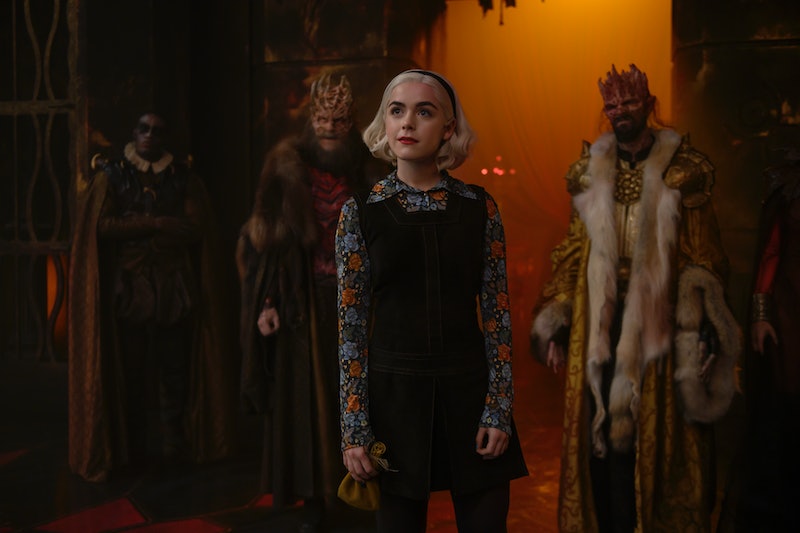 Looks like the Spellman family is closing up their magic books once and for all. Netflix has cancelled The Chilling Adventures of Sabrina in the middle of the show's second season. (Each season of Sabrina was split into two parts; Part 3 premiered in January.) The series will concluded with eight more episodes, which will premiere on the streaming service in late 2020, according to TVLine. "Working on Chilling Adventures of Sabrina has been an incredible honor from Day One,” the show's creator and runner, Roberto Saguirre-Acasa, told the outlet in a statement announcing the news.

"The cast, beginning with Kiernan [Shipka] as everyone’s favorite teen witch, has been an absolute joy," he continued. "I am beyond thankful to the crew, writers, editors, assistants, and everyone for pouring so much love into this dark dream of a show. I’m also grateful to our partners at Netflix, Warner Bros., Berlanti Television and Archie Comics for letting us tell the story we wanted to tell, the way we wanted to tell it." Saguirr-Acasa concluded his statement by noting that he and the rest of the cast and crew "can’t wait for everyone to see Part Four" of Sabrina's story.

When fans last left Greendale and everyone's favorite teenage witch, Sabrina (Kiernan Shipka) had made the treacherous journey into Hell in order to attempt to make amends for the heroic sacrifice her boyfriend, Nick (Gavin Leatherwood), made to defeat Lucifer. Along the way, she was forced to assume the throne as the Queen of the underworld, and to face off against Prince Caliban (Sam Corlett) as the rightful ruler. However, the growing attraction between the couple complicated things — especially considering the fact that Sabrina and her friends were originally determined to rescue her ex from eternal damnation.

Along the way, the coven and the town of Greendale found themselves fighting against a creepy carnival intent on reviving an ancient evil that could mark the end of the Spellman family. Part Four will pick up in the middle of that battle, as "The Eldritch Terrors will descend upon Greendale," according to Netflix. "The coven must fight each terrifying threat one-by-one (The Weird, The Returned, The Darkness to name a few), all leading up to…The Void, which is the End of All Things." The synosis teased, "As the witches wage war, with the help of The Fright Club, Nick begins to slowly earn his way back into Sabrina’s heart, but will it be too late?"

Netflix's decision to cancel Chilling Adventures of Sabrina comes just one week after the CW declined to renew Riverdale's other spinoff series, Katy Keene, after one season. Both cancellations make it much more unlikely that Riverdale fans will get to see the Archieverse crossover that they've been hoping for; however, Aguirre-Sacasa has shared quite a few ideas for a way to bring the towns of Greendale and Riverdale together in recent years. "I think there’d be a great episode where the Riverdale kids hear about a haunted house in Greendale and try to break in and it’s Sabrina’s house. There’s totally a universe where that happens," the creator told Entertainment Weekly in October 2018.

However, Aguirre-Sacasa also offered up another possible crossover at the time that could still happen on day. "Now that we’ve got Sabrina and Riverdale, maybe there’s a standalone Afterlife movie or something that we can do combining both casts," he suggested, referring to the cult favorite comic series that brings both casts together with horror-movie flair. Regardless of whether or not Sabrina manages some kind of revival, fans can enjoy the magic and mystery of Part Four when it premieres on Netflix later this year.