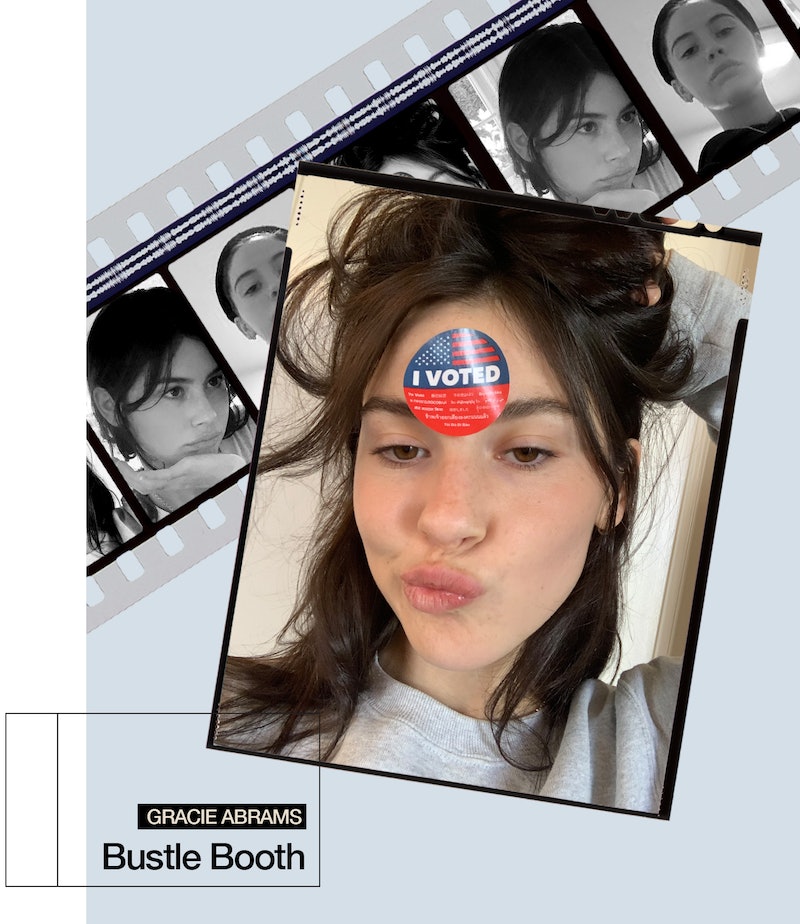 Gracie Abrams had an imaginary friend growing up. Her name? Joni Mitchell. Yes, Abrams spent her childhood pretending that she and the iconic folk singer were best pals. “I remember looking through old pictures of her when she was younger, I [thought] of her as a friend figure,” the now 21-year-old singer-songwriter tells Bustle. “I wanted to know her, and I feel like I did, through her music.” Mitchell’s lyrics felt like they were speaking directly to the young and precocious Abrams, who now hopes to imbue her own work with the same feeling of intimacy.

Abrams’ first EP minor, released in July, was a personal one. With a breathy bedroom pop sound and revealing lyrics, the seven-song track list is a vulnerable look at Abrams' experience with heartbreak. “I wrote it at the end of a very transitional year for me, having gone [to college] and gone through my first real breakup,” says Abrams. While the EP centers on the dissolution of a relationship, Abrams worked on it alongside her current boyfriend, producer Blake Slatkin. Unpacking all of it with Slatkin “was weirdly cathartic and slightly emotionally overwhelming.” They lit incense, they went on walks, and she purged her heartache onto the page.

Abrams, daughter of famed Lost creator J.J. Abrams, found it easy to tap into her emotions; she's been journaling about them since she was 8. She still won't go anywhere without her journal. “I pick it up as much as I pick up my phone, it's just habit at this point," she says. "I wouldn't know what to do with myself without it." When she started playing guitar and piano at in her early teens, she found songwriting to be second nature.

She started small, posting short clips of her singing on Instagram and some acoustic covers on SoundCloud. Then she stumbled across Phoebe Bridgers, whose darkly funny lyrics became a guiding light for Abrams' own songwriting. “I remember feeling very lonely," says Abrams. "Her music spoke to me. I'm so grateful to Phoebe. I think she's so clever. She makes what's hard to talk about actually digestible and acceptable.”

These days Abrams has returned to her roots, playing music out of her bedroom in quarantine. But this time her now-livestreamed shows have an audience, and tickets sell out in minutes. She's also started working on a new album (her new song “Brush Fire” is out now) and her sound has already started to evolve. “I felt like such a narcissist by the time I was done with minor, spending that much time writing about a relationship, just shut up already,” says Abrams with a laugh. “I’m writing about some different subjects and feeling glad I’m capable of stepping out of my stupid bubble.”

Learn more about Abrams — including in her love of David Attenborough — in her Bustle Booth questionnaire below.

"Dancing on My Own" by Robyn.

More like this
Lauren Lyle Is Keeping The Contents Of Karen Pirie’s Bum Bag A Mystery
By El Hunt
'Grey's Anatomy's New Intern Got Advice From Dr. Bailey Herself
By Grace Wehniainen
On 'The Handmaid’s Tale,' Christine Ko Fights Back
By Gretchen Smail
Everything To Know About Taylor Swift’s 10th Studio Album, 'Midnights'
By Grace Wehniainen and Jake Viswanath
Get Even More From Bustle — Sign Up For The Newsletter