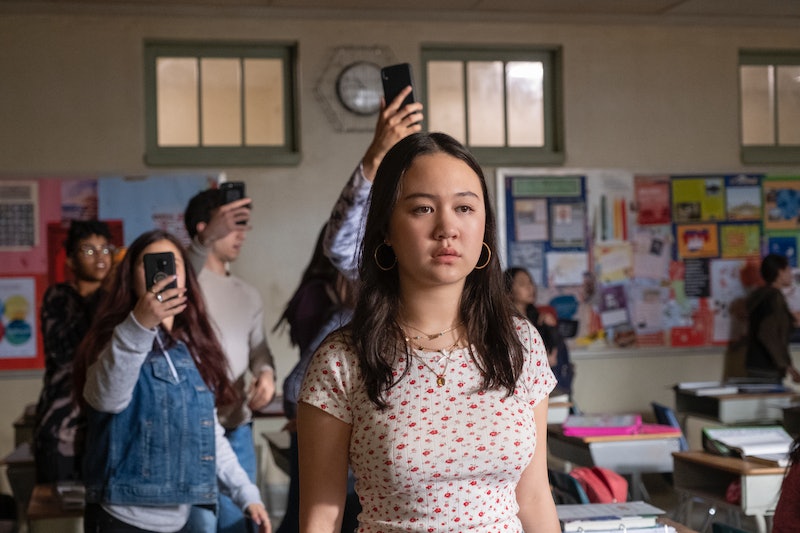 Netflix is introducing a new crop of up-and-coming stars with the cast of Grand Army. The teen drama, premiering Oct. 16, follows five students at Grand Army High School in Brooklyn as they deal with things like dating and worrying about college on top of weightier subjects like racism, intersectionality, and homophobia. Per Deadline, the series is based on a short play by showrunner Katie Cappiello, which focused on a 16-year-old named Joey Del Marco who's sexually assaulted by three of her friends.The Netflix series expands that story to include four other students.

This is all brought to life by a number of young actors, many of whom are native New Yorkers and studied under Cappiello previously. "For me, it was always a goal to have as many young people that I’ve worked with over the course of my years of teaching involved in this project,” Cappiello told the New York Post. “I’ve watched these kids grow up, I’ve watched their acting skills evolve. And the show would not be the show without their involvement.”

It's the cast who helps to make the show feel authentic. “It’s really special to watch kids who have lived this experience then embody it on TV,” Cappiello added. “There’s a deep understanding. These are not biz kids. They get it. We needed that grit, we needed that passion, we needed that thing that New York City kids have in order to make our show feel real.”

Get to know them and their characters below.

Jean's character is a 17-year-old from Brooklyn who's striving to be the first in her family to go to college. The show also marks a first for Jean, who's starring in her first leading role after studying theater with Cappiello. "[In theater] you memorize beginning to end, you go onstage, and you give your all — you make a mistake and just keep pushing, you do what you’ve got to do until the end of the play," Jean explained to Backstage. "But TV was different... seeing how it’s dissected and cut up and shot and filmed was a huge learning experience."

Jayson is a sophomore at Grand Army High School who plays the saxophone and hopes to one day get into Juilliard, per Deadline. According to Instagram, Johnson himself is a dancer and model and, yes, he really did learn to play the saxophone for Grand Army. You also might recognize him from another intense Netflix series: he played Terence in two episodes of When They See Us.

Leila is a freshman at Grand Army, and as an adopted Chinese girl living with Jewish parents in the Upper West Side, she's feeling torn between her identities. Actor Amalia Yoo took on the role after appearing in Cappiello's original play, albeit in a much smaller capacity. Now she gets to step into her own as one of the lead characters.

Sid is an 18-year-old senior from Queens who's dealing with a lot of pressure from his parents, girlfriend, school, and swim teammates. Confronting the specific pains of adolescence are nothing new for actor Amir Bageria, though: he previously appeared in Degrassi: Next Class as Baaz Nahir.

Joey, who was the main character in the original play, is portrayed by Pamela Adlon's daughter Odessa A'zion, who previously appeared in Nashville and CBS' Fam. She told Nylon that she has mixed feelings about the show coming out, because it was a challenging role for her to take on and an intense show to film. "I've never been this vulnerable in front of the camera before."

More like this
The ‘Emily In Paris’ Season 3 Release Date Is Here, Plus The First Footage
By Bustle Staff
The ‘You’ Season 4 First Look Shows Joe’s New Identity And Potential Victims
By Bustle Editors
New ‘Lupin’ Part 3 Teaser Hints That Assane Will “Go Out In Style”
By Brad Witter
Devi Is Going To Meet A “Smoldering Bad Boy” In ‘Never Have I Ever’ Season 4
By Jack Irvin and Gabrielle Bondi
Get Even More From Bustle — Sign Up For The Newsletter