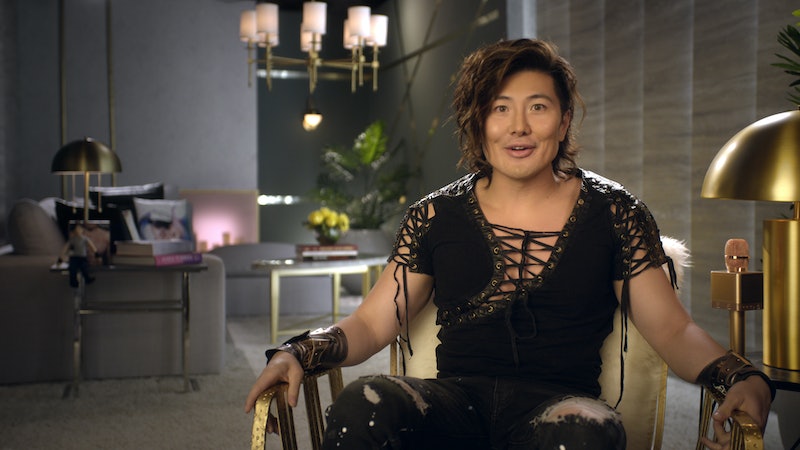 He may not be part of the main cast, but Bling Empire's Guy Tang has somehow proven to be one of the most polarizing figures on the show. While some viewers loved the hairstylist, others couldn't stand him. Whichever camp you fall in, here's what you need to know about Guy.

Based on the photos Guy posts to Instagram, his motto as a hairstylist is the wilder color, the better. He even has his own hair color product line called MyDentity so fans can snag some of his signature bold shades. "I wanted to create a color line that fills the void in our industry," Guy told Concept Hair magazine of why his product line includes so many fun tones.

Currently, it doesn't seem like Guy is taking any new hair clients, as his Salon Republic page is blank and his Yelp! page says he's closed. But he's still very involved in the hair world. In addition to his product line, he runs a popular YouTube page which features tons of hair tutorials for his 2.26 million subscribers. And what he can do with hair dye is honestly pretty amazing. Check out this rainbow wig he recently created.

In addition to working in the hair industry, Guy is breaking into music. He released two albums — #More2Me and Multi-Perspective — in 2020, and he often posts music videos for his songs on his YouTube channel. He released a steamy video for his song "Gimme What I Want" just a few days ago, and it features two Bling Empire stars: Kevin and Kane.

Guy's husband Almar Guevarra is a pretty private person (with a private Instagram and everything), but every once in a while, he'll pop up on Guy's social media pages. Last March, Guy lauded Almar for being a healthcare worker dealing with the pandemic on the frontlines. "My husband is a nurse. Thank you Almar Guevarra for saving lives," Guy wrote alongside a picture of the two of them.

The hairstylist's Insta page features a lot of the same content you can see on YouTube. He posts a lot of his music clips and pictures of his work on people's hair.

He also posts a lot of shots of his very adorable dog.

Guy tweeted that he's game for a second season of Bling Empire if the show gets renewed. So perhaps we'll see him back onscreen soon.