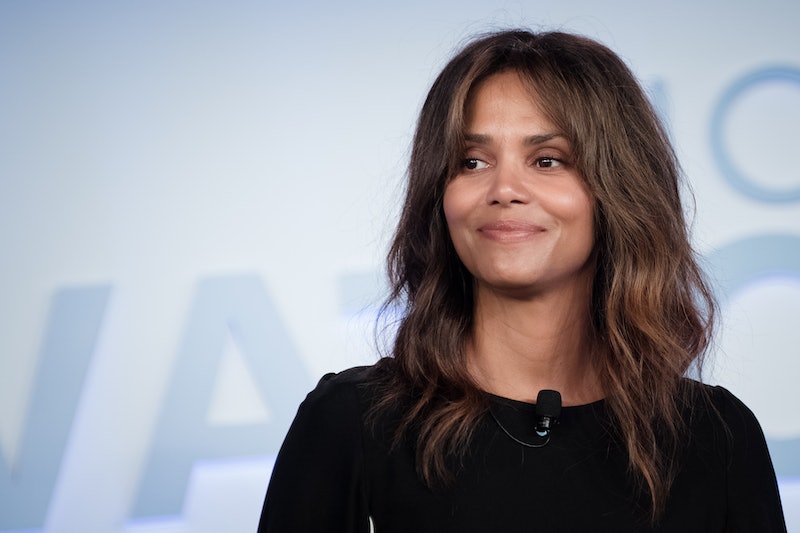 Shortly after the Oscar winner earned backlash from the LGBTQ+ community for revealing that she wanted to play a transgender character, Halle Berry apologized for considering a role as a transgender man. Pledging to be an ally, the Oscar winner stated that she hopes that the role will go to a trans actor. This statement came just a few days after Berry revealed that she was preparing for a new project in which she would play a transgender man during an Instagram Live with hairstylist Christin Brown on Saturday, July 4.

"[It's] a character where the woman is a trans character, so she's a woman that transitioned into a man," Berry said, though she declined to offer any details about the film in question. "She's a character in a project I love that I might be doing." She continued, "This project got pitched to me right when I was on the brink of making Bruised and making my directorial debut and I so was in the mindset of getting in the body to play that… But this got pitched to me, and I thought, after I do this movie, that's the character I'm going to play."

However, after Berry earned a great deal of backlash from the LGBTQ+ community who critiqued her — a cisgender woman — for taking a potential role away from a trans male actor, the Oscar winner released a statement on Twitter, explaining that she had heard their concerns and had decided not to move forward with the project. Furthermore, she wanted to apologize for considering the role in the first place. "Over the weekend, I had the opportunity to discuss my consideration of an upcoming role as a transgender man, and I'd like to apologize for those remarks," Berry wrote in her statement. "As a cisgender woman, I now understand that I should not have considered this role, and that the transgender community should undeniably have the opportunity to tell their own stories."

She continued by thanking the LGBTQ+ community for their "guidance and critical conversation over the past few days," and promised that she will "continue to listen, educate and learn from this mistake." Berry concluded her post by adding, "I vow to be an ally in using my voice to promote better representation on-screen, both in front of and behind the camera."

Several prominent voices in the trans community praised Berry for her willingness to listen and learn, including actor Brian Michael Smith, who shared his hopes that she will use her influence to improve transgender representation in film. "Thank you for hearing us and for taking the time to listen and understand our concerns," the 9-1-1 Lone Star and Queen Sugar star wrote on Twitter. "Furthermore, I appreciate your vow to take action and use your platform to promote better representation and opportunities for marginalized artists on both sides of the lens." Berry's apology also earned support from GLAAD, who wrote on Twitter that they were "pleased that [she] listened to the concerns of transgender people and learned from them," and encouraged other prominent figures in Hollywood to "do the same."

Despite earning support from parts of the LGBTQ+ community for her apology, Berry is still facing criticism for misgendering the film's lead character during the original Instagram Live conversation. "She’s a character in a project I love that I might be doing,” Berry said during in that interview. “It’s really important to me to tell stories, and that’s a woman. That’s a female story. It changes to a man, but I want to understand the why and how of that.”

"It absolutely is NOT a female story, it is a story about a man," transgender activist Serena Dianari wrote in response on Twitter. "And why is the aspect of physical transition the focal point for her? Cis peoples' understanding of trans issues is really myopic." Berry has not yet apologized for her comments misgendering the character in question, though she stated her intention to continue learning about trans issues in her Twitter apology.