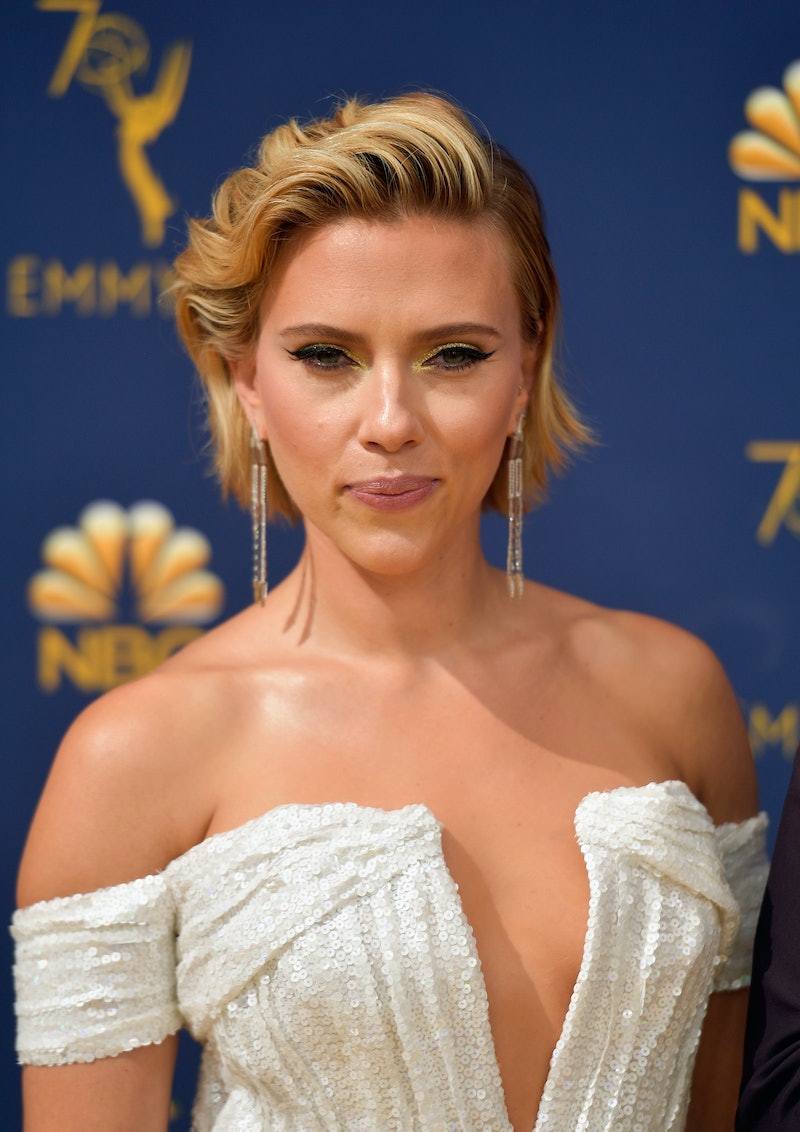 In a new interview with As If, Scarlett Johansson shared how she feels political correctness can negatively affect film casting, and her comments have sparked backlash on Twitter. On Sunday, Scarlett Johansson responded to the backlash in a comment to Bustle in which she claims that her quotes to the publication have been "widely taken out of context."

Johansson's statement begins, "An interview that was recently published has been edited for click bait and is widely taken out of context. The question I was answering in my conversation with the contemporary artist, David Salle, was about the confrontation between political correctness and art. I personally feel that, in an ideal world, any actor should be able to play anybody and Art, in all forms, should be immune to political correctness."

She went on to acknowledge that the industry favors white, cisgender actors. "That is the point I was making, albeit didn't come across that way," her statement continued. "I recognize that in reality, there is a wide spread discrepancy amongst my industry that favors Caucasian, cis gendered actors and that not every actor has been given the same opportunities that I have been privileged to. I continue to support, and always have, diversity in every industry and will continue to fight for projects where everyone is included."

Per The Hollywood Reporter, in her interview with As If, Johansson discussed how she believes political correctness can impact art. "You know, as an actor I should be able to play any person, or any tree, or any animal, because that's my job and the requirements of my job," she said. She also noted. "I feel like [political correctness is] a trend in my business and it needs to happen for various social reasons, yet there are times it does get uncomfortable when it affects the art because I feel art should be free of restrictions."

Her comments quickly sparked backlash on social media. On Saturday, Fran Tirado, the deputy editor of Out tweeted, "Last year ScarJo was the highest paid female actor in Hollywood, making $40.5 million. The fact that she still feels she deserves to take up space and jobs away from trans/PoC actors is a microcosm of how people still don’t really understand how “allyship” works." Twitter user @smickable wrote, "Yes, ScarJo, you should be able to play a tree. Because there aren’t countless sentient trees desiring to act yet struggling to get cast in roles. But there ARE ton of LGBTQIA l/non binary actors who have vocalized that they would love to represent those characters."

NPR's TV critic, Eric Deggans added, "One definition of white privilege is being able to pretend the advantages you have — in this case, an industry full of executives who will let you play any characters you want in a way they don't for actors of color — are just an exercise in fairness."

In 2018, Johansson faced backlash after being cast as Dante "Tex" Gill, who is believed to have identified as a transgender man, in the film Rub & Tug. In July of that year, the actor issued a statement to Bustle about the controversy surrounding a cisgender actor being cast as a trans person, "Tell them that they can be directed to Jeffrey Tambor, Jared Leto, and Felicity Huffman's reps for comment." (The three cisgender actors have played transgender characters in previous projects.)

Ultimately, the Avengers star pulled out of the project. Per THR, she said at the time, "In light of recent ethical questions surrounding my casting as Dante Tex Gill, I have decided to respectfully withdraw my participation in the project." Prior to Rub & Tug, Johansson previously faced controversy in 2016 after being cast in The Ghost in the Shell, a movie based on a Japanese anime. Some fans said that her casting was whitewashing.

While Johansson's entire interview can only be read in As If, her comments that are available are a reminder that Hollywood still has a long way to go when it comes to casting projects inclusively.