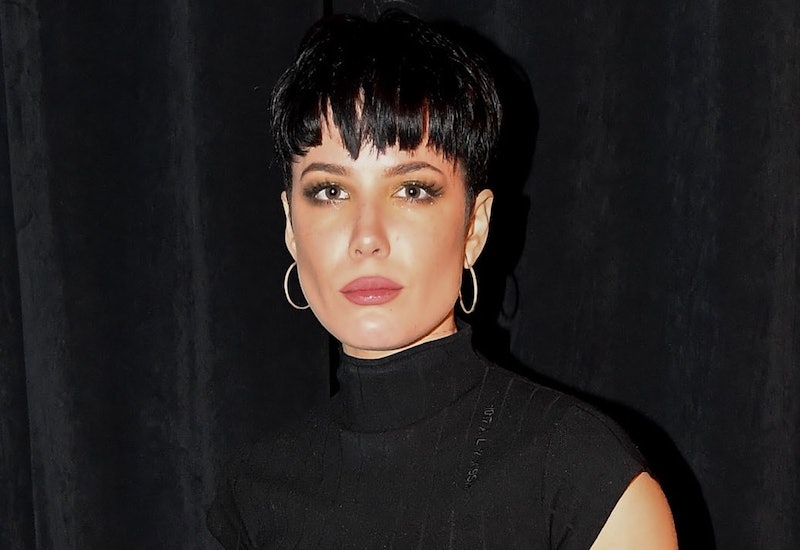 Surprise, indeed. Singer-songwriter Halsey just announced that she is pregnant. The artist shared the baby news alongside a series of photos shot by photographer Sam Dameshek on Instagram on Jan. 27. Her protruding belly is front and center in the snapshots, which take place in front of an ethereal tarp in a pastel gray and purple. Halsey captioned the Instagram post, "surprise!" with a baby, milk bottle, and rainbow emoji.

Halsey has not shared further details about the pregnancy at this time, but she tagged Alev Aydin, a writer and producer, on her baby bump in the photo. Aydin left a comment on the photo that read, "Heart so full, I love you, sweetness," to which Halsey replied, "I love you!!!!! And I love this mini human already!" Bustle has reached out to Halsey's reps for confirmation that the two are expecting, and will update this post when we hear back.

The singer was previously linked to musician Yungblud and actor Evan Peters. The baby news comes after Halsey shut down down pregnancy rumors in November 2019 after she and Peters were photographed touching her belly during a public outing. Halsey took to Twitter shortly after to declare, "Still not pregnant. Still just allergic to gluten. Still love pancakes." She added in a follow-up tweet, "Is it a boy? Is it a girl? It's pancakes."

Halsey — who has detailed her experiences with endometriosis, a reproductive disorder that makes it difficult to get pregnant — has long been vocal about her reproductive health challenges. She opened up about the "demoralizing" miscarriage she experienced in an interview with The Guardian in February 2020. "It's the most inadequate I've ever felt," Halsey said. "Here I am achieving this out-of-control life, and I can't do the one thing I'm biologically put on this earth to do, then I have to go onstage and be this sex symbol of femininity and empowerment? It is demoralizing."

In 2018, Halsey was honored at the Endometriosis Foundation of America's annual Blossom Ball for raising awareness about the disorder. In her speech, she addressed the "privilege" of meeting fans on the road with similar experiences. "A lot of people are taught to believe the pain is normal. If you think something is wrong, it probably is," she said. "You need to go and demand that someone takes you seriously. Your health is all you have, and especially as a young woman who has reproductive pain, you need to take care of yourself."