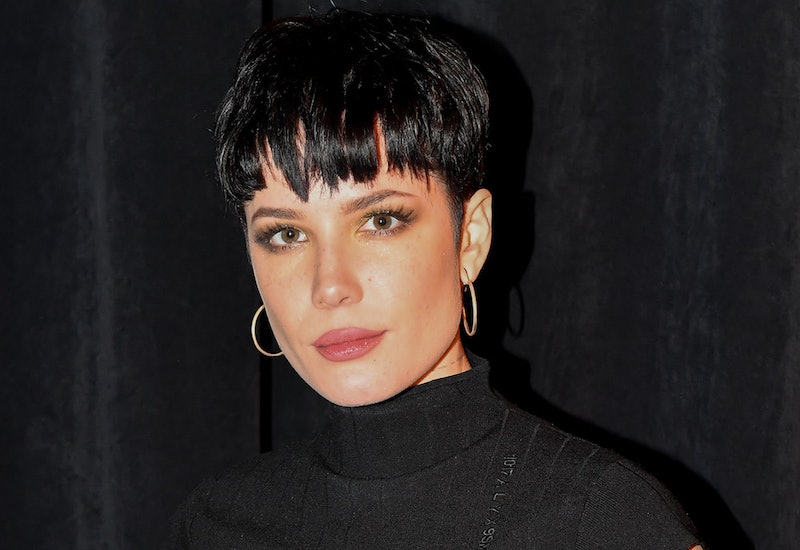 In the midst of growing speculation about Kanye West’s recent erratic public behavior, Halsey called for bipolar disorder and mental health awareness and compassion in a series of tweets. The “Without Me” singer took to Twitter on July 20 and said she was “disturbed” by the jokes and reactions to West’s somewhat shocking tweets. Though West has not commented on his current mental health, many people on Twitter reacted to his statements Monday night by making light of the situation, something that didn't sit well with Halsey.

Citing her own experiences with bipolar disorder — she began publicly talking bout her diagnosis in 2015 — a mental health condition that can cause extreme mood swings, Halsey said that jokes made at the expense of people who experience mental health issues “hurts more than the [one] person [you’re] angry with.”

“No jokes right now,” Halsey wrote. “I have dedicated my career to offering education and insight about bipolar disorder and I’m so disturbed by what I’m seeing. Personal opinions about someone aside, a manic episode isn't a joke.” She added that those who “can’t offer understanding or sympathy” should simply offer their silence. Halsey added that “taking this opportunity to make offensive remarks and vilify people with mental illnesses is really not the way to go.”

“If you wanna think someone is an assh*le, go ahead," she concluded, without mentioning West. "Lots of people with mental illnesses are great. Lots of them are assholes. Because they are people. With nuanced personalities.” The singer signed off on the tweets as a “human being with a decade long bipolar diagnosis.”

West has long been vocal about his mental health. In Ye, the rapper’s 2018 eighth studio album, West weaves his experiences with bipolar disorder into various song lyrics. And, during an appearance on David Letterman’s Netflix series My Next Guest Needs No Introduction in 2019, West provided insights into how the disorder affects him and revealed that he was under a doctor’s care. "I can just tell you what I'm feeling at the time, and I feel a heightened connection with the universe when I'm ramping up," West said. "It is a health issue." He then paralleled it to a "sprained brain," much like a sprained ankle. "And if someone has a sprained ankle, you're not going to push on him more,” West explained. "With us, once our brain gets to a point of spraining, people do everything to make it worse."

And while West has not given a public statement about his current mental health — nor, it is important to note, did Halsey — the singer's call for understanding and compassion is still just as relevant. And, Halsey isn't the only celebrity who has publicly spoken about mental health weighing in. Demi Lovato also indirectly addressed all the speculation on Twitter, writing in part, "It would be nice if for once people can put down the meme making apps and pray for someone who's struggling with mental illness. What happened to compassion?"

She continued, seemingly advising those commenting on West to "take a step back" and realize they might not know celebrities as well as they think they do. She concluded her statements, writing, "Do NOT pretend to know about someone's mental illness if you do not personally know them. Check yourself."

More like this
The Viral 'Little Miss' Franchise Is Focusing On Mental Health Next
By Darshita Goyal
Talking About Mental Health In Sport Is Crucial, Says England Legend Karen Carney
By Sam Ramsden
Ashton Kutcher Opens Up About His Battle With Rare Autoimmune Disorder
By Radhika Menon
Amanda Seyfried Says She Felt Pressured To Shoot Nude Scenes At 19 Years Old
By Jake Viswanath
Get Even More From Bustle — Sign Up For The Newsletter