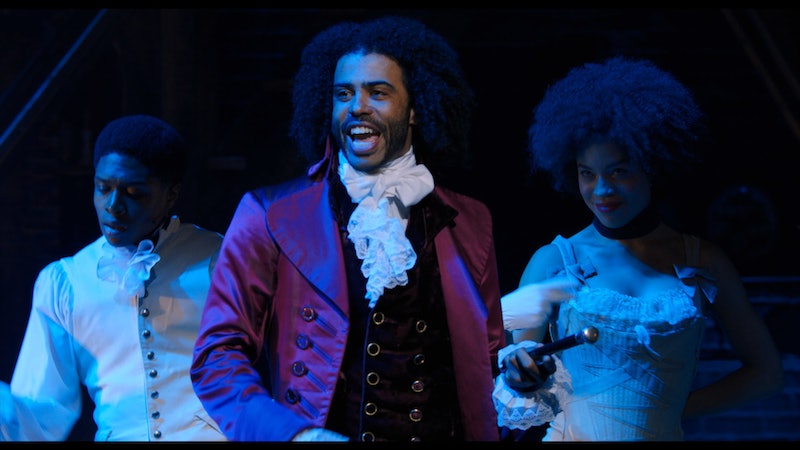 Although Hamilton remains a bonafide Broadway phenomenon, thanks to a new film of the original production on Disney+, some omissions and inaccuracies in the musical are being critiqued — and the cast is more than happy to listen. Hamilton stars Daveed Diggs and Okieriete Onaodowan addressed the show's slavery criticisms in a new interview on Wednesday, July 8. And much like the show's creator Lin-Manuel Miranda, the actors were very receptive to feedback and had their own strong opinions on the issue.

While promoting the film's release on Vulture's Two Friends: A Nice Time Hanging Out With People Who Know Each Other Well, Diggs and Onaodowan were asked about their thoughts on Hamilton's depiction of slavery, which has received some major criticism in light of the premiere and the emergence of global Black Lives Matter protests, not to mention the ongoing conversation about the legacy of racism. Hamilton has been accused of glossing over slavery, particularly the complicity of the Founding Fathers. Diggs and Onaodowan's characters in Act II, Thomas Jefferson and James Madison, for example, were both slaveowners in real life, something which the musical only briefly acknowledges during a rap battle with the title character. And Hamilton himself participated in the slave trade, a facet of his life that is completely absent from the show.

Onaodowan agreed with the criticism in part, explaining that even though the show's success has inspired fans to fight for social justice, its near-erasure of slavery also presents another issue often seen in the U.S. “In the inception of our show, by the omission of that story, it kind of highlights the problem," he said. “It’s getting black kids interested in history to ask the question why they aren’t in history.” In other words, he hopes that kids seeing a mostly BIPOC cast portraying white historical figures will inspire them to look for more diverse historical figures than the ones taught about in schools.

Diggs, who won a Tony Award for his portrayal of Jefferson, said that when he first signed on for the show, he thought it represented both the flaws and virtues of the Founding Fathers, citing how Alexander Hamilton himself isn't necessarily depicted as a hero. He is, after all, shown as a womanizer who was partially responsible for his son's death. But the actor also welcomed the criticism, saying that we should always question art. “I definitely appreciate everybody questioning it, and I think we should continue to do that, and hold our creators accountable, and hold our creative spaces accountable,” he said, adding that Hamilton, though inclusive, was also shaped in part by a white lens. “There’s also the issue of like, what did Lin and Tommy and Jeffrey Sellers, and a whole crew of mostly white producers have the capacity to tell honestly? What parts of the story were ones that they could comment on in any sort of real, grounded way?”

Miranda previously responded to the online conversations on Monday, July 6, saying in a tweet that "all criticisms are valid" and that he wish he could've incorporated more into the story. "The sheer tonnage of complexities & failings of these people I couldn’t get. Or wrestled with but cut," he wrote. "I took 6 years and fit as much as I could in a 2.5 hour musical. Did my best. It’s all fair game."

More like this
Here’s Everything Coming To & Leaving Netflix In February
By Jake Viswanath
Ozzie’s Coming Out Scene With Kitty On 'That ’90s Show' Has Twitter Sobbing
By Brad Witter
'Bling Empire: New York' Star Nam Laks Is The “Blair Waldorf Of Thailand”
By Alyssa Lapid
Hilary Duff Is “Optimistic” About A 'Lizzie McGuire' Reboot
By Alyssa Lapid
Get Even More From Bustle — Sign Up For The Newsletter
From hair trends to relationship advice, our daily newsletter has everything you need to sound like a person who’s on TikTok, even if you aren’t.