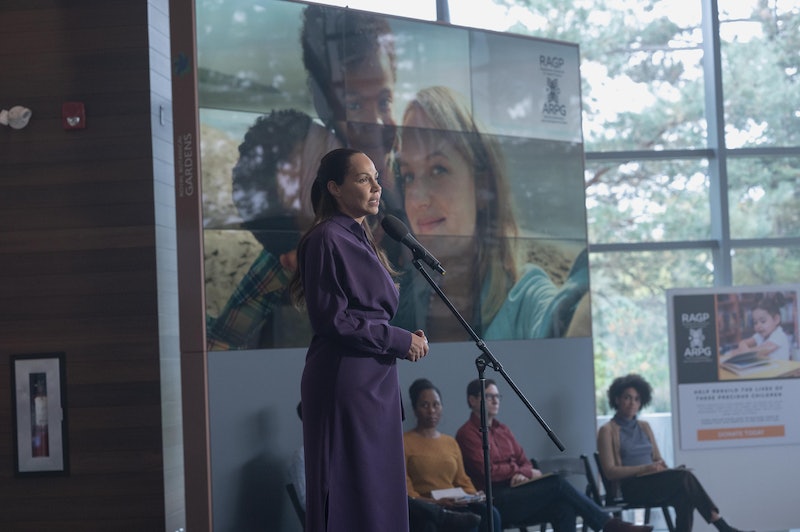 Sophie Giraud/Hulu
By Amanda Whiting
May 5, 2021

Spoilers ahead for Episode 4 of The Handmaid’s Tale Season 4. Serena Waterford is a taker. She took a baby from June. She took a hall pass to Canada from Fred. And now, she’s prepared to take even more.

In The Handmaid’s Tale’s May 5 episode, Serena asks that Rita — the Martha she and Fred literally owned as property in Gilead — visit her in her zen detention facility. Rita is wary but seems compelled by the suggestion that facing her oppressor might be cathartic. Instead, it becomes yet another opportunity for Serena to exploit her.

What Serena wants — what she has always wanted — is a child of her own. Though she’s no longer able to see Nicole because Fred has turned on her, somehow — after all these years of struggling — she’s now pregnant with his son. She shares the news with gentle and pious Rita, who cries and prays with her. “It’s nice to have a friend,” Serena tells Rita, outrageously recasting the relationship between slave owner and slave. Rita says nothing when Serena assumes that she’ll be willing to help her raise the child. Within the bitter confines of Gilead, Serena’s baby would have brought some love and purpose to Rita’s existence. Outside of Gilead, it’s just one more of the Waterfords’ messes for Rita to clean up.

Serena, of course, mistakes Rita’s shocked silence for acquiescence. Soon, an interview prep packet from Serena’s defense team arrives at Rita’s door. Rita is already a state witness, but Serena believes that with Rita’s testimony, she can pin her crimes on Fred. It’s terrible to watch the darkness of Rita’s life with the Waterfords infiltrate her new, light-filled kitchen. But where Serena’s baby reveal dampened Rita’s readiness to confront her captor, the presumption that she might help her evade justice renews her resolve. Rita goes to see Fred, who, like his estranged wife, intimates friendship where only bondage existed. With one dress rehearsal under her belt, this time Rita knows exactly what to say. “We aren’t friends,” she tells Fred, then divulges the news of Serena’s pregnancy. “You deal with your family.”

So far, no one has been able to locate Rita’s American family. She lives in refugee housing she did not pick for herself; she still bakes bread, though now it’s at least for friends. She is physically free, but her life is not her own, its contours still defined by what she’s lost. Being drawn back into the lives of the Waterfords gives her a second chance to assert her freedom loudly, as she couldn’t when she snuck away with Operation Mayday. Telling Fred Serena’s secret may feel like an insignificant way to accomplish this compared to the future that Gilead stole from Rita, but symbolically, it’s a wrecking ball. When Rita refuses to answer some trivial pleasantry, Fred answers, “You’re free to do as you please.” She responds resolutely: “Yes, I am.”

It’s a short sentence and a sea change moment. Coming to Canada liberated Rita from the strictures of Gilead and the scheming of the Waterford house, but she was still somehow beholden to them. She doesn’t reject Serena’s initial visitation request, and when she comes to the prison, she addresses her former bosses as “sir” and “ma’am.” But later in the episode, after challenging Fred and breaking with Serena, Rita sits down with a takeout sushi in her own apartment and says grace. It’s a meal she couldn’t eat in a space she wouldn’t be allowed in Gilead — her first meal enjoyed with the knowledge that the Waterfords won’t be calling again. It’s as free of the past as Rita will likely ever be.