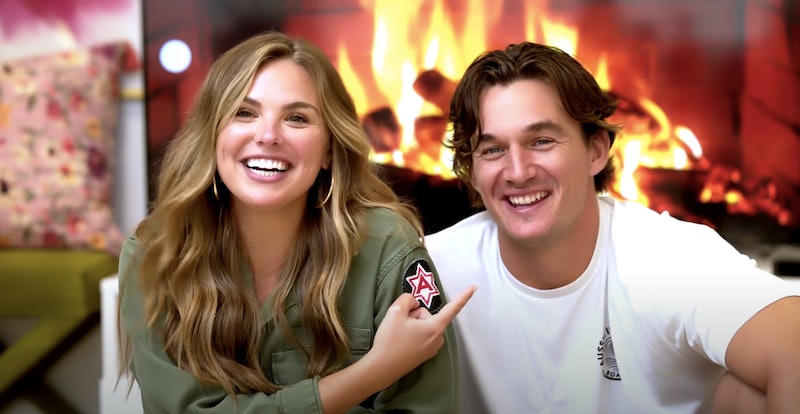 Hanging out with your ex in the middle of a pandemic may sound like a living nightmare to some, but for Bachelorette duo Tyler Cameron and Hannah Brown, quarantine proved to be almost cathartic. They were there for each other at a time when they both needed it most — though, perhaps not in the way fans had hoped. In a brand new YouTube video titled "What Really Happened," Hannah and Tyler discussed what it was really like quarantining together and whether or not it led to them rekindling their former romance.

"We were kind of leaning on each other. We were both going through things, and were kind of like each other's support system all of a sudden," Tyler explained in the video. "You of course have your family there, but it's always nice to have someone to lean on as well." Tyler's mother died just prior to their time in quarantine while Hannah was reeling from her own brother's recent overdose.

The sadness and trauma they were both facing allowed them to become "really close emotionally," according to Hannah. "I wanted to get away from my own trauma so I would say that I traded Tyler's trauma for mine," she recalled. "I also wanted to be there for you."

The two of them, plus a handful of other friends and family, ended up living together at his Florida home for a lot longer than either of them expected as the country went into a full-fledged lockdown. This left them with quite a bit of time on their hands and prompted the creation of the "Quarantine Crew." However, Tyler believed it was in their best interest to keep things strictly platonic. "I didn’t want to do something because I was in a bad place or vulnerable," Tyler explained in the video. "So I made a rule. I was like, 'I’m not hooking up. I’m not doing nothing.' Because I don’t want you to go away … and then we’re upset again at each other."

But even thought they knew that there was nothing going on between them, they could still feel the expectations that were building up from the outside world. "It was a pressure cooker situation," Tyler added. "We were just under pressure the whole time and some of it is our fault because we played into it. We were having fun with it."

This included the two of them sleeping in the same bed for several weeks, though, Hannah assured fans that it never led to anything physical. "People think we were hooking up the whole time," she stated, while claiming that they "never kissed." In fact, there were days when they barely talked to one another, which sometimes left the former Bachelorette feeling somewhat frustrated and confused about where things stood between them.

"I'm at my ex's house with all of his friends," she continued. "I'm like I don't know where I fit. And I think I did a good job of like trying to be okay with the situation that I was in but for me like I was internally freaking out." Meanwhile, Tyler just wanted to work on maintaining a friendship. "If we stepped away and got away from each other and we wanted more, we could always go get more."