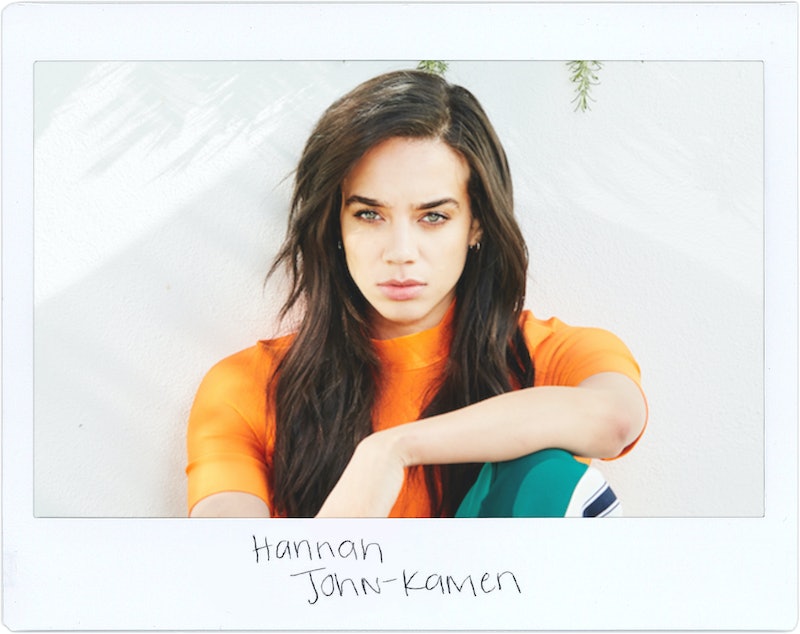 When celebrities (virtually) hang out with Bustle writers, we want to give them the chance to leave their mark. Literally. So we hand them a pen, a piece of paper, a few questions, and ask them to get creative.

"Yes, I still have the hat," laughs Hannah John-Kamen. I had to ask. The British actor, 30, shot to fame, in part, thanks to her role – and headwear – in Netflix thriller series The Stranger, an adaptation of Harlan Coben’s novel of the same name. While the baseball hat helped her character remain incognito, it has arguably done the opposite IRL. "I started getting recognised with [The Stranger ]. I think it was because it was such a high-octane drama and everyone was hooked — I was hooked by the book and the script."

"It’s basically a world where there are no such things as illness, currency, or monogamy," John-Kamen explains. "It’s basically living your best possible life. It's thought-provoking and mirrors a lot of what’s going on now," she says, pointing out how that is what dystopian (or utopian, depending on your point of view) and sci-fi often does. "That’s the magical thing about the genre."

From Marvel's Ant-Man to a stint on Game Of Thrones, Star Wars, Black Mirror, SyFy’s Killjoys, and Steven Spielberg's Ready Player One, Kamen is, quite literally, no stranger to culturally significant movies and TV series. Whether pushing herself physically in a "very hot neoprene suit" as Ghost in Ant Man, or emotionally in The Stranger, John-Kamen says she's lucky to play complex characters that show "depth, strength, weakness, and power," she explains. "I think vulnerability is a strength too," she adds.

For the drama school alumni, acting is both about vulnerability and, most importantly, fun. "As a kid, I always wanted to do this," she tells me. "I can’t remember not wanting to act. I always go by the script, I always go by character, and message. And I just want to have fun. And play something that’s completely daunting and opposite to me so I have to push myself."

"I want to try everything. I want to do things that scare me."

Describe reality TV in one word

More like this
Everything To Know About The 'Daisy Jones & The Six' TV Series
By Maxine Harrison and Brad Witter
Yes, 'The Price Of Glee' Is Available To Watch In The UK
By Catharina Cheung
'Brookside' Is Coming Back & Soap Opera Fans Are Going Wild
By Sam Ramsden
'Magpie Murders' S2 Will Include A *Major* Shake-Up
By Sophie McEvoy
Get The Very Best Of Bustle/UK
Sign up for Bustle UK's twice-weekly newsletter, featuring the latest must-watch TV, moving personal stories, and expert advice on the hottest viral buys.