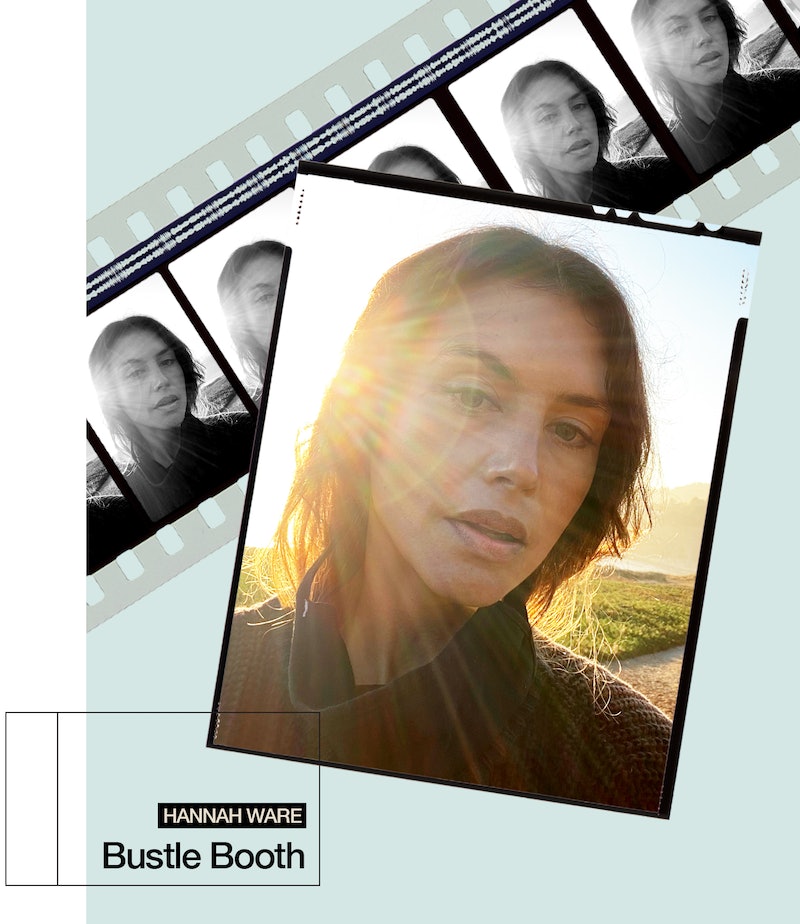 Like most of us, Hannah Ware spent much of lockdown steaming her way through endless boxsets. She finally got round to Mad Men (which passed her by the first time), and enjoyed The Queen’s Gambit and It’s a Sin. Now though, we’re the ones watching her on Netflix’s new hit series, The One.

“It is as much a psychological thriller as it is a futuristic dystopian series,” Ware tells me via Zoom. Adapted from John Marrs’ best-selling 2017 novel of the same name, the eight-part drama revolves around a cutting-edge matchmaking service that enables users to discover the perfect partner through a simple DNA test. “From what my friends have told me, it’s really hard to tell if you’re going to be attracted to, or get on with someone on a dating,” she continues. “So, the fact that The One’s dating app presents you with the one person that you are guaranteed to fall in love with... It wouldn’t be completely out of the realm that people would gravitate to a dating model like the one in the show.”

Ware excels as the lead character, Rebecca Webb, an ambitious CEO and co-founder of MatchDNA, a Black Mirror-esque matchmaking service. When potentially damaging consequences of the technology become apparent, Webb comes under immense scrutiny. Ware found that in itself fascinating, drawing parallels with women in positions of power and the way they’ve conducted themselves in their careers as inspiration for the role.

“I looked at lots of women who sort of came from a point of ideological certainty and lived and worked in quite an extreme way,” says Ware, citing the likes of Theranos founder Elizabeth Holmes and former Prime Minister Margaret Thatcher. “They had to create such a hard shell around them,” she says of the metaphorical armour they donned when faced with push back in their careers. “Especially Thatcher, because she was a woman Prime Minister during the 1980s,” she adds.

Prior to playing Webb, Ware cut her teeth in video game-inspired flick Hitman: Agent 47 with Rupert Friend; 2013’s Oldboy, starting Josh Brolin; and Steve McQueen’s Shame, opposite Michael Fassbender and Carey Mulligan. She’s also known for her roles in Starz drama Boss and Netflix film The Angel. But she is perhaps best-known for her famous sister, pop star and podcast sensation Jessie Ware. Alongside their mother, Lennie, Jessie interviews celebrities over a home-cooked meal on Table Manners.

“I’m surprised and I’m not,” says Ware of her sister’s and mum’s fame, “because I totally understand why [the podcast is] a big deal. They’re brilliant. But, of course, you’re always shocked if people close to you become these sort of cultural figures. It is weird,” she says jovially. She fondly remembers her mother’s “legendary” spaghetti bolognese, summer pavlova with berries, and roast chicken dinner — and the speed at which you had to eat around her sister. “Jessie’s a very fast eater, so sharing a takeaway you’re having heart palpitations. You have to grab it.”

So would she consider joining the family podcast? “I wouldn’t rule it out,” she says. Ware actually recorded a guest appearance on Table Manners shortly after we speak, which fans can listen to now.

You can also get to know more about The One star below.

“You’re going to have to trust me about this one thing. You need a lot more drinks” — Garrett Breedlove, Terms of Endearment.

I don’t watch it!

Would rather drink bleach than sing live.

She wasn’t a total dick.

More like this
Twitter Is Burning As Phoebe Dynevor Reveals Daphne’s 'Bridgerton' Exit
By Sophie McEvoy
Helena Bonham Carter Doesn't Think 'The Crown' “Should Carry On"
By Sam Ramsden
Everything To Know About The 'Daisy Jones & The Six' TV Series
By Maxine Harrison and Brad Witter
Yes, 'The Price Of Glee' Is Available To Watch In The UK
By Catharina Cheung
Get The Very Best Of Bustle/UK
Sign up for Bustle UK's twice-weekly newsletter, featuring the latest must-watch TV, moving personal stories, and expert advice on the hottest viral buys.