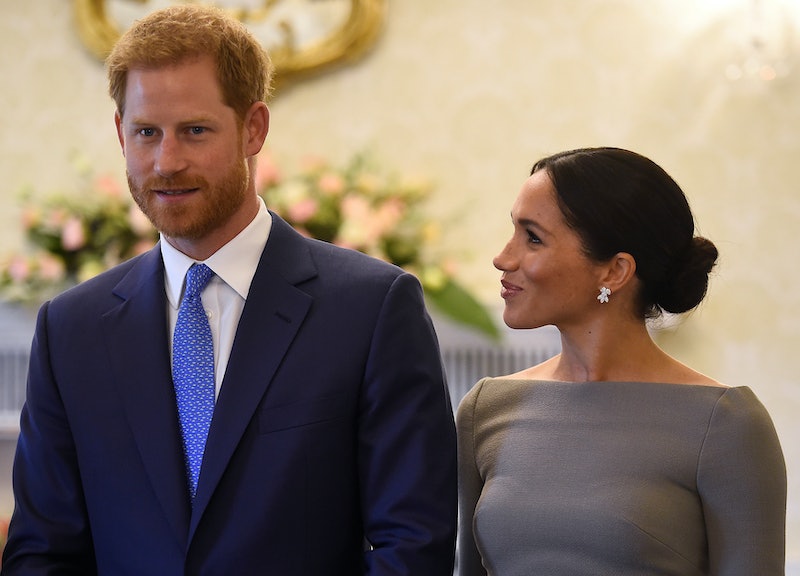 Meghan Markle has reached another royal milestone! On Tuesday, she and Prince Harry touched down in Dublin for their first official tour — and it sounds like the pair have barely had a second to rest on the two-day trip. While in Ireland, they met the President and the Taoiseach, visited Croke Park and Trinity College, paid their respects at the Famine Memorial, and met young coders at tech start-up Dogpatch Labs. So how does Meghan and Harry's first tour compare to Prince William and Kate Middleton, when they visited Canada, in 2011?

Firstly, unlike Kate and William, Meghan and Harry are actually doing two royal tours in their first year as Duchess and Duke of Sussex: they’ll tour Australia, Fiji, Tonga and New Zealand in October. Which is excellent news for international fans of the royals!

To kick-start their Ireland visit, Meghan and Harry met Taoiseach Leo Varadkar and were given a tour of Dublin, the BBC reports, before attending a garden party held by the British Ambassador at Glencairn. The next day, they met with President Michael Higgins, his wife Sabina, and their two giant dogs, Brod and Sioda, People reports. According to Kensington Palace, they also rang the Peace Bell — designed to mark the 10th anniversary of the Belfast Agreement. Then, at Trinity College, there was a treat for calligraphy expert Meghan, the Guardian reports, viewing of 19th Century manuscript the Book of Kells, which she called "amazing, beautiful". The pair also visited the memorial to the Irish famine, which took place under British rule, before taking part in "a festival of traditional Irish sports" at Croke Park, and meeting young coders participating in the CoderDojo scheme at DogPatch Labs.

Kate and William landed in Ontario on June 30, 2011, and departed from Alberta on July 8, the Government of Canada website states. While there, they laid a wreath at the National War Memorial, attended a ceremony welcoming new Canadian citizens on Canada Day, visited paediatric hospital Sainte-Justine University Hospital Centre, and watched traditional drumming, dancing, and singing performed by Indigenous Canadians in the Northwest Territories. A common link between this tour and the Duke and Duchess of Sussex’s post-wedding overseas tour? There was absolutely no free time for a quick cup of tea and a digestive.

Next up — fashion. The Duchess of Sussex left the plane in Ireland in green (a forest green Givenchy jumper and matching pencil skirt, according to Elle) — a very fitting choice! There might be a subtle comment, too, in the black, belted dress she wore to the British ambassador's garden party. It's bespoke Emilia Wickstead, Elle reports, and it could be Meghan’s sweet way of indicating she has no hard feelings towards the designer after the latter was alleged to have criticised her wedding look. Wickstead was reported by the Daily Mail to have criticised Meghan’s Givenchy dress, claiming it was a copy of her own design; however, she subsequently refuted the claims, posting on Instagram:

The Duchess of Cambridge disembarked the plane in Canada in a navy lace dress by Erdem, whose namesake designer, Erdem Moralıoğlu, grew up in both Montreal, Canada, and Birmingham, England. On Canada Day, Kate took the theme and ran with it, wearing a red maple leaf fascinator and diamond maple leaf brooch. And she also made a more personal comment with her wardrobe on the day Princess Diana would have turned 50, the Guardian reports, as Kate chose a grey dress by Catherine Walker, "a favoured designer, friend, and confidante of Diana."

Moving on, what can we glean from the body language displayed by Meghan and Harry on their first official tour, and how does it compare to Kate and William’s? Relationship and body language expert Annabelle Knight found both parallels and slight differences between the couples on their first overseas trips.

She tells me: "William and Kate often mirror each other’s body language, presenting themselves as an equal partnership to the world. Their wide, open smiles show genuine happiness as well as being reassuring to one another.

Knight continues: "Like William and Kate, Harry and Meghan match and mirror one another’s body language, which shows a genuine love and respect for one another. They also use prolonged eye contact to support one another and brief touches to non-verbally touch base, which is what couples do when they are in secure and communicative relationships." Lovely!

Experts see a slight difference between the two couples’ body language. "Kate may be slightly more dominant than William; her body language is often leading. She may place her hand on top of his or shield him by walking, standing or leaning slightly in front of him," Knight explains.

Meghan and Harry are a little more in sync, taking turns to take the lead, says body language, sex, and relationships expert Tracey Cox. The Sussexes are perfectly in tune with each other, Cox says, with neither attempting to dominate the other with their body language. "Instead of both competing for centre stage, they appear to take turns," she says. A perfectly matched couple, it sounds like!

Cox also detects a sweet royal parallel in Meghan’s body language, revealing how similar she is to Diana: she “tip[s] her chin down and look[s] up with big wide eyes," she says. "She does it when looking at Harry: it’s openly adoring and makes him feel ten feet tall." It's more than reciprocated by Harry, she says — the couple share "real smiles that ball the cheeks and reach the eyes", a reflection of "mutual adoration".

And what of their relationship with the public? Both Harry and Meghan are "similarly warm and friendly and not scared to mix with the public," Cox said. Again, sounds like a perfect match.

More like this
How Princess Anne Broke The Rules Of Royal Divorce
By Sophie McEvoy
Sarah Michelle Gellar & Freddie Prinze Jr’s First Date Was Unexpected
By Maxine Harrison
Kate Middleton & Prince William Were Booed & Mocked On Their U.S. Visit
By Jake Viswanath
Kate Middleton Shares The Key To Building A "Happier Society" In A New Op-Ed
By Stephanie Topacio Long
Get The Very Best Of Bustle/UK