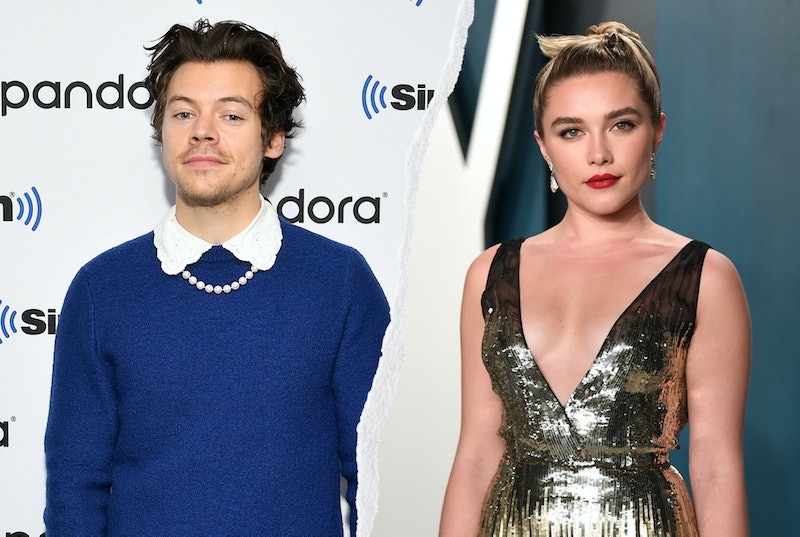 Don't worry, darling, Harry Styles and Florence Pugh's new movie will continue filming in no time. The Olivia Wilde-directed film Don't Worry Darling has temporarily halted production after someone on set contracted the coronavirus. Production company New Line confirmed the news to Deadline, but did not disclose who it was that tested positive.

The film marks Styles' first leading role in a feature film. In 2017, the pop star made his blockbuster debut as a supporting character in Christopher Nolan's Dunkirk. Don't Worry Darling also marks Wilde's second foray into directing after helming the critically acclaimed and Golden Globe-nominated Booksmart. Wilde will also have a supporting role in the movie, joining a cast that includes Styles, Pugh, Chris Pine, KiKi Layne, Gemma Chan, and Nick Kroll. Production officially began in late October and has been ongoing for a couple of weeks.

Although New Line declined to reveal who on set was diagnosed, sources close to Deadline report that it wasn't Styles, Pugh, or Wilde who tested positive. Rather, it was a production member who was in "close enough proximity" to the cast that New Line found it necessary to immediately pause filming. Like all movies that are currently in production, the set has been following strict safety protocols. All cast and crew members are currently isolated, but no one else has tested positive at this time. The quarantine period is expected to last two weeks, as per standard COVID-19 safety guidelines.

Pugh and Shia LaBeouf were originally cast in the psychological thriller's lead roles in April. Per Deadline's report, LaBeouf exited the project in September due to a scheduling conflict, and Styles was then cast in his place. According to a synopsis shared by Collider, the film is set in the 1950s in an isolated utopian community within the vast California desert. Pugh will portray an unhappy housewife who begins to notice strange occurrences and wonders if she's losing her sanity. Styles will portray her husband, who genuinely loves her but may be hiding something. Pine, for his part, will play the "revered leader of a mysterious worksite" where all of the community's men seem to work.

Of course, this is far from the first movie set to be hit with the coronavirus. Most recently, Robert Pattinson tested positive for COVID-19 while shooting The Batman, forcing production to be delayed by several weeks. Although filming has already begun on Don't Worry Darling, it has not yet received a scheduled release date, so it's unknown whether this delay will impact when it hits theaters (or a living room) near you.