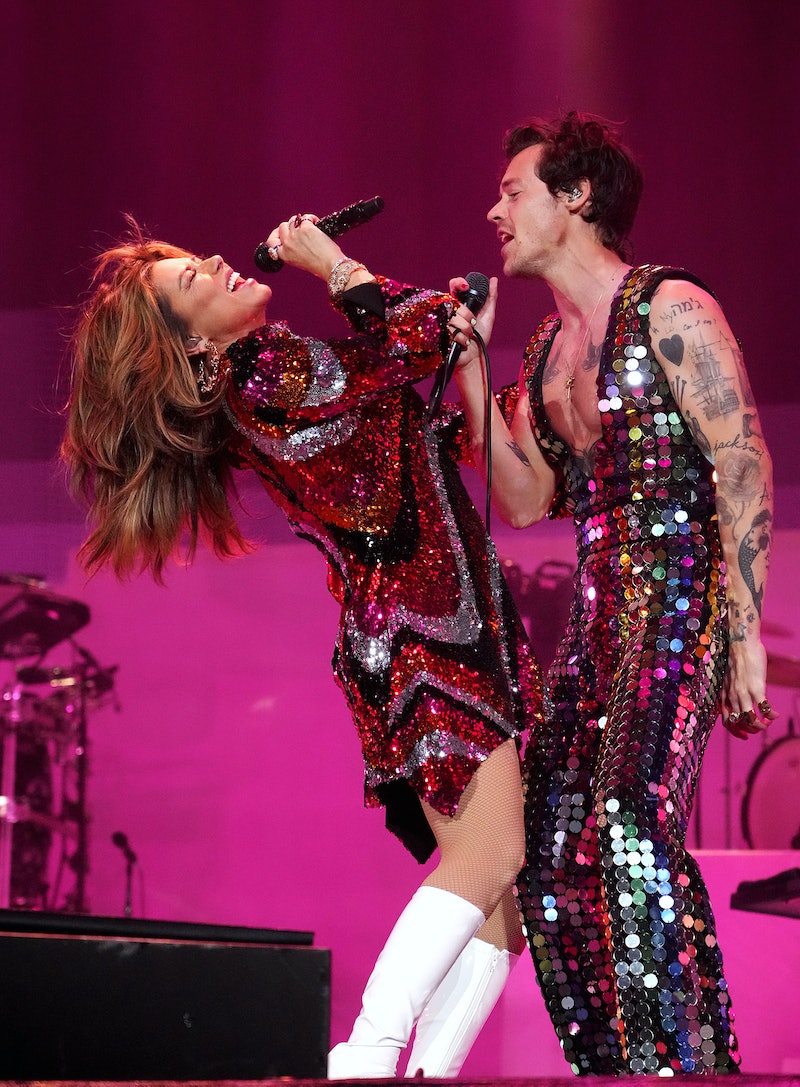 Headlining Coachella is a big deal, so it never hurts to have some tricks up your sleeve. For Harry Styles, that meant both debuting new music and bringing out pop-country music icon Shania Twain during his April 15 show. The two stars shined together during Day 1, and each seemed elated to share the stage. When they weren’t performing duets to some of Twain’s greatest hits, the musicians adorably gushed over one another.

Telling the crowd that his job was to entertain them, he promised they’d “do our absolute very best,” per Variety. Fittingly, he brought out Twain and shared how her legendary career had had an impact on him. “This lady taught me to sing,” he said between songs, recalling how he’d listen to her with his mom while riding in the car. Addressing the five-time Grammy winner directly, he told her he’d be “forever grateful” for those memories.

For her part, Twain matched Styles not just in sparkles but also in enthusiasm. She told the audience that she was “so honored and thrilled” to join the former One Direction member at the music festival. “I’m a bit starstruck, what can I say?” she added. “No, really. I’m a fan of you, of course.”

Styles and Twain performed their duets to both the ever-catchy and empowering anthem “Man! I Feel Like a Woman!” and the love song “You’re Still the One,” both of which were massive hits in the late 1990s. Noting how Styles would have just been a small child listening to the latter song, Twain said it was “kind of a dream and very surreal” to be on stage and performing it together. “I think I’m just in love and this song is all about love,” she added.

Seeing the two singing together was something a lot of fans had long been hoping for, especially considering the This Morning interview Twain gave in October 2020 that revealed they’d been texting each other “off and on about music and toying with the idea of doing something together.” Not surprisingly then, their performance got a lot of love on Twitter — and so did their chemistry. Fans liked everything from how Styles was looking at Twain to their “matching outfits.”

In general, it was a 10/10 for many fans. “Not to be dramatic but harry styles performing with shania twain is what brought jesus back from the dead,” one fan tweeted.

By the end of the night, Twain was still on a high. She took to Twitter herself to tweet about Coachella, keeping it short and sweet: “I mean c’mon…. HARRY STYLES,” she wrote, alongside three flame emojis.

After their successful showing at the music festival, let’s hope their potential collaboration is much closer to becoming a reality.

More like this
Olivia Rodrigo’s Song Dedication To 5 SCOTUS Justices Sent A Strong Message
By Grace Wehniainen
Lily Allen Was “Quite Emosh” After Performing Sober At Glastonbury Festival
By Stephanie Topacio Long
Adele’s All-Female Lineup Includes Kacey Musgraves, Mahalia, & Self Esteem
By Shahed Ezaydi
Harry Styles Helped A Fan Come Out As Gay In Dramatic Fashion At His London Show
By Jake Viswanath
Get Even More From Bustle — Sign Up For The Newsletter