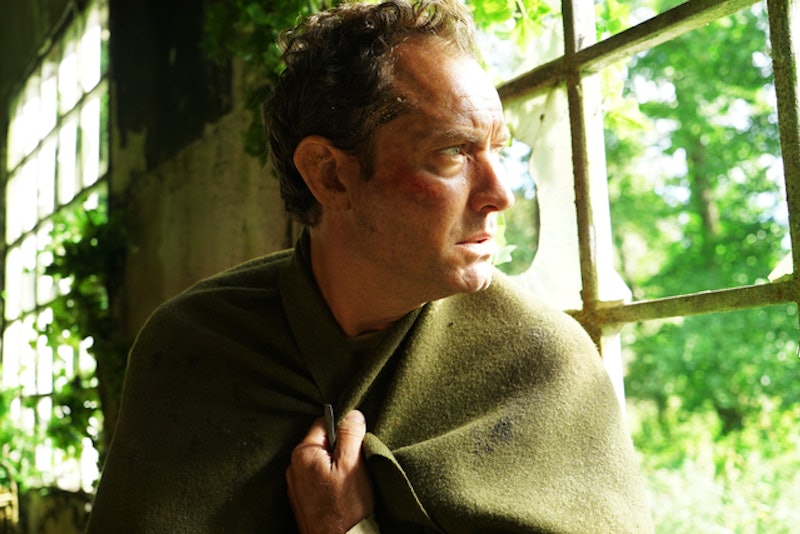 Spoilers ahead for the Season 1 premiere of The Third Day. If you watched the first episode of The Third Day, you were likely just as confused as Jude Law's character, Sam. The new HBO drama is a surrealist mystery from beginning to end, following Sam as he navigates the increasingly weird goings-on of Osea island. The show opens disorientingly, with Sam alone in the woods. He receives a phone call that 40,000 pounds in cash has been stolen from his office. Unable to do much from afar, he finishes what he was doing: sobbing next to a river and then placing a child's shirt into the water to float downstream. Afterward, he makes his way back to the car but stops when he sees a teenage girl named Epona attempting suicide.

Sam is able to save Epona and insists on driving her home, which lands him on a long detour to Osea. After arriving, he stays a few minutes too long and gets stuck for the night, as the island is only accessible during certain parts of the day when the causeway isn't underwater. What unfolds from there can only be described as incomprehensible and bizarre, but here's my best attempt at explaining WTF just happened.

Who Is the Little Boy?

Just before Epona's suicide attempt, Sam sees a boy helping her in the woods. He has curly hair and is wearing a striped shirt with red shorts. When Sam later asks Epona who the boy was, however, she acts like no one was there. She could be lying, or the boy could be a figment of Sam's imagination. He later sees the boy on Osea, but when he chases him, he can't catch up. It's possible that the boy is connected to Sam's son, as it's implied that something bad happened to one of Sam's children. He says throughout the episode that he has two girls and a boy, but the pub owner's wife in Osea recognizes him as the man who made "appeals" on TV after he lost his "precious little angel."

At the start of the episode, Sam dropped a striped child's shirt into the river, perhaps in an act of mourning, so it's probably not a coincidence that the little boy Sam keeps seeing is also wearing a striped shirt. If the boy is meant to be his son, it doesn't make sense that he would ask Epona who it was. But he and the boy do seem connected in some major way.

Sam is convinced that Epona is hiding something, and the whole town of Osea seems to be too. They're alarmingly unconcerned about her suicide attempt, saying that she's totally fine now and Sam has nothing to worry about. But Epona is obviously afraid of her father, and she mentions to Sam when he first saves her that someone was going to kill her. She also ominously says that Sam has no idea what the people in Osea are capable of. She's talking about their creativity in regard to the upcoming music festival, but there's clearly something shadier at play here.

What Do the Grasshoppers Mean?

Right before he sees Enola, Sam is transfixed by a large orange grasshopper on a tree. He sees a similar grasshopper on the road to Osea, but when he kicks it over, it's dead and small beetles crawl out of it. It's not the first time Sam sees imagery of animals being split open, as he also stumbles upon a dead squirrel in Osea that was seemingly sacrificed for a ritual. The squirrel's organs were placed carefully around its body in some kind of shrine.

The imagery of things being slashed — which particularly come up in Sam's drunken dream/vision of the bloody cave filled with animal bodies and a bloody child's blanket — may point to a legendary killer. The real town of Osea was started by Frederick Nicholas Charrington, who some believe was Jack the Ripper. In the show, Osea folklore also says that a water creature will cut the evil out of people, so there's a lot of cutting and slashing imagery going on.

Grasshoppers themselves are supposedly symbols of good luck. The one seen before Epona almost died could signify her good luck at being saved. The dead one on the road to Osea could signify that Sam will not have good luck if he forges on to the strange town.

Did Sam Rob Himself?

Sam was going to use the 40,000 pounds stolen from his office to bribe a planning officer into approving designs for the garden center he runs with his wife. When the money goes missing, Sam calls him and accuses the planning officer of stealing it. After all, no one but he and Sam supposedly knew where the money was. The planning officer denies this and also decides not to push Sam's plans through. At the end of the episode, Sam finds rolls of money in a bag in the back of his own car. He was drunk at the time, so he's an unreliable narrator — especially since he's already been having strange visions — but it's possible that he was the one who took the money all along. Sam seemed confused about the money's appearance in his car, so maybe he didn't know he took it or maybe it was planted there to frame him. Either way, his business is definitely going to be in trouble when he gets back — if he gets back. It seems unlikely that Sam will be getting off of Osea island any time soon.

Has Sam Been to Osea Before?

When Sam first pulls up to the island with Epona, he remarks that "it feels familiar," even though he's never been there before. He explains that his grandfather was stationed on the island during the war, so he knows a bit about it. The bartender's wife also recognizes Sam, though she said it was from his TV appearances. But maybe she's seen him in person before, too? Sam has that very specific vision about the bloody cave, which could very well be a real place on the island that Sam visited in the past. Between that and finding the money in his car, it seems like Sam may have been doing things and going places without realizing it. If he feels like Osea is familiar, it's probably more than deja vú.