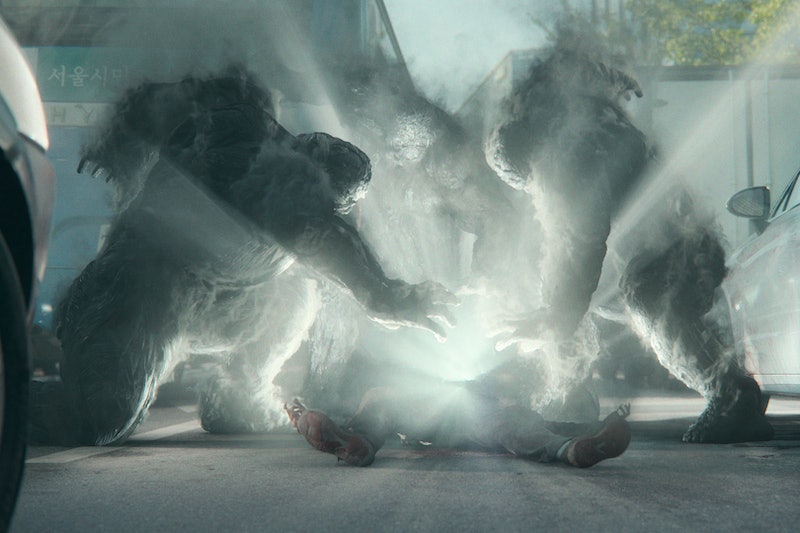 Spoilers ahead for Hellgame Season 1. The latest streaming phenomenon has arrived in the form of Netflix’s Hellbound. The South Korean drama is based on the digital comic of the same name, and follows the story of otherworldly creatures who arrive on Earth and condemn people to hell in what is referred to as a “decree”.

The supernatural events cause mayhem and see a religious group, known as The New Truth, grow in influence. However, some people grow suspicious of the group and begin to question their involvement in the strange goings-on. On Nov. 20, Hellbound became the most-watched TV show on Netflix, with many viewers likely marathoning the platform’s latest hit right through to the show’s finale episode.

If you’ve been left scratching your head after the drama’s finale, or are curious to discover what the last episode has set up for a potential season two, you can find a complete (spoiler-filled!) breakdown of Hellbound’s ending here.

Much of Hellbound season 1, episode 6, centres on the character of Bae Young-jae and his wife, Song So-hyu. The pair learned that their newborn baby has been condemned to hell. Television producer Bae is a sceptic of The New Truth religious group, and strongly dislikes their power over the South Korean media. Meanwhile, his wife Song is a New Truth supporter and initially believes that their baby must be evil and deserves to be banished to hell.

Bae cannot accept his newborn’s fate and seeks the help of a sociology professor named Gong Hyeong-joon, who then leads Bae to an exiled lawyer, Min Hye-jin, who is also a major New Truth sceptic. She then advises Bae to broadcast the banishment of their baby to the world, as it would prove that The New Truth are not an authentic organisation because a newborn baby could not possibly have sins to be condemned for. The New Truth Society attempt to prevent the public from finding out about the baby’s decree. However, they fail to do so and the word quickly spreads.

As promised, the time of the baby’s decree arrives, and the supernatural monsters appear to take the newborn down to hell. However, Bae and Song fight to save their child as the demons scold the trio with a bright light that leaves them as burned corpses. Miraculously, the baby survives the decree, marking the first time anyone has ever managed to survive. This revelation, which was witnessed by many on social media, suggests that people may have the ability to sacrifice themselves in order to save someone else.

It isn’t long before The New Truth catch wind of what went down, and the group attempt to restore order with the help of the police. However, their authority has been significantly diminished by what unfolded.

The exiled lawyer Min, who previously advised Bae to broadcast his baby’s decree, manages to escape with the infant. She gets into the back of a taxi with a driver who informs her that he is not a believer in the New Truth either, and drives her and the youngster away.

But that’s not all. The final moments of the finale take place at the home of Park Jeong-ja, a now-deceased woman whose decreed end was the first to be broadcast to the world years prior. Her televised demise is what made The New Truth such a powerful force within South Korean society.

The home of Jeong-ja has since been renovated into a religious museum by The New Truth, and a glass case has been placed over the exact spot of her decree. However, her body suddenly appears in a flash of light inside the glass case, suggesting that the woman has somehow resurrected.

This surprising finale twist adds to a string of unaswered questions, like: Can people actually survive their decree? Who is ordering people’s condemnation to hell in the first place? What is the real motivation behind The New Order? Where did Min and the newborn drive off to? And how and why was Park Jeong-ja resurrected from hell? Fingers crossed we find out in Helbound Season 2.