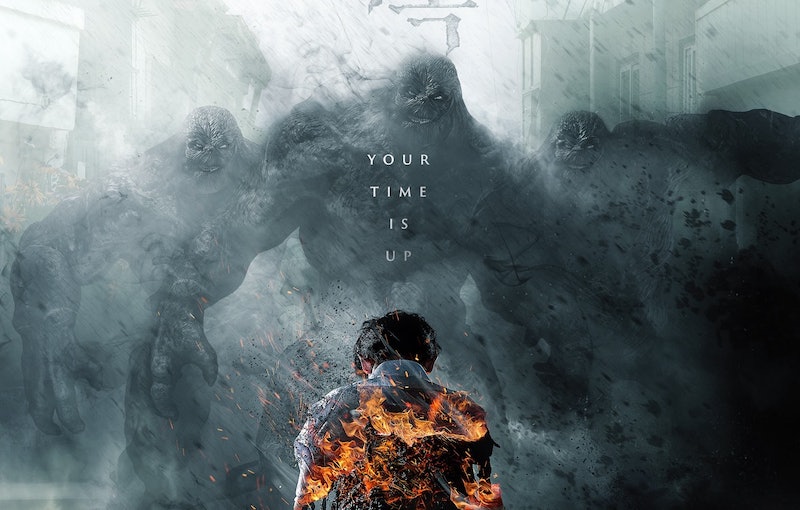 Spoilers ahead for Season 1 of Hellbound. Netflix’s latest South Korean horror series Hellbound has surpassed Squid Game — which is the streaming platform’s most-watched series ever — in daily streams to become Netflix’s next big thing. Hellbound became the No. 1 TV show on Netflix on Nov. 20, following its Nov. 19 release, according to FlixPatrol. The six-episode series follows what happens when a supernatural creature prophesizes a person’s time of death. When that day eventually comes, three demons appear to take the person’s soul and condemn them to hell.

Rather than fixating on why otherworldly monsters are appearing out of nowhere to drag humans to hell, the show primarily focuses on how people respond to a religious organization called The New Truth, which manipulates society through fear and propaganda to promote their agenda of creating a more righteous society. Jung Jinsu, the organization’s chairman and founder, claims that these supernatural acts are God’s way of punishing those who sin.

Hellbound has been described as “your next demonic obsession” by Thrillist, and fans have been praising the show ever since it premiered. As of late November, there’s no word on whether the series will return. But there’s a possibility that it could because of its popularity (similar to Squid Game’s delayed Season 2 confirmation), especially with more questions raised from storylines such as Deacon Yuji’s arrest and Min Hye-jin getaway plan with Toughie.

Here’s everything to know about what to expect from a potential Hellbound Season 2.

Season 1 of Hellbound featured an array of characters. Some of them give in to the chaos inflicted by The New Truth, while others brush off the cult’s power and influence. It’s likely that if the show returns for another season, so too would several of the original characters, including Jin Kyeong-hoon (Yang Ik-june), Bae Young-jae (Park Jeong-min), Song So-hyun (Won Jin-ah), Min Hye-jin (Kim Hyun-joo), and perhaps even Jeong Jin-soo (Yoo Ah-in), despite his death in Season 1.

The Season 1 finale gave viewers a lot to think about in terms of what might happen in Season 2. In the drama-packed episode, Soyhun asks Deacon Yuji why her baby, Toughie, has been decreed to death despite never having sinned. The New Truth then calls a meeting to cover up the big lie that one must sin in order to be condemned to hell.

Ultimately, The New Truth decides that Soyhun and Toughie must be isolated so that no one figures out that they’ve been lied to all along. The good news is that Min Hye-jin is able to rescue the family and bring them to a safe house; the bad news is that when the parents tie themselves up around the baby in an effort to protect him, it is they who burn when the demon arrives.

When Lee Dongwook, a YouTuber who believes that he is the messiah, sees that Toughie is still alive despite being sentenced to death, he attempts to stab him. But the monsters ultimately come for Lee, which begs the question: Is Toughie the new messiah? Hopefully, this question will be answered in Season 2, but if not, the mystery of Park Jeon-ja’s fate still remains.

At the very end of the finale, the camera shows Jeong-ja’s burnt corpse following her death earlier in the season. When she initially died, it was broadcast by The New Truth as a means of instilling fear into society. However, in the episode’s final moments she seemingly starts coming back to life. Is it possible that those who are condemned to hell aren’t condemned forever? Is it possible that they never went to hell at all? These are answers only a second season could provide.

The trailer and premiere date for the next season of Hellbound has not yet been released. However, viewers are anxious to find out what happens next in what CNN calls “the new Squid Game.”

While you wait for confirmation about a second season, watch this video that explains Season 1's ending and provides Season 2 theories.

This post will be updated with more information about the Hellbound Season 2 cast, premiere date, and trailer when available.

More like this
'The Queen’s Gambit' Season 2 Tweet Wasn’t From Anya Taylor-Joy
By Mary Kate McGrath, Jack Irvin and Grace Wehniainen
Netflix Shut Down 'Bridgerton' S3 Rumours About A “Very Dark” Storyline
By Bustle
Bill & Frank’s 'The Last Of Us' Episode Has Twitter Emotionally Wrecked
By Alyssa Lapid
'The Crown' Season 6 Has Suspended Filming "Out Of Respect" For The Queen's Death
By Bustle Staff
Get Even More From Bustle — Sign Up For The Newsletter
From hair trends to relationship advice, our daily newsletter has everything you need to sound like a person who’s on TikTok, even if you aren’t.