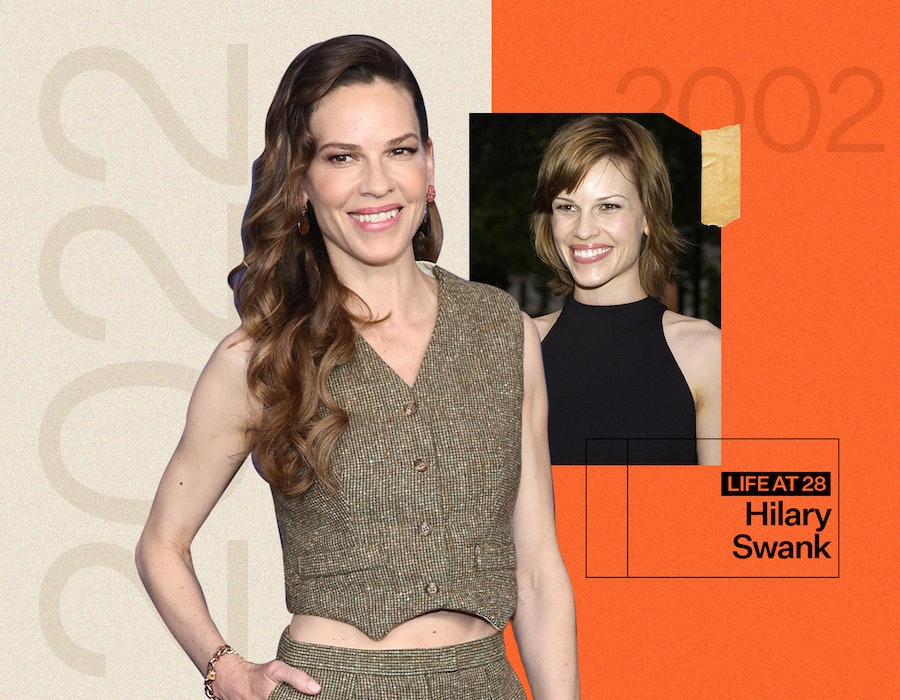 Hilary Swank doesn’t mince words when it comes to life in her late 20s. “I was shot out of a cannon into fame,” the actor tells Bustle. Though she’d been acting since she was 15, appearing in the fourth installment of the Karate Kid series and Beverly Hills, 90210, it wasn’t “a slow buildup” to becoming a household name. Instead, Swank achieved overnight stardom at 25 when she won an Oscar for the biopic Boys Don’t Cry, in which she starred as Brandon Teena, a trans man who becomes the victim of a hate crime. “It was a big moment because of the types of stories that I wanted to be a part of — stories that broke open the blinders of how I see the world,” Swank says. “That's what your twenties are really about, getting out there and experiencing everything in a larger way.”

Five years later, Swank won the Academy Award yet again, this time for her star turn in Clint Eastwood’s Million Dollar Baby. But for all the accolades coming her way, Swank struggled to let herself slow down and actually enjoy the fruits of her labor. “I wasn't very good at having fun for a long time. I was so driven, which you should be in your 20s. For me, it was all about chasing that next project,” says Swank, who has never been a partier and didn’t start drinking wine until she was 31. “I had a fear of not living to my fullest potential for a long time. So I wanted to make sure that I was seeing the scripts that were out there, knowing what directors were looking for, taking meetings.”

In the years since, Swank, 48, has come to prize a healthy work-life balance. “It took to getting into my 40s to really be confident and walk securely in my own shoes,” she says. These days, that means carving out a new niche playing hardscrabble journalists. She’ll do it first on the ABC series Alaska Daily, playing a reporter investigating the disappearances of indigenous women in the state — and next in the thriller Mother’s Milk. Yet Swank still makes sure to take time for fun, whether that means baking pies or going to craft fairs. “I'm learning how to spin wool, so even just today, I was wondering if there were any yarn shows going on.” Both work and life, on her own terms.

Below, Swank discusses Million Dollar Baby, biking to the Independent Spirit Awards, and her pet parrot.

When I was 28, I was about to do Million Dollar Baby. I wasn't someone that people could easily define. They didn't look at me and say, "There's a lot of roles that she'd be right for." There weren’t even a lot of androgynous types of roles, and my hair was short for a long time. I was getting a lot of tomboy roles, a lot of sports roles. Obviously, Million Dollar Baby fits right into that perfectly. I was searching for character-driven stories: characters that really had something to say, something to complete, and something to find. All the things that I felt in my twenties.

Finding success so young, did you ever feel the need to prove that it wasn’t a fluke?

I agree. But I think it’s something we fall prey to, particularly as women.

After winning the Academy Award for Boys Don't Cry, I found that you don't go anywhere higher than that. It's the biggest thing that can happen to an actor. And I think that's when you get in trouble if you're trying to match that. You have to just remind yourself, “I'm here because I love being a storyteller. I love the nature of everything that goes into it and the research and stuff.” So I had to get back into the sandbox and just play.

Making movies in itself is a crapshoot. You never know when something's going to work because you're really only as good as your weakest link. As Clint [Eastwood] said, "You aim for the bullseye, but you don't always hit it." The journey has got to be the reward and the experience, not the end game. I had to refocus on that and make sure that I didn't worry about expectations, because that can kill creativity.

I never partied. It's definitely not my thing. I was also quite nerdy. I had a parrot, I would knit, and I would go to craft shows. I was learning how to bake pies — how to make a nice crispy crust and get the middle just right. And for me, the trick to getting the middle right is to double the fruit and split the sugar in half. It makes a nice, tart pie — and put a little squeeze of lemon in it.

I need to hear more about this pet parrot.

My parrot's name is Seuss, after Dr. Seuss. I still have my parrot. They live 80 to 90 years. She's about 30 years old, and she's hilarious.

My regrets are from when I was shot out of a cannon [after winning my first Oscar]. People came around me like, "This is what you do, this is how you act, and this is what you wear." So I was quickly put together in this way that didn't reflect me. I'm a fierce advocate for people being themselves, but I was so young that I was almost scared out of being myself.

A good example would be when I went to the Independent Spirit Awards for Boys Don't Cry. I was staying at a hotel that was four hotels down from where the ceremony happened, and I was told to get in a car to go there. But the car ride would take an hour and 15 minutes because there was a line for people to get out and walk the press line. I was like, “I'm just going to ride my bike down there.” They were like, "You can't do that.” I put my foot down, and I did it. And it was funny because people were like, "Oh look, she's showing up on her bike. What an independent spirit!" It was just a good example of honoring yourself and what you want to do in life to have fun and to make yourself unique.

Has there been a moment in your career where you felt like you’ve made it?

Sigourney Weaver was on Entertainment Tonight or something, and they asked her, “Who do you feel should be remembered at the end of the year?” And she said, “Oh my gosh, Hilary Swank and Boys Don't Cry." I was like, "Sigourney Weaver knows who I am?!"

More like this
Elizabeth Debicki On Her Approach To The Most Debated Scene From 'The Crown'
By Grace Wehniainen
Michelle Williams Laughs Often About Motherhood Thanks To 'The Fabelmans'
By Marina Watts
Marcus Mumford, Open Book
By Ilana Kaplan
How The Thanksgiving Episode Of 'Gossip Girl' Changed Pop Culture History
By Gabrielle Bondi
Get Even More From Bustle — Sign Up For The Newsletter