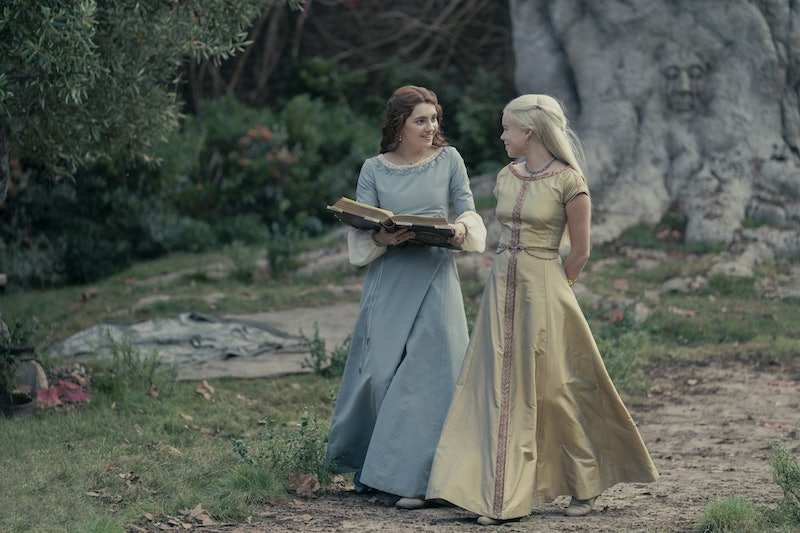 Game of Thrones fans might be a little confused about the origin of the upcoming HBO series, House of the Dragon. While the spinoff is a continuation of the series, the story it tells is a prequel set 200 years before the events of Game of Thrones. To confuse things further, the book that House of the Dragon is based on — 2018’s Fire & Blood by George R.R. Martin — actually begins 300 years before the main series, as it tells at great length the rise and fall of the House Targaryen.

While Martin has been praised for his intricate world-building and dry humor, the reactions to Fire & Blood were decidedly mixed at best. Without the engaging pull of the five novels in the Song of Ice and Fire series, Fire & Blood is more like a glorified encyclopedia experience for readers who were on their way to being true students of Westeros lore. As The Guardian put it, “To understand the disappointment with which Fire and Blood will inevitably be greeted by all but the most committed Martin aficionados, imagine Tolkien choosing to follow The Two Towers with an almost decade-long wait for a sequel, and releasing The Silmarillion in between.”

In other words, Fire & Blood is not the most popular entry in the Game of Thrones series. So, the new HBO series took note and decided to make a significant time jump to get the story moving at a more exciting pace. Let’s break down what Fire & Blood is all about and how House of the Dragon could shake up Martin’s novel.

What Is The Targaryen Civil War?

While Game of Thrones fans know how the Targaryen legacy ended in madness, cruelty, and betrayal, Fire & Blood details all that came before greed and ambition took down the powerful family. Spoilers ahead for Fire & Blood.

Splitting the book into six parts, Martin chronicles the family's multi-generational reign, starting in the year 1 AC with Aegon I Targaryen and following the subsequent rulings of King Aenys I Targaryen, King Maegor Targaryen, Jaehaerys Targaryen, Viserys I, and Rhaenyra Targaryen. These are all characters who might’ve been mentioned in passing in Game of Thrones, but they will play a more prominent role in House of the Dragon, especially Rhaenyra (played by Emma D’Arcy).

The first part of Fire & Blood details the rise of the House Targaryen, beginning with Aegon I’s triumphant conquest of the Seven Kingdoms of Westeros. But House of the Dragon will skip ahead and start halfway through the book, focusing on the Targaryen civil war, or the “Dance of Dragons,” that took place during their reign of power. The catalyst for the moment comes with the death of King Viserys I, as both Rhaenyra and her half-brother Aegon II engage in a war of succession over the Iron Throne, leading to death and carnage. As for how Rhaenyra’s uncle, Daemon (played by Matt Smith in the show), is involved, he supports the princess, and the two actually get engaged in true Targaryen fashion. It’s unclear if House of the Dragon will pair the uncle and niece together, but the trailers suggest they might be at odds with one another.

Fire & Blood isn’t the first spinoff by Martin, nor will it likely be his last. He has published Tales of Dunk and Egg, and other novellas set nearly 100 years before the events of Thrones. Even Fire & Blood is only half of a planned set of books detailing the entirety of the Targaryen reign and downfall.

That said, while it might seem blasphemous to say so, there’s no absolute necessity to read Fire & Blood to understand House of the Dragon. Unlike when Game of Thrones first premiered, fans of the HBO series will already know the houses, names, and mythology, even if the specifics are a mystery. Compare this to the first few Thrones seasons, where book readers were at an advantage, having become acquainted with the world and taking stock of the growing cast of characters and their ever-changing alliances. For casual and hardcore fans, House of the Dragon is equally new and familiar territory.

More like this
Alicent's Green Dress In 'House Of The Dragon' May Be An Act Of War
By Kadin Burnett
'House of The Dragon' Episode 6 Will Take Place A Decade After Episode 5
By Kadin Burnett
Nicola Coughlan Shared A Lady Whistledown Excerpt From ‘Bridgerton’ Season 3
By Grace Wehniainen, Alyssa Lapid and Sam Ramsden
This Episode 6 Moment Foreshadows Viserys' Fate On 'House Of The Dragon'
By Grace Wehniainen
Get Even More From Bustle — Sign Up For The Newsletter