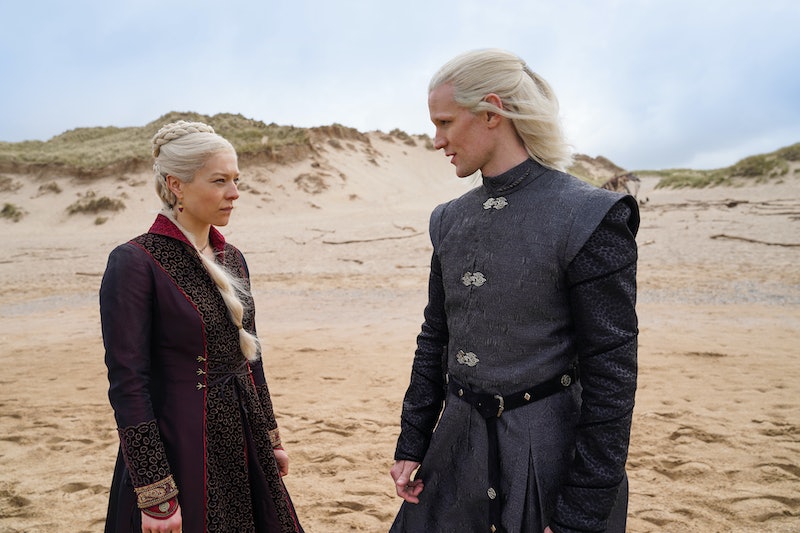 From the Kings Landing setting to the “Dracarys” fire-breathing dragon command, the House of the Dragon’s references to Game of Thrones seemed fairly obvious in the premiere episode. After all, the HBO prequel centers on House Targaryen which viewers already knew well, thanks to the arc of Daenerys Targaryen (Emilia Clarke) in the original series, based on the works of George R.R. Martin.

As the time-jumping episodes began playing out, discerning fans began picking up on much more subtle GoT Easter eggs, of which there are plenty. Despite the existence of the hidden gems, actor Paddy Considine, who plays King Viserys, made it clear in an August interview with The Hollywood Reporter that he hopes fans will judge HotD on its own merits. “I don’t want it to be one of those Easter egg-y shows — ‘Oh there’s Boba Fett’s helmet,’ and all that. There will be little things where fans will go, ‘Is that what I think it is?’ But it’s not a show relying on Easter eggs to get by,” he explained. “It’s a great narrative. It’s a family drama. There are all kinds of great stuff in it. It’s very much steeped in the world of Game of Thrones and not a spinoff where they’re trying out new stuff.”

That certainly has seemed to be the case following the HBO series’ record-breaking premiere. Even the closest watchers are bound to miss things (and not just because of the dark scenes), so here are all the major GoT Easter eggs so far.

Months before HotD premiered, one eagle-eyed fan on Reddit noticed that a necklace that young Rhaenyra (Milly Alcock) was wearing in a promo image included the sigils of each of the GoT noble houses, including the Starks and Lannisters. The jewelry would eventually appear in the premiere when the princess wore it when her father, King Viserys, offered her the Iron Throne.

On the topic of the coveted Iron Throne, other viewers also noticed that the HotD premiere included a parallel image of Rhaenyra that very closely mirrored one of her descendent, Daenerys from the controversial GoT series finale.

In HotD, Prince Daemon Targaryen (Matt Smith) wields the Dark Sister sword against Ser Criston Cole (Fabien Frankel) in the Heir's Tournament, but that wasn’t the first time GoT viewers had heard of the famed weapon made of Valyrian steel. During Season 2, Arya Stark (Maisie Williams) explained that Visenya Targaryen, the sister-wife of Aegon the Conqueror, used Dark Sister in battle.

During a conversation with Alicent at King’s Landing, Viserys references the bloodmages (i.e. practitioners of blood magic) of Valyria. Though most of them died out, the powerful sorcery was seen again in GoT Season 1 when Mirri Maz Duur (Mia Soteriou) used her knowledge of blood magic to kill Daenerys’ son and leave Khal Drogo (Jason Momoa) in a vegetative state.

Perhaps the more well-known Valyrian steel weapon is the catspaw dagger, which was introduced in both HBO series’ premieres. Viserys and Rhaenyra hold the weapon in fire, explaining its great power. The Valyrian dagger made another comeback in HotD Episode 7 when Queen Alicent (Olivia Cooke) uses it to attack Rhaenyra (Emma D'Arcy), slicing her arm. As GoT fans may well remember, Arya would later use the dagger to slay the Night King.

Attempting to dissuade Rhaenyra from appointing Ser Criston Cole to the Kingsguard, Otto Hightower (Rhys Ifans) referenced House Crakehall as one of the crown’s staunchest allies. The reference was an easy one to miss, as the name was only briefly mentioned in GoT Season 3. While out for a walk with Sansa Stark (Sophie Turner), Tyrion Lannister (Peter Dinklage) joked, “Anyone named Desmond Crakehall must be a pervert.”

Speaking of Sansa and Tyrion, who was a literal second son, the GoT Season 3 episode in which the duo marries was also titled “Second Sons.” The original HBO series also features a sellsword company of the same name whose members eventually pledged their loyalty to Daenerys. Meanwhile, the term was also mentioned on HotD in a conversation between Daemon and Lord Corlys Velaryon (Steve Toussaint) during which the latter points out their own positions, noting that their worth “must be made.”

Episode 3 formally introduced members of the Lannister family, namely twins Lord Jason and Tyland. The actor who plays the brothers in HotD might look familiar to the most discerning fans, as he also portrayed the relatively minor character, Ser Hugh of the Vale, in two GoT Season 1 episodes.

HotD’s third episode also includes a GoT callback when Rhaenyra spotted the magical creature, further connecting the princess to similarly marriage-averse Arya, who also saw a symbolic white horse during Season 8. Another Easter egg? Joffrey Baratheon (Jack Gleeson) also had a ship of the same name in his royal fleet.

The opening of Episode 4 finds Rhaenyra noting that one of her suitors named Lord Dondarrion is much older than she. As pointed out by Inverse, the HotD character is likely an ancestor of Beric Dondarrion (Richard Dormer), aka the leader of the Brotherhood without Banners. Because little has been told about House Dondarrion beyond Beric’s story, this scene gave viewers a tiny glimpse at a largely unexplored piece of GoT history.

“You Are No Son Of Mine”

After Alicent learns in Episode 8 that her son, Aegon (Tom Glynn-Carney), sexually assaulted a young girl named Dyana (Maddie Evans), she tells him, “You are no son of mine.” The particular line of dialogue is identical to one Tywin Lannister (Charles Dance) speaks to Tyrion in GoT Season 4 right before his death. Whether or not that’s any sort of foreshadowing about Alicent, she’s fared much better than the Lannister patriarch so far.

More like this
'GoT' Star Emilia Clarke Says She "Just Can't" Watch 'House Of The Dragon'
By Brad Witter
Netflix Shut Down 'Bridgerton' S3 Rumours About A “Very Dark” Storyline
By Bustle
Bill & Frank’s 'The Last Of Us' Episode Has Twitter Emotionally Wrecked
By Alyssa Lapid
Linda Ronstadt’s “Long Long Time” Plays A Pivotal Role In The Last Of Us
By Brad Witter
Get Even More From Bustle — Sign Up For The Newsletter
From hair trends to relationship advice, our daily newsletter has everything you need to sound like a person who’s on TikTok, even if you aren’t.