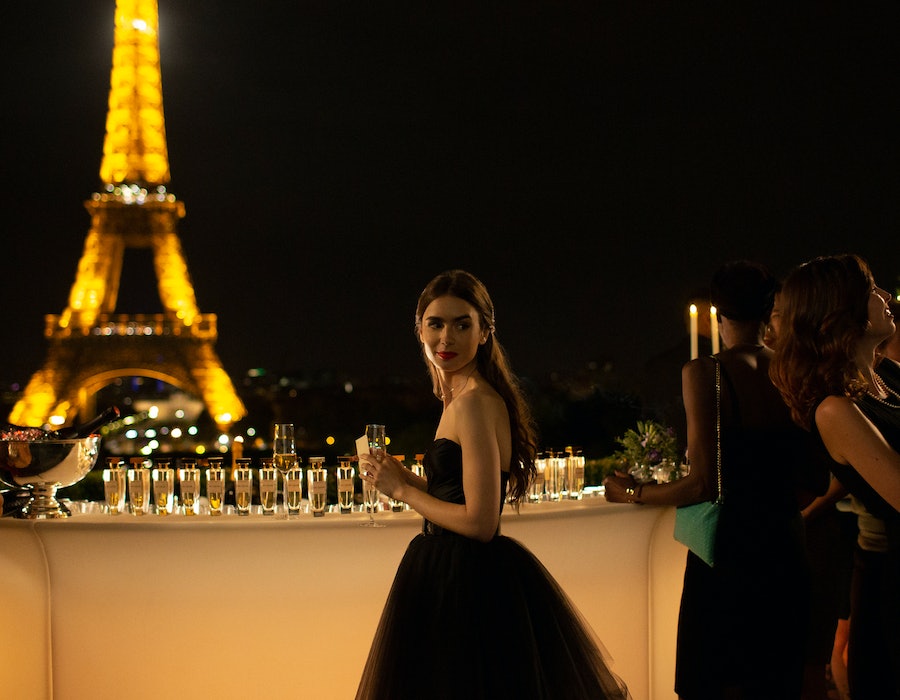 On Darren Star’s new Netflix series Emily in Paris, French clichés abound: the old European plumbing runs cold, everyone Emily meets is hot, and no one mentions the Eiffel Tower without at least a whiff of sexual innuendo. Released Friday, the show was the No. 2 most-watched Netflix program over the weekend, despite middling reviews and some scathing blowback in the French press. It’s cotton candy, really. When one episode ends and the autoplay countdown begins, you just sit there quietly hoping that nothing — neither your conscience nor your roommate nor your sense of propriety — intervenes.

The show, which tracks junior marketing exec and budding Instagram influencer Emily Cooper (Lily Collins) as she attempts to infuse every fancy French product’s ad campaign with her hokey brand of Midwestern whiz-bang, isn’t so much a tour of Paris, but of every stereotype Americans already have about the City of Light and its notoriously haughty denizens.

But let’s face it: Not all stereotypes are created equal. Emily talks more and louder than everyone else in her office combined, and when she sees a cheeseburger brought to the table at Ralph’s Paris, she salivates. Some of the ideas non-Americans have about Americans are at least kind of true.

So we asked a duo of French influencers who live the very life Emily dreams about to talk us through some of Season 1's generalizations and help us separate the gross mischaracterizations from the ones that are a little closer to the truth.

Sabina Socol (@sabinasocol), who’s lived in Paris for over a decade, watched the series over the weekend and thought of it as a funny sociological experiment. “I actually love clichés because I think they tell a story of how we're perceived elsewhere, which is super interesting,” she says. Lysa Thieffry (@lysathieffry), who’d only caught the first episode when I begged her to explain French culture to me from her flat in Le Marais, wasn’t feeling it yet. “It’s so caricatured that it makes it hard for me to watch.” Below, they weigh in on some of the show's most egregiously French tropes.

Stereotype 1: No one in Paris gets to work before 10 a.m.

Both Lysa and Sabina agree that this one is kind of true. When Lysa worked at Vogue Paris, the day started at 10, but when she worked at an ad agency — “a young start-up vibe place” — it started earlier. Sabina says she knows some offices in the fashion/media/communications world where work doesn’t start until 11. Très civilized.

Stereotype 2: In France, a cigarette is a perfectly acceptable replacement for lunch.

Again, Lysa and Sabina are on the same page — just not the same page as Emily in Paris. Lysa says everyone goes out for lunch or gets take-out. “That’s kind of an old cliché that had more resonance in the 90s and early 2000s,” Sabina tells me. Besides, she adds, people vape now.

Stereotype 3: In romantic relationships, the French are more accepting of affairs than Americans.

“I know I’m not!” says Sabina, who doesn’t think this is a tendency that can be traced back to nationality.

Lysa thinks that maybe this stereotype has some truth to it, but not for every generation. “In relationships we do not accept affairs, especially when we are young, but then, when we become real adults, I think we are aware that love is more complicated than just sex.”

Stereotype 4: It’s better for an American to speak no French at all than to speak French poorly.

“Generally, I’ve noticed the French don’t like to have to make an effort when it comes to communicating,” says Sabina, “so anything that comes across as one might piss them off.” That said, she totally disagrees and personally doesn’t mind when Americans fall all over their French vowels. “On the contrary, I think it’s very cool to be keen to learn.”

Lysa thinks it’s straight-up charming when we speak bad French but allows that at a party, for instance, French people won’t have much interest in speaking English to a stranger. “They will just chill with their friends.”

Stereotype 5: French people talk about sex a lot. Like, constantly. Even at work.

Sabina laughs at this one, before saying it’s basically true, and Lysa agrees emphatically that Americans are comparatively prudish. “We have no fence, no filter, we can speak about sex whenever,” she tells me. “I remember when I was living in New York, I would speak about sex and people would say to me, like, Dude you're crazy, stop that! I didn't get it, I was like, It's just sex. Chill.”

Emily is socially and professionally ostracized for her OTT selfie-taking and her blingy bag charms. For Sabina, this was a part of the TV series that she just didn’t get. “I think in a professional environment, we know damn well how important American social media influencers are and especially from a business perspective. I really don’t think anyone would behave like that towards a new employee or influencer.”

Lysa agrees that Parisians are “impressed” by American influencers, even if they sometimes question their fashion taste. “But business-wise I think they respect them. We are always copying Americans on technology trends.”

Lysa calls this one a “myth.” Sabina says it’s too personal to make a real judgment call, “so I’m going to say yes and no.”

Lysa is pretty blunt here (“True!”), where Sabina at least tries to soften the blow and admits to loving a good burger. “We have a critical point of view on the general way of eating in America, that’s true,” she says, graciously attempting to explain why. “I think it’s because we hear a lot of bad things about obesity, and we’re probably also the victims of certain clichés about you!”

Sabina and Lysa agree there’s some truth to this line, delivered by Emily’s new friend Mindy, a Chinese national who works as a nanny to a French family. “In the first episode they show Emily's co-workers being mean to her face. People won't be as mean as that,” Lysa tells me. “If they don't like someone, they don't even bother.” What's the French word for burn?

Sabina laughs at this one. “Yes, but they can be mean behind your back, as well.”

Stereotype 10: Parisians are snobby to anyone who isn’t from Paris, including other French people.

This stereotype arises when a semiotics professor Emily has a fling with disparages Gabriel, the hot guy next door, for not rolling his own cigarettes and, more generally, for having the terrible misfortune of being being born in Normandy. Sadly, both Lysa and Sabina think this stereotype is 100% accurate. “That one is the most true of all,” says Sabina.

Lysa agrees with her. “Real born Parisians are snobby, like Paris is La France for them.”

Update November 6, 2020: This post initially misstated Mindy's home country. It's since been corrected.