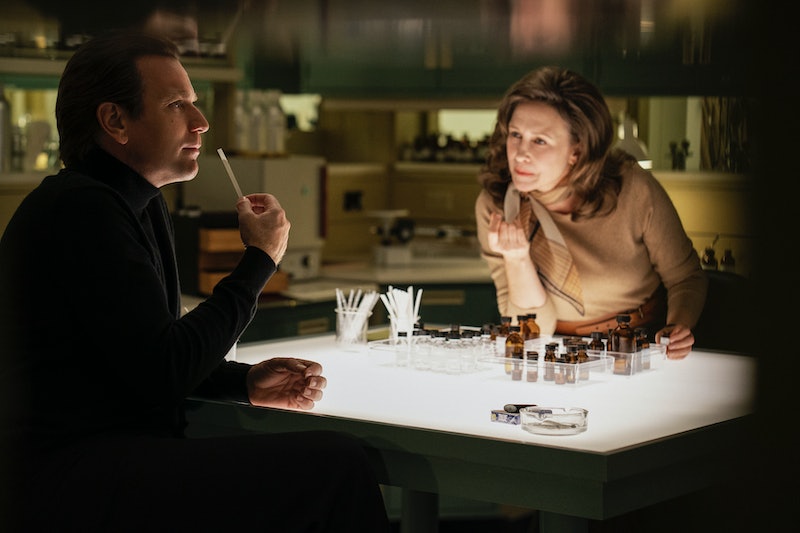 Much of episode three of the Netflix series Halston is dedicated to the designer’s debut perfume. Released in 1975, Halston’s self-titled perfume was so popular that retailers struggled to keep the product in stock. But exactly how accurate is the episode on the history and reception of the fragrance?

Who Designed The Halston Perfume Bottle?

In the show, Elsa Peretti finds a trinket at a market which she later fashions into a necklace by attaching it to a leather strap. Halston sees Peretti’s design and is inspired, and asks her to make a glass bottle for his debut perfume in the same shape as her teardrop pendant. Halston’s creators went as far as recreating the bottle used in the series by visiting a glass foundry and working with glassblowers, per the Los Angeles Times.

According to luxury lifestyle site The Outlet, Peretti did indeed find inspiration at a flea market where she found a trinket shaped like a small bud vase that she took to a silversmith in Spain. This was her first design as she entered the jewellery world, and was worn at a Giorgio di Sant’ Angelo fashion show.

And as for Peretti’s compensation for designing the bottle, Halston reportedly offered her $25,000 or a sable fur coat. This isn’t far off from what McGregor’s character offered in the series, replacing the $25,000 with his apartment (rent-free, of course).

Did The Perfume Stopper Actually Cause A Lot Of Drama?

In short: yes. In the 2019 documentary Halston, it’s revealed that executives at Max Factor were not happy at the bottle’s less than conventional design, resulting in a special stopper being made for it. They were also not too pleased about the branding only being on a ribbon, which they deed “too subliminal.” Like McGregor’s Halston, the real designer didn’t care for their opinion and wasn’t up for changing the design at all. Calling the bottle alone a “revolutionary concept” and “a work of art”, Halston was adamant that “simplicity was the key note.”

Whether Halston actually paid for Max Factor to make adapters for their factory nozzles remains unknown, but all the hassle definitely paid off in the end. The designer’s debut fragrance became one of America’s best-selling perfumes at the time, resulting in $85 million in sales within the first two years, so much so that retailers were struggling to match demand. By 1981, the perfume had reported sales of more than $33 million according to the New York Times (via the Telegraph).

Was Vera Farmiga’s Character Based On A Real Person?

Technically, yes. Actor Vera Farmiga plays a perfume artist (‘nose’) who works for International Flavors and Fragrances (IFF) in the Netflix drama. In real life, Halston’s nose also worked for IFF, but the nose behind Halston was a “tweedy Frenchman” named Bernard Chant. He also created fragrances for Ralph Lauren and Estée Lauder.

As the New Yorker describes, the smells described in the show (which include orchids and his lover’s jockstrap) are “a sort of heavy-handed metaphor for Halston’s inner life and repressed memories.” In actuality, the scent Chant created was “tangy, feral, and almost too naughty to wear to work”.

According to Fragrantica, the perfume had top notes of green leaves, mint, melon, bergamot and peach, floral middle notes including jasmine and ylang-ylang, and woody base notes like sandalwood and musk.

You can still buy it, but it’s apparently nothing like the original. At $30, it’s encased in a plastic-necked bottle rather than glass and “the caramel-coloured juice within it are only echoes of Halston’s original 1975 blockbuster fragrance,” according to the New Yorker.