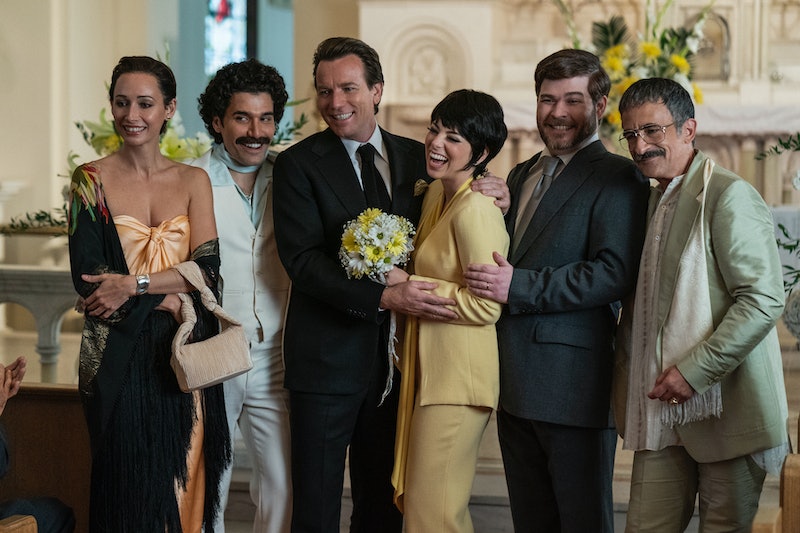 For her 1974 wedding to producer Jack Haley Jr., Liza Minnelli worked with Halston — a dear friend of hers — to create a memorable outfit: a buttercup yellow pantsuit. The ensemble is one of the many looks recreated in Halston, Netflix’s limited series about the late, trailblazing designer. True to life, the series depicts Minnelli saying her vows a butter-yellow suit.

But as the show centers on Halston, it skips over the details of Minnelli’s personal life, including her second marriage to Haley — the director of That’s Entertainment! and the Academy Awards in 1970, 1974, and 1979. (She had previously been married to Peter Allen, but that union ended in divorce in 1974). So here’s what you should know about Minnelli’s big day.

Minnelli was apparently an hour late to her own wedding at El Montecito Presbyterian Church in California; the ceremony was small and intimate, with only eight people in attendance. Haley Jr.’s father, Jack Haley, starred the Tin Man in The Wizard of Oz alongside Minnelli’s mother, Judy Garland. (Naturally, the Tin Man’s son marrying Dorothy’s daughter was big news at the time). As the Netflix series has it, the bride’s iconic yellow pantsuit was meant to conjure the yellow brick road from her mother’s most famous movie, but it’s unclear if that’s actually true. Garland and Oz were definitely at the forefront of her mind, though: per The Evening News, she had planned to wear a black pantsuit and red slipper replicas to her reception the following night, and she’d invited several of her mother’s friends to attend.

Sadly, Minnelli and Haley’s marriage only lasted a few years. They divorced in April 1979 (perhaps not surprisingly), and The Guardian has since reported that they were “friends rather than lovers.” According to that same article, Minnelli was well-known for having affairs; as Andy Warhol noted in his diary in 1978, “Her life's very complicated now. Like she was walking down the street with Jack Haley, her husband, and they'd run into Martin Scorsese, who she's now having an affair with, and Marty attacked her for also having an affair with [Mikhail] Baryshnikov ... this is going on with her husband standing there!”

Still, when Haley Jr. passed away in in 2001, Minnelli said to Variety, “Jack was the first one to remind the general public of our heritage. America’s royalty is our entertainers, who have given so much to the world ... I fell in love with him the first time I met him, and I have loved him with all of my heart ever since.”

Minnelli also invited Halston to her third marriage to sculptor Mark Gero in December of 1979. Minnelli married Gero at St. Bartholomew’s Church in New York (and appeared to opt for white that time).