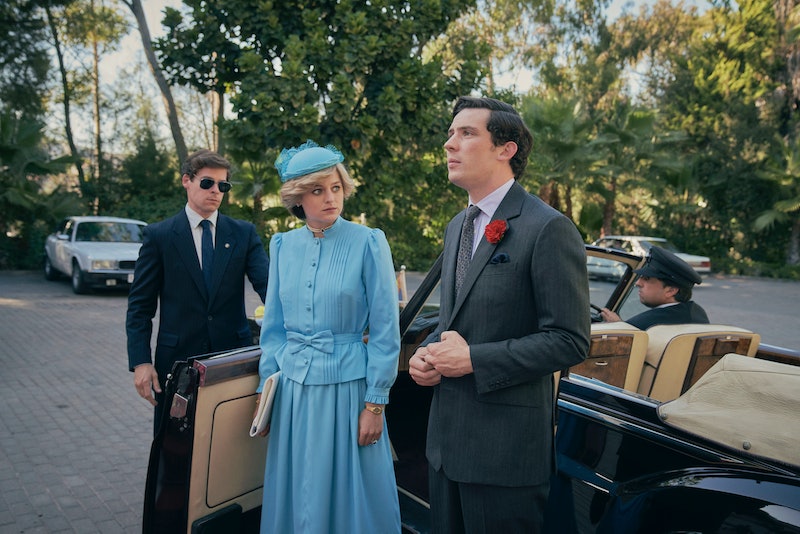 There is maybe no more iconic photo of Prince Charles and Princess Diana than on their wedding day, waving and seemingly in love after a whirlwind romance. But The Crown Season 4 shows their relationship in a different light: Diana paralleled with a wounded stag, alone and limping around the grounds of the royal family’s Balmoral Castle.

Though their love was long painted like a fairytale come true, the reality was much grimmer. Between the time the two met in 1977, got married, and had children, their relationship was marred by conflict and numerous affairs. The Crown's fourth season depicts this in agonizing detail, albeit with a few changes. Let’s break it down.

Perhaps the strangest part of Charles and Diana’s story is fairly accurately represented in The Crown: he was dating her sister Sarah when they first crossed paths in November 1977. Diana was just 16 at the time. “What a very jolly, and amusing, and attractive 16-year-old she was,” Charles later said in an interview about their initial meeting. (There are no reports that she was dressed like a nymph at the time, as she is in the show, though it does help to illustrate how much younger she was).

Both Diana and Charles acknowledged that it never crossed their minds that they’d be engaged three years later, and it wasn’t until Diana was 18 that their love story began in earnest. Though they actually reconnected at a house party and not at the track following a dressage match, their initial connection was pretty similar. As Diana said in the 1992 book Diana: Her True Story In Her Own Words:

“We were talking about Mountbatten and his girlfriend and I said, 'You must be so lonely … watching you walking up the aisle with Mountbatten’s coffin in front, ghastly, you need someone beside you.' Whereupon he leapt upon me and started kissing me and I thought, urgh, this is not what people do.”

On the two’s first date (to the opera, as seen at the beginning of Episode 2, “The Balmoral Test”), Diana’s grandmother chaperoned.

Diana did visit the Balmoral estate for their third date, with all its quirks, customs, and scrutinies. But something The Crown leaves out of the excursion (and the rest of their courtship) is just how much the two were hounded by paparazzi — in particular Diana, who wasn't accustomed to public scrutiny like Charles. While photojournalists didn't get a shot of Diana’s face while she was visiting Balmoral, within days her identity as Prince Charles’ girlfriend was revealed and she was swarmed by paparazzi at her work, home, and almost anywhere else she went.

If the couple’s courtship on The Crown seems rushed, that’s because it was. Diana and Charles famously met just a handful of times — approximately 13 — before they got married. Diana later said that during that time, she would sometimes go a few weeks without hearing from Charles.

Charles also did really respond “Whatever in love means” during the 1981 interview announcing their engagement, which Diana said “traumatized” her. "We had this ghastly interview the day we announced our engagement,” she said in Diana: Her True Story In Her Own Words. “And this ridiculous [reporter] said, ‘Are you in love?’ I thought, what a thick question. So I said, ‘Yes, of course, we are,’ and Charles turned round and said, ‘Whatever love means.’ And that threw me completely.”

It was during their five-month engagement that Diana developed her eating disorder, which she continued to battle throughout the rest of her life. She went public about her bulimia in a 1995 interview, calling it a “symptom of what was going on in her marriage” where she was “crying out for help, but giving the wrong signals.”

Still, despite having reservations so severe she considered calling off the wedding, Diana ultimately married Charles on July 29, 1981. The “wedding of the century” is only shown briefly in The Crown, but it does give us 15 seconds to marvel at one of the most iconic wedding dresses in modern history.

Charles and Diana’s marriage was far from a fairy tale. As Princess Anne notes in one of the episodes, their 13-year age gap meant that they had very different interests. Prince Charles really did bring in tutors to try to connect with Diana on topics like Shakespeare and poetry, including an old instructor of his from Eton College. Diana also suffered from pretty severe depression, especially around her pregnancies. And as The Crown shows, Charles was surprised and very jealous of the adoration Diana received on their tour of Australia. “He took it out on me,” she detailed in Diana. “He was jealous; I understood the jealousy but I couldn’t explain that I didn’t ask for [the attention].”

That was just one of many things weighing on the marriage, even as Diana and Charles seemed publicly happy: they dazzled on the dance floor in Australia, and she delivered a surprise performance for Charles during a 1985 gala.

Prince Charles and Princess Diana were famously not alone in their marriage. Charles previously dated Camilla Parker Bowles, and their relationship continued throughout both of their first marriages.

Though Camilla and Prince Charles’ affair was on and off over the years, it almost immediately reared its head in Diana and Charles’ relationship. Shortly after they got engaged, he left for a five-week tour of Australia and arranged for her to have lunch with Camilla, as The Crown portrays. Just before their wedding, Diana also did find a bracelet Charles had engraved with his and Camilla’s nicknames.

By 1986, Camilla and Charles were decidedly back on, despite both being married with children. As The Crown Season 4 shows, Diana had at least an inkling of the affair despite Charles instructing staff to lie to her, and she disliked coming to the Prince’s Highgrove estate because Camilla lived nearby.

In 1989, at a party for Camilla’s sister, Diana confronted Camilla about the relationship. “I said to Camilla, ‘I’m sorry I’m in the way, I obviously am in the way and it must be hell for both of you, but I do know what is going on. Don’t treat me like an idiot,’” she revealed in Diana: Her True Story in Her Own Words. “[Charles] told a lot of people the reason why the marriage was so wobbly was because I was being sick the whole time. They never questioned what [the affair] was doing to me.”

By 1990 — where The Crown Season 4 leaves off — both Diana and Charles were having affairs; Diana with one of her bodyguards, a cavalry officer, and a friend. Two years later, they separated, and by 1996 they were officially divorced.