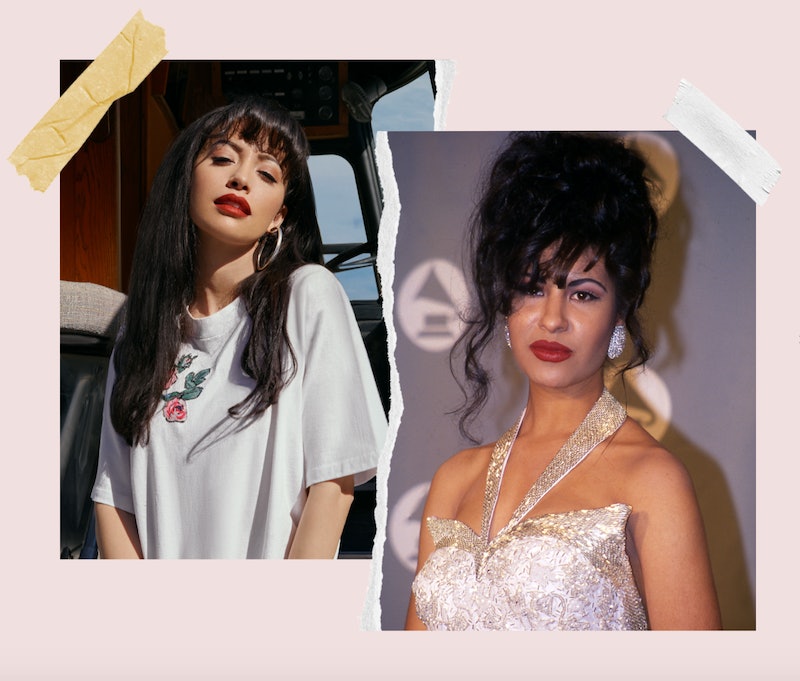 It’s not easy to capture Selena Quintanilla — her warmth, her talent, those clothes. But Netflix’s new biographical drama Selena: The Series does its best to embody the life and legacy of the beloved late pop star.

By the time she was tragically murdered in 1995 — just before her 24th birthday — Selena had conquered the Latin charts, captured the hearts of millions, and was on her way to a crossover album. Over two decades later, that legacy still looms large: Jennifer Lopez famously played her in a biopic shortly after her death; she’s inspired artists like Cardi B, Solange, Beyoncé, Big Sean, Daddy Yankee, and Kacey Musgraves; and People launched its Spanish iteration of the magazine because her tribute issue sold so well.

Selena is ultimately very faithful to Selena’s real life story. From an early age, her family recognized her prodigious talent: “Her timing, her pitch were perfect,” Selena's father Abraham later said. “I could see it from day one.” Coming from a musical background of his own, Abraham encouraged his kids to focus on music, forming a group with Selena’s brother A.B. on bass and her sister Suzette on drums called Selena y Los Dinos. They started playing at county fairs and their family restaurant, eventually moving on to weddings and any other event they could find. When the restaurant went under in 1981, they committed fully to music. “We had no alternative,” Selena recalled in 1992, per People.

A major point of friction in Selena is how controlling Abraham was over his family, which is true to life. The real Abraham Quintanilla was a Jehovah’s Witness who (at first) objected to Selena’s midriff-baring costumes. He and his wife Marcella always shared a hotel room with her and Suzette when they were on the road to keep a close eye on them.

Though the band initially played English covers, they later pivoted to Tejano music against the wishes of Selena and her siblings — and in spite of Selena’s limited Spanish skills. She learned to sing all the tracks phonetically.

In 1985, the band signed their first record deal with Freddie Records and released their self-titled debut Selena y Los Dinos, the first of a run of increasingly popular albums with the independent label. From there, they amassed both popularity and Tejano Music Awards before eventually signing with EMI Latin. Though Selena was signed as a solo star, she brought the Dinos with her. As in the show, the family struggled with the adjustment — most notably with the album cover of their first EMI album Selena, which Abraham, in particular, strongly disliked.

As Selena’s fame grew, she took the opportunity to capitalize on her love of fashion. She had aspirations to do fashion design and would often design costumes for the band — sometimes against their own taste, as Selena showed. “Selena would draw the designs and choose the fabric, then send everything off to a seamstress who had all of our measurements on hand,” Chris Pérez, the guitarist in the band and eventually Selena’s husband, wrote in his book To Selena, With Love. “Selena’s tastes were flamboyant, to say the least. She liked to see a lot of glitter and shine. I’d be handed a pair of black-and-white cowhide pants or a shiny purple satin suit with gold seams sewn down the front of the legs, and I’d say, ‘Oh, man. Do I really have to wear this?’”

In fact, it’s Selena’s romance with Pérez in Selena that most deviates from her real life. Most notably, Abraham was actually even more upset when he found out about the two’s relationship than he is in the show. He had already forbidden them to date, and one night just “started yelling,” according to Pérez’s book. In Selena, he pulls the tour bus over at a gas station and gives Chris money to leave, but in real life it was on the side of a highway. He called Perez a “cancer in my family” and left him to walk back to the nearest small town.

It’s there that Part 1 of Selena leaves off, leaving the next stage of Selena’s career and romance — and the final chapter of her life — for Part 2.

More like this
Watch The Thrilling Teaser Trailer Of 'Shadow And Bone' Season 2
By Gretchen Smail, Jack Irvin and Sophie McEvoy
Mike Flanagan Teases 'The Midnight Club' In This Exclusive, Creepy Clip
By Grace Wehniainen
'Firefly Lane' Season 2 Will Be The Show's Last — But There's A Twist
By K.W. Colyard and Grace Wehniainen
The 'Heartstopper' Cast Were Spotted Filming In A Major City
By Nola Ojomu and Sam Ramsden
Get Even More From Bustle — Sign Up For The Newsletter