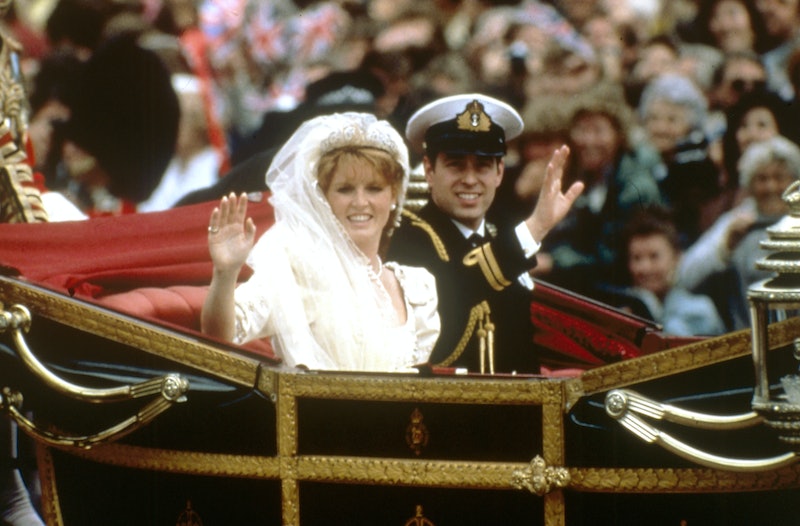 Members of the royal family have made their feelings clear about their depiction in Netflix's hit series The Crown and not all are pleased — especially when it comes to the most recent series, which sees a controversial portrayal of Prince Charles and Princess Diana's marriage during the 1980s. However, the Duchess of York, Sarah Ferguson has praised The Crown for its portrayal of her royal wedding, and apparently, she's impressed overall.

“I thought it was filmed beautifully. The cinematography was excellent," she said to US Weekly, while promoting her new book, Her Heart For A Compass. “I loved the way they put my wedding in as well.”

Ferguson was married to Prince Andrew in a grand royal wedding at Westminster Abbey in 1986. In the show – which is known for its amazingly accurate casting choices – Jessica Aquilina plays Ferguson, while Tom Byrne portrays Prince Andrew.

The royal couple, who are parents to Princess Beatrice and Princess Eugenie, eventually divorced ten years later but have remained good friends. Together, they have weathered the storm of Prince Andrew's controversial connection to convicted sex offender Jeffery Epstein.

And Ferguson is not the only royal who has spoken publicly about The Crown.

Princess Diana's brother, Earl Spencer, has been vocal about his fears that viewers will forget the show "is fiction." In an interview with Love Your Weekend with Alan Titchmarsh, he explained:

"The worry for me is that people see a programme like that and they forget that it is fiction," he stated. "They assume, especially foreigners, I find Americans tell me they have watched The Crown as if they have taken a history lesson. Well, they haven't."

Spencer has also pushed for the show to have a disclaimer at the beginning of each episode.

"I think it would help The Crown an enormous amount if, at the beginning of each episode, it stated that: 'This isn't true but it is based around some real events'," he said, per BBC News.

The Crown's creator Peter Morgan has always defended the show as "an act of creative imagination."

Netflix has stated that it has "no plans" to add a disclaimer to The Crown episodes in the future.

More like this
Meghan & Harry Respond To Jeremy Clarkson’s "Apology" Over *That* Column
By Sophie McEvoy
5 Striking Parallels Between Princess Diana & Prince Harry’s TV Interviews
By Catharina Cheung
Kate Middleton Makes Rare Comment About Talking Therapy
By Sam Ramsden
Everything To Know About The 'Daisy Jones & The Six' TV Series
By Maxine Harrison and Brad Witter
Get The Very Best Of Bustle/UK
Sign up for Bustle UK's twice-weekly newsletter, featuring the latest must-watch TV, moving personal stories, and expert advice on the hottest viral buys.