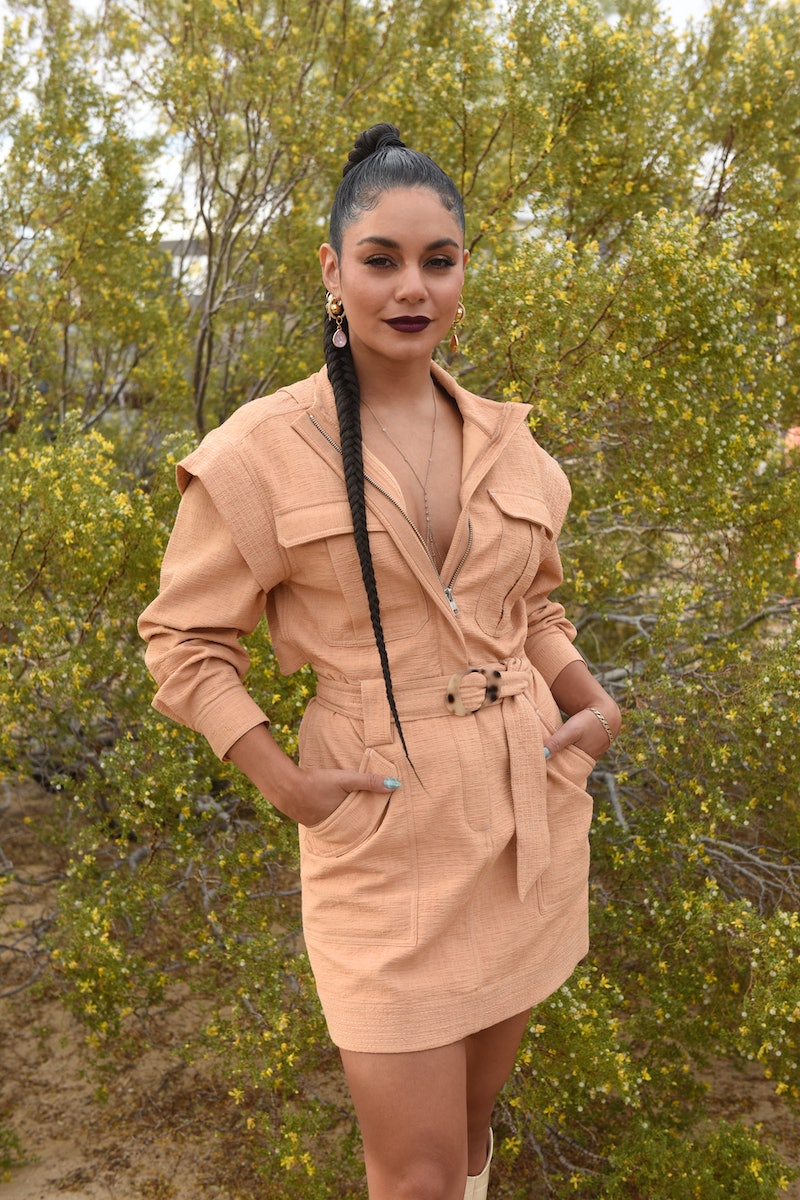 Having gone Instagram official with her relationship in February, Vanessa Hudgens recounted how she met boyfriend Cole Tucker and pursued him during a Friday, May 7 interview on The Drew Barrymore Show. Sharing she “still cannot get over the fact that it happened,” the Princess Switch actor explained she had briefly joined a dating app after finding herself single during quarantine. She ended up hating herself for that decision and “kind of just gave up for a minute,” but then went on to met Tucker in an unlikely way.

A friend had added her to a group text where members of a weekly Zoom meditation group — including the Pittsburgh Pirates outfielder, along with Joe Jonas and Wilmer Valderrama — were sending GIFs of themselves. “There’s like a GIF in the group chat of a baseball player and he’s sliding onto a base and I thought it was a joke,” Hudgens explained. “So I just responded, ‘Hot.’ And then I get on the Zoom and I’m like, ‘Who is that?’ And I found him and we started talking, and yeah, it’s wild that, you know, we found each other over Zoom.”

After Barrymore admitted she still still has “that stigma that the man is supposed to do that initial step,” Hudgens insisted she had no issue with making the first move: “I’m such a go-getter. I’m like, if I want something or someone, I’m going after ’em. I fully just slid into his DMs and was like, ‘Hey, it was nice to meet you.’ So I think there is no shame in making the first move. If you want it, why wait for someone else to give you what you want?”

Rumors that Hudgens and Tucker were dating began in November after the pair were spotted outside a Los Angeles restaurant, just days after the Tick, Tick... Boom! star teased a “date night” on Instagram. By January, E! News reported they were in an exclusive relationship and had rung in the New Year together, and on Valentine’s Day, they went Instagram official. Since then, they’ve made no secret of their relationship, having shared several romantic Instagram photos.

During the sit-down, Barrymore also fondly recalled attending a 2008 Kings of Leon concert in Los Angeles with Hudgens and her then-boyfriend, Zac Efron. “I was literally your and Zac’s third wheel,” Barrymore joked. “It was so fun and you guys were so cute and cozy, and I just had the best time.” Hudgens, for her part, added that she still tells the story to this day: “That was such a wild time. I remember being there and I was like, ‘What’s happening? This is so amazing.’ You were so sweet.”

Hudgens previously opened up about her relationship with Tucker to Entertainment Tonight in April. “He’s just kind of perfect for me. I am [happy]. I really am,” she shared. “I think that it’s also so important to stay grateful for everything that you have in life. I’ve been making that a priority, and I feel like it’s just been making magic happen all the more.”

But who knows if she would have found magic with Tucker had she not taken the initiative to go after it herself?

More like this
Who Is Pete Davidson Dating? He & Chase Sui Wonders Got Caught Kissing
By Jake Viswanath
John Corbett's Wife Bo Derek Once Revealed If She's Team Aidan Or Team Big
By Alyssa Lapid
Selena Gomez Confirms She's Single Amid Drew Taggart Dating Rumors
By Martha Sorren, Jake Viswanath and Jack Irvin
Jennifer Lopez Calls Moving In With Ben Affleck's Family An “Emotional Transition”
By Alyssa Lapid
Get Even More From Bustle — Sign Up For The Newsletter
From hair trends to relationship advice, our daily newsletter has everything you need to sound like a person who’s on TikTok, even if you aren’t.