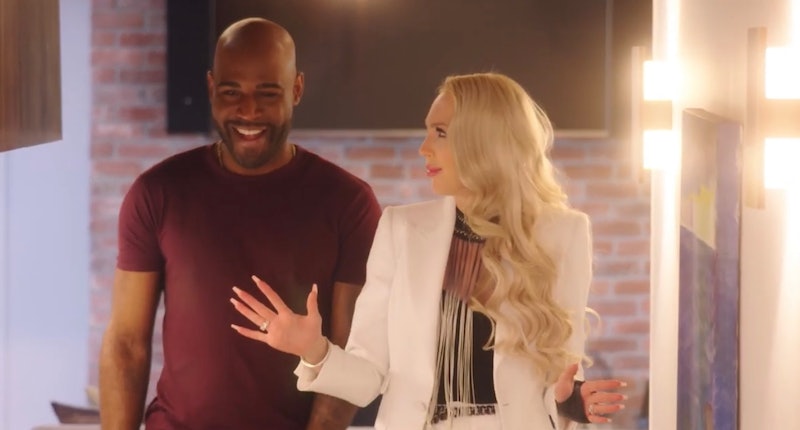 Viewers were gifted with a surprise Netflix crossover when Christine Quinn took Queer Eye's Karamo Brown house hunting in the Selling Sunset Season 3 finale. As for how Christine and Karamo know each other, the Oppenheim Group agent briefly mentioned in the episode that he's a friend and client. They also seemed to share plenty in common as the duo compared notes about their "epic" weddings, as they toured a $2.9 million Los Angeles home. "It makes sense, the two of us doing over-the-top weddings," Karamo joked to Christine, who added a "so extra" descriptor.

As it turns out, Christine says Karamo is the one who reportedly campaigned for the Selling Sunset cameo. "When he reached out to me I couldn't believe it!" she told Cosmopolitan UK in April. "He wrote a really sweet post on Instagram. He didn't know me, he just watched the show, and I watched Queer Eye and he was my No. 1. It's so crazy."

Fast-forward to Christine now calling Karamo one of her best friends, and him enlisting her help to find him and fiancé Ian Jordan a new house. "I had lunch with him the other day, and he said he would love to be part of the show, and go through that process with me," she added to Cosmo UK of her "amazing, really sweet" friend in the spring.

Despite their instant connection, however, Christine almost forgot that Karamo would be on Selling Sunset's third season. "I was on so many antibiotics when we were filming. I really don't remember," she admitted on a recent Reality Tea podcast appearance. That confusion aside, Christine still walked away with more than a possible five-figure commission, in the end: she even got a mini Queer Eye-style therapy session from the pro himself.