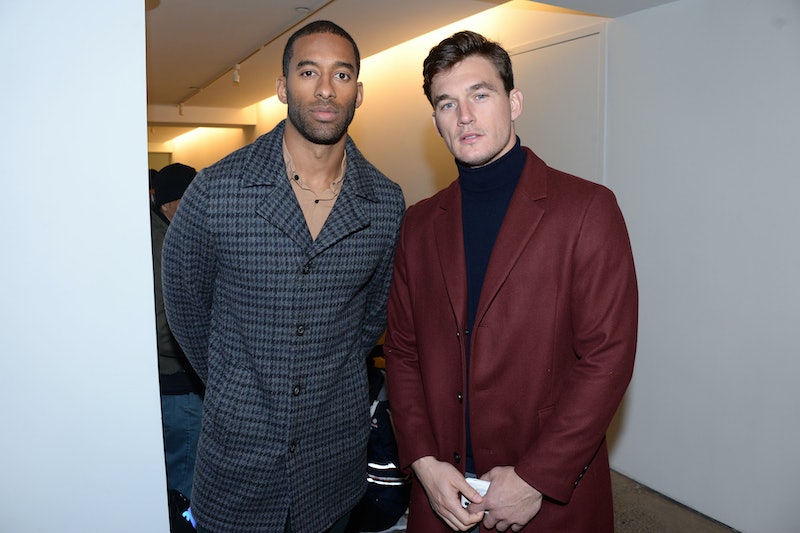 Matt James might be new to The Bachelor, but he's been connected to the franchise for longer than you might think. The Season 25 lead is best friends, roommates, and business partners with fan-favorite Tyler Cameron, who was the runner-up on Hannah Brown's season of The Bachelorette. After Cameron's exit in the series finale, fans flocked to his social media to keep tabs on his life post-show. Turns out, Matt's been a huge part of the 27-year-old model's life both before and after he got his heart broken by Alabama Hannah on national television.

According to People, Tyler and Matt first met playing football on their college team at Wake Forest University. They've remained close ever since, and in Oct. 2019, they decided to move to New York City together and become roommates. Per Us Weekly, things changed for the duo when the coronavirus pandemic flared up in March 2020, and Matt accompanied Cameron to his hometown of Jupiter, Florida.

Interestingly, it was in quarantine that Matt became somewhat of an honorary member of Bachelor Nation. The content he created with Tyler, Hannah, and their other friends (who collectively called themselves the "Quarantine Crew") on Instagram and TikTok consistently went viral. And with Matt being originally cast as a contestant on Clare Crawley's season of The Bachelorette, fan interest in the 29-year-old ABC Food Tours founder reached a fever pitch. "I can't wait to see him on the show," Tyler told People at the time.

Matt was later pulled from Clare's season and cast as The Bachelor instead, despite never appearing on the hit reality show, which Tyler pretty much predicted all along. In a 2019 interview with People, he pointed to his best friend when he was asked who should lead the franchise next. Tyler also revealed that his late mother Andrea — who reportedly died of a brain aneurysm in February 2020 — nominated Matt for the show.

In a June 2020 interview with ET Online, Matt opened up about Tyler's mom's nomination and why she wanted him to be on the show so badly. "She would be happy to know that I followed through with it," he said. "I think she saw everything that it did for Tyler and the way that he had changed as a man, and me being his roommate and being one of her sons, I think that she wanted something like that for myself."

Outside of the series, Matt and Tyler manage ABC Food Tours, a non-profit that takes kids from underserved neighborhoods to restaurants in their local communities and teaches them healthy living habits. In Oct. 2019, Tyler told GQ that they came up with the idea based on a mentorship program they both participated in at school. "When me and Matt were in college, we ran this program called Eat with the Deacs," he said. "... It was just us talking with kids about whatever they wanted to talk about: what was going on at school, what was going on in their sports lives, their favorite rappers. Food just broke down barriers."

Matt James' season of The Bachelor premieres on Monday, Jan. 4 at 8 p.m. EST on ABC.