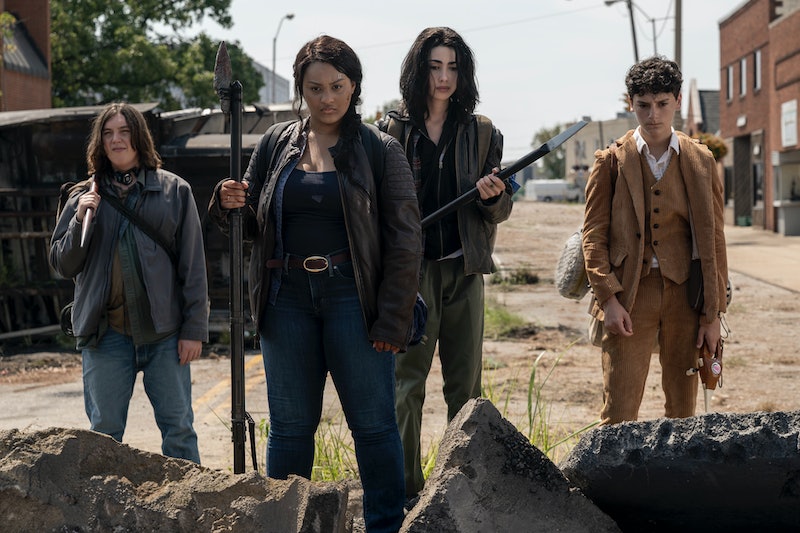 AMC's new show The Walking Dead: World Beyond doesn't really connect to The Walking Dead, aside from the fact that they both unfold amid a zombie apocalypse. The spinoff revolves around entirely new characters, and is overall "pretty independent" from the original series, The Walking Dead universe's chief content officer Scott Gimple told IGN. However, the shows do share certain details and histories, and World Beyond will help to finally fill in some blanks left by Rick Grimes' (Andrew Lincoln) departure in The Walking Dead Season 9.

During the show's 2020 virtual Comic-Con panel in July, Gimple explained that World Beyond is "a peek into the mythology" of the upcoming movie trilogy centered around Rick. Most notably, AMC's blog revealed that World Beyond will finally reveal where that helicopter that saved Rick is from. Painted with the image of three interconnected rings, the chopper belongs to a colony known as the Civic Republic Military (CRM). They're a formidable community led by Elizabeth (Julia Ormond) that has technology and an impressive geographic reach — from Texas to Virginia to Nebraska — far beyond anything seen in The Walking Dead.

Though the CRM does seemingly save Rick, Althea discovers in Fear the Walking Dead that it's a pretty shady organization. “If you see someone wearing this jacket, you should be afraid," a CRM soldier named Isabelle explains to Althea. "We are a force who are not living for ourselves or for now. You have your stories, already making every day the past. We have the future.” Though Isabelle doesn't tell Althea the CRM's location, she does say that the community is focused on rebuilding society for the future...by any means necessary.

If, at this point, you're getting Hunger Games vibes, that's very much intentional. Gimple explained to Decider that World Beyond focuses on a group of Gen Zers who grew up in the CRM, so it has "a younger point of view" that makes it "tonally very different" from The Walking Dead. "There’s an innocence about it — and I don’t just mean how old the characters are," he said. "It’s people who grew up in a place of safety ... [they] have been living relatively first world lives. They have an awareness of what walkers are, and the dangers are, but they just don’t deal with them on a daily basis."

The journey that Iris (Aliyah Royale), Hope (Alexa Mansour), Silas (Hal Cumpston), and Elton (Nicolas Cantu) go on, then, is about having to "face growing up," Gimple continued. It appears they make a choice to leave the CRM, a "heroic" move that's part of a "very personal reason, a quest of sorts."

Ultimately, World Beyond is only meant to be two seasons, but it does feel relevant to younger audiences. The Walking Dead is a pretty dismal show about the end of the world, but World Beyond pushes back on that cynicism, asserting there has to be a world after the apocalypse for the next generation.