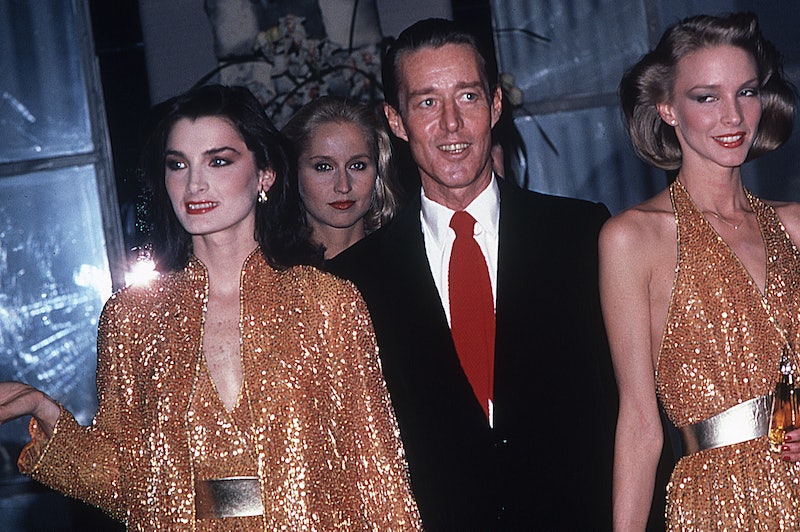 Halston’s niece (and director of the Halston Archives) Lesley Frowick has told Variety that the designer’s family is “collectively disappointed” by the series, and that the creators “never contacted” his family or his Archives. But while Halston may take liberties, the show is adapted from Steven Gaines’ biography Simply Halston, and is based on true events.

The mononymous fashion designer was born Roy Halston Frowick in Des Moines, Iowa to working class parents, but his talents propelled him to worldwide fame in the ’70s. He was self-made in every sense of the word — he even adopted a new style of speaking to better fit with his image. To prepare, McGregor watched Halston’s unedited interviews, trying to get a peek behind the curtain. “When the cameras were rolling when he’s being interviewed, he was always on,” the actor tells Bustle. “And then you’re looking to see if there’s a difference when he’s like behind the scenes or speaking with his friends. And that’s what we tried to do, [director Dan Daniel Minahan] and I, with you know, the scenes with his lovers, or the scenes with Liza, you know, where maybe you see behind that sort of facade.”

But Halston didn’t just create an image for himself — he had a vision for how everyone should dress. Hyperaware of how women’s lives were changing at the time, many of his most successful designs offered ease and simplicity: fluid caftan-style gowns, and ultrasuede shirt-dresses — the latter of which pioneered the “day-to-night” ensemble for working women. He believed his dresses should move and flow, like a “dancing partner” for the wearer, and it took a lot of work to make his designs look so effortless.

Halston put his stamp on just about everything. After getting his start as an upscale milliner, he would design gowns, shoes, perfumes, handbags, and eventually a myriad of ready-to-wear garments in a then-unheard-of partnership with JCPenny department stores. He never lacked ambition, but this collaboration, along with the acquisition of his label by Esmark, proved to be the beginning of the end for Halston.

Below is a quick summary of Halston’s unparalleled career, including his rise to fame and how it all came crashing down.

First Lady Jackie Kennedy put Halston on the map when she wore his pillbox hat to John F. Kennedy’s inauguration in 1961. She made a statement by pairing it with a matching wool jacket (designed by Oleg Cassini) when most women of her status wore furs. In an interview Halston gave about the hat’s popularity, he said: “It was a rather windy day, and she put her hand on the hat and it ended up to have a dent in it. So during all the ceremonies it had a dent in the hat, so everybody who copied it put a dent in it …”

A decade later, the Battle of Versailles brought him to another level.

The so-called Battle of Versailles was a 1973 fashion show-slash-fundraiser aimed to finance the restoration of the Palace of Versailles. It pitted five French designers against five American designers, one of whom was Halston. At the time, no one anticipated the impact the Americans would have on the future of fashion, and Halston helped the world take notice. His designs were fun, exciting, and effortless, yet still incredibly chic. He also helped out the American faction by inviting his good friend Liza Minelli to perform during his runway show. The results were a smash, and Halston soon became the face of American fashion.

That same year, he sold his line — and his name — to Norton Simon Inc.

The conglomerate acquired Halston’s company and his creative services in 1973. At the time, it was an unheard of deal — but later, it would come back to haunt him. “He sold his name, baby,” Joe Eula says in an excerpt from Simply Halston, run in Vanity Fair. “It was The Devil and Daniel Webster.”

Halston’s gowns were a masterclass in simplicity.

Halston designed gowns with two things in mind: the fabric and the human body. Oftentimes his dresses were made of a single piece of chiffon or silk fabric, draped elegantly over the body. He avoided unnecessary finishings, like buttons and zippers, that would alter how the fabric fell. The intricacies were in the dress patterns, which looked peculiar and complicated — that is, until the dress was finished. Icons like Cher, Elizabeth Taylor, Martha Graham, Bianca Jagger, and more wore his gowns everywhere, from the red carpet to Studio 54.

He regularly travelled with a posse, famously nicknamed “The Halstonettes.”

André Leon Talley famously coined the term “Halstonettes” when referring to the often large quantity of people always at Halston’s side. Many were his models or close friends, like Liza Minelli and Pat Cleveland, as well as Anjelica Huston, Karen Bjornston, and Pat Ast. He was always with them — in editorials, advertisements, dinners, and even on an historic trip to China. It’s been reported that he sometimes travelled with 20 members of his crew at a time, charging the bill to Norton Simon Inc., his then investor.

Halston was one of the first top designers to diversify the runway.

The fashion industry has always had a diversity problem, and the ’70s were not-so-shockingly more whitewashed than they are today. Halston regularly used BIPOC models in his runway shows, and launched the career of several Black supermodels, including Pat Cleveland and Iman. At the Battle of Versailles, he used 10 Black models in his runway show: Cleveland, Amina Warsuma, Charlene Dash, Bethann Hardison, Billie Blair, Ramona Saunders, Alva Chinn, Barbara Jackson, Jennifer Brice and Norma Jean Darden.

Bergdorf Goodman dropped Halston’s line after his partnership with JCPenny was announced.

In 1983, Halson signed a $1 billion, six-year deal with JCPenney (and reported it himself, on live television), which was unheard of at the time. Halston’s vision was to “dress every woman in America,” no matter where they shopped; his line Halston III, available exclusively available at the American retailer, allowed him to do just that. This move was met with disdain by the high-fashion world, and the tide began to turn on the then-golden Halston. Bergdorf Goodman, the high-end department store that had maintained a two decade-long creative partnership with Halston, immediately dropped his line upon hearing the news.

Esmark Inc.’s acquisition of Halston forced him out of his own line.

Shortly after the infamous JCPenney deal, Halston was bought out by Esmark Inc. He would now be under the watchful eye of Carl Epstein, who many credit for bringing about the brand’s downfall. Forced to decrease his monumental (and somewhat excessive) budget, Halston quickly began butting heads with Epstein. By 1984, the designer was all but banished from his own company. Epstein proceeded to destroy archival footage, like Halston’s runway shows, and sold many iconic garments that would otherwise be preserved today. As he’d sold the trademark to his name

Halston eventually tried to buy it back, but the brand itself was now seen as tarnished goods by the public. He continued designing for Minelli and a few close friends, but ultimately kept a low profile until his untimely death in 1990. He may have never seen his label bounce back, but his contribution to American fashion changed the landscape forever.

More like this
Blood Lust Meets Real Lust In Netflix’s Lesbian Vampire Show ‘First Kill’
By Gretchen Smail
Who Could Die In The Stranger Things Season 4 Finale?
By Kadin Burnett
Julie Andrews Revealed A Surprising Behind-The-Scenes 'Bridgerton' Detail
By Grace Wehniainen
Who Is 'Umbrella Academy' Star Elliot Page Dating After His Divorce?
By Jake Viswanath
Get Even More From Bustle — Sign Up For The Newsletter