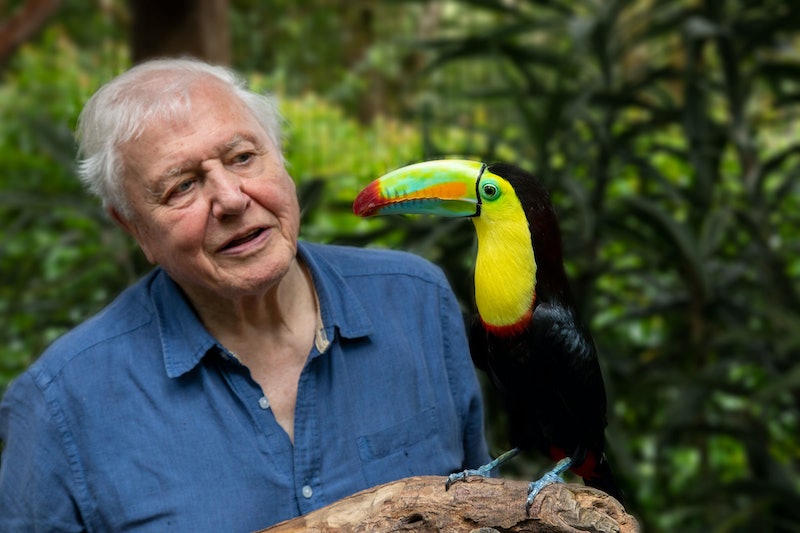 Sir David Attenborough's latest documentary is finally here and arguably looks at the animal kingdom in an entirely new way. BBC's Life in Colour aims to capture life through the eyes of other species and explores how colour plays a significant role in their survival. The three-part series, co-produced by streaming giant Netflix, has employed some seriously wild technology to make it happen, but how was Life in Colour filmed?

According to the Mirror, production on the new series saw Attenborough travel to the rainforests of Costa Rica in 2019, with further filming taking place in locations such as Darwin, Australia, the Great Barrier Reef, and New Guinea. Like most other recent productions, its production was disrupted by the coronavirus pandemic. Attenborough managed to complete the majority of his on-location shoots beforehand, but completed the show's narrations from his London home, BBC Science Focus magazine reports.

As mentioned, the series was filmed using modern camera technology — some of which was designed specifically for the new series. Per iNews, Life in Colour aims to display how UV and polarised lights (both of which sit beyond the spectrum of human vision) are used by animals to communicate, attract mates, and survive in the wild. Using specially developed cameras and technology, the Attenborough-voiced series hopes to bring "animal vision" to life by overlaying UV and polarised visuals onto "human vision" footage.

At the conclusion of each episode, viewers will be treated to a special behind-the-scenes segment that reveals how the show's dazzling sequences came to life.

Mantis shrimp, hummingbirds, reef fish, and mandrill monkeys are just some of the magnificent creatures to feature in the BBC and Netflix co-production. Per iNews, the concept of Life in Colour was originally pitched by Attenborough in the 1950s but was shelved due to a lack of technology. (Colour television wasn't even a thing then.)

"New discoveries are giving us fresh insights into the lives of these animals and new cameras are allowing us to see into a world of colour as never before," Attenborough said of the new series, adding: "We’re only just beginning to understand the many ways in which animals use colour, particularly those colours we can’t even see. For us colour in the natural world is a source of beauty, of wonder, but for animals, it’s a tool for survival."