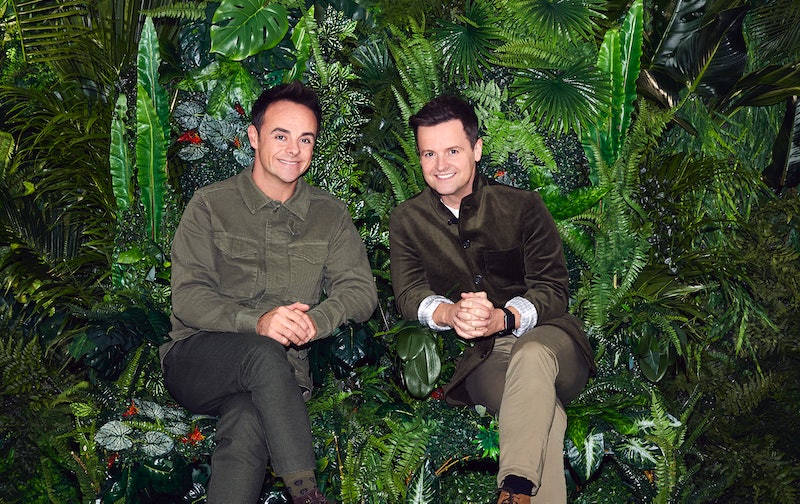 The drama might be heating up in camp, but you can always count on Ant and Dec to fan the flames. The iconic duo give viewers a little respite from the trivial arguments and other issues going on between the celebs, especially when it comes to their hilarious antics on and off-air. As rewarding as their presenting is on the show, I can’t help but wonder how much are Ant and Dec paid on I’m A Celeb?

As an ITV spokesperson previously told Bustle, the broadcaster does not disclose how much their stars are paid. But according to Heat World, the presenting duo are paid £2.5 million each for their hosting duties. Granted, this alleged amount is from four years ago but it does sound about right when you consider their net worth.

In 2018, Ant and Dec were reportedly paid £12,175 per day last year according to Cosmopolitan. These figures are allegedly from end of year tax reports from the pair’s production company, Hurley Promotions Ltd. On top of that, “they both got equal sums of £85,000 a week, with profits hitting the £4.4 million mark.”

Although in 2017, they were reportedly earning a whopping £79,000 a day according to The Sun (via OK! magazine). In both situations, that’s a lot of cash to be earning daily. Whenever they stop presenting I’m A Celeb (which tbh I hope is never), I’ll totally be available to fill that position. Totally.

But to be fair, they do work hard for it. They’re hosting I’m A Celeb, Britain’s Got Talent, and Saturday Night Takeaway throughout the year, and they both have their own production companies, according to Metro. Ant’s is called Mitre and Dec’s is Deecour, along with the jointly owned Hurley Promotions. As Metro also writes, Ant and Dec reportedly “co-produce Saturday Night Takeaway and own the whole back catalogue of Byker Grove and SM:TV:”.

This article was originally published on November 28, 2019