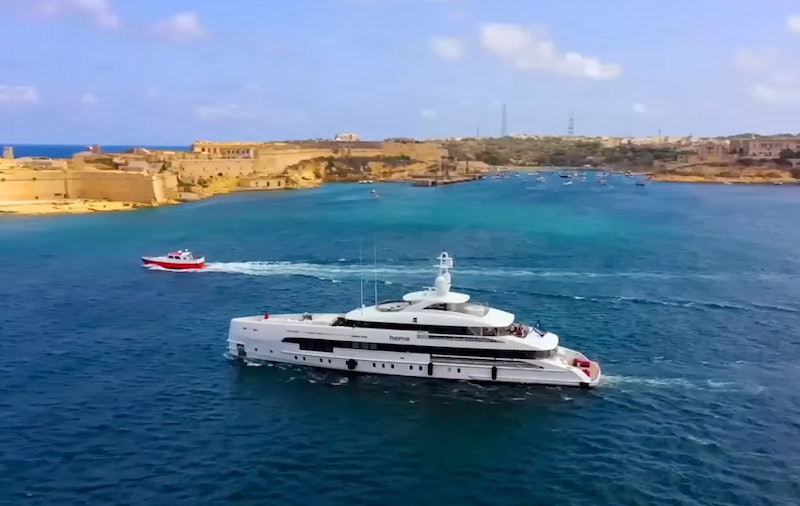 When Captain Sandy Yawn and her all-new crew set sail on Below Deck Mediterranean Season 7, they’ll be in uncharted territory aboard a new superyacht, Home. While cruising the pristine waters of Malta, Captain Sandy was working for the first time on the 163-foot motor yacht, which Bravo described as a “complex hybrid vessel” that the Below Deck Med vet found to be “more unpredictable to navigate.” As the show’s Season 7 trailer previewed, Home won’t make it through the charters entirely unscathed either: In one clip, Captain Sandy laments that she hit something for the first time in her career, while another scene teases a potential “crashing” incident.

Rest assured that there weren’t any serious accidents because Home is currently available for charter in the Caribbean region at a cost ranging from $245,000 to $273,000 per week, depending on the season. Meanwhile, Home — the first diesel-electric motor yacht to appear on Below Deck — is also listed for sale with an asking price of just over $30.8 million. Per the listings, the superyacht, which Dutch shipyard Heesen built in 2017, sleeps up to 12 guests in six cabins and features contemporary, “Ibiza-style” decor. Among Home’s many amenities are a large sun deck, jacuzzi, swim platform, air-conditioned gym, and sky lounge.

Home also sleeps up to 10 crew members. In Below Deck Med Season 7, that includes Captain Sandy, returning Season 6 deckhand Mzi “Zee” Dempers, and newcomers: chief stew Natasha Webb, chef Dave White, bosun Raygan Tyler, stews Natalya Scudder and Kyle Viljoen, and deckhands Storm Smith and Jason Gaskell. Following her involvement in Hannah Ferrier’s mid-Season 5 firing, Malia White cited a scooter accident and pending exams — not fan backlash — as her reasons for not returning for Season 7. (“It’s not that I might never come back to the show,” Malia told Showbiz Cheat Sheet in May. “I’m just not on the next season.”)

Season 7’s “new boat with new department heads” might bring Captain Sandy some challenges during her “first time ever in Malta,” but she’s naturally ready to face them all head-on. The network also told viewers to expect “outrageous costumes, wild nights out, and some major inter-departmental drama,” which “doesn’t even cover what the charter guests are going to bring in the new season.”

As always, expect plenty of romance at sea, too. As Bravo’s first look teased, “boatmances” will be a major topic of conversation this season, including flirtations between Natalya and Storm, as well as several questions about the true nature of Natasha and Dave’s relationship. There could even be a fling between a crew member and a charter guest, too. Though Bravo is premiering the series on July 11, Peacock subscribers can access new Below Deck Med Season 7 episodes a week early beginning July 4.

Fans can also experience Home for themselves off-screen — but it will cost way more than their monthly cable bills.

More like this
Where Was 'The Bachelorette' Season 19 Filmed? More European Destinations Are On The Way
By Radhika Menon
Indian Matchmaking’s Viral Revealed A Major Clue About Her Relationship With Aashay
By Radhika Menon
Mia & Peter Are No Longer Together After 'FBoy Island' Season 2
By Brad Witter and Kadin Burnett
Tamaris Pulled Off The Biggest Twist In 'FBoy Island' History
By Kadin Burnett
Get Even More From Bustle — Sign Up For The Newsletter