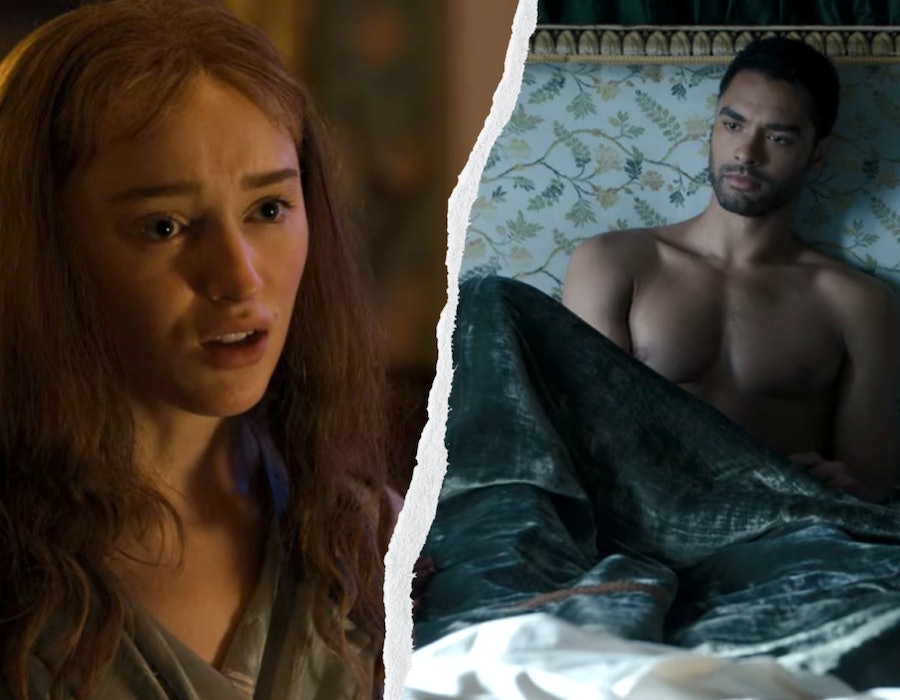 Bridgerton showrunner Chris Van Dusen had a problem: One of the key moments in the show's source material, Julia Quinn’s novel The Duke and I, was a nonconsensual sex scene. Not to mention that it's one that fans of the series have long taken issue with. “It really comes down to the education of Daphne Bridgerton,” he tells Bustle of why he chose to incorporate it into the show, controversial nature aside. “It’s that pivotal moment in her education and in learning what sex is and in learning what being a wife is and what a marriage is.” But while the scene is a turning point for the show's heroine, it's one that continues to outrage fans of the book and series alike. Spoilers for both Julia Quinn’s The Duke and I and its Netflix adaptation Bridgerton ahead.

The Shondaland show, which premiered on Netflix on Dec. 25, centers on the first novel in Quinn’s eight-book Bridgerton series, in which Daphne, the Bridgerton family's eldest daughter, starts a fake courtship with a family friend and Duke named Simon Basset in order to lure in other marriage prospects. As many romantic schemes of this nature go, the two end up fumbling through a series of miscommunications and betrayals before eventually achieving that happy ending.

The series of events in The Duke and I leading up to "The Scene," as it’s called by Quinn's loyal readers, are a bit chaotic. Daphne, who’s always wanted to be a mother, agrees to marry Simon even after he alludes to the fact that he’s not physically able to have children. Soon after their wedding, however, Daphne realizes that it’s not that Simon can’t have children — the equipment down there works just fine — but won’t. In fact, she slowly learns that he’s pulling out every time they have sex and banking on her sexual naïveté to keep her from understanding his contraceptive methods. But once she finally wisens up to the mechanics of sex, Daphne decides to have sex with Simon when he's drunk and his inhibitions are lowered in hopes of retaliating — and also potentially getting pregnant since he’s too inebriated to pull out.

Unsurprisingly, the idea of having sex with a person when they’re intoxicated and can’t fully consent — and then using that act to try and conceive — has never sat right with readers in the two decades since the novel’s publication. The lack of consent is also never fully addressed throughout the rest of the novel, much to the ire of the book series’ fans, who not only questioned its necessity but also if it was realistic that a woman would know that little about sex and procreation, even in the 19th century. But Robert Morrison, a historian and author of The Regency Years: During Which Jane Austen Writes, Napoleon Fights, Byron Makes Love, and Britain Becomes Modern, says that the idea that someone like Daphne is lacking so much basic reproductive and sexual knowledge is understandable for the time.

“There are aristocratic women who have it drilled into them from a very early age that they must remain pure and they must remain chaste if they’re going to attract a man,” Morrison explains to Bustle. It's also not just Daphne who lacks any sexual education; other characters like fan favorite Penelope Featherington are just as ignorant as to how children are conceived. “It would be considered a triumph of parenting if they didn’t know [how sex worked].” And it's because Daphne has no knowledge of how conversations about sex are supposed to work, in part thanks to this societal pressure to stay chaste, that she copes with her feelings of betrayal in the most problematic way possible.

Still, the Netflix series attempts to alleviate some fan concerns with "The Scene." In the show, Simon isn’t drunk during their sexual encounter; instead, Daphne gives herself what she believes is the upper hand by getting on top during sex and making sure Simon is too caught up in the moment to be able to pull out. “It’s where Daphne really finds her power. It’s a give and take in a way, like, ‘You did this, so I did that,’” Phoebe Dyvenor, who plays Daphne in Bridgerton, says about how she read that moment. “It’s that murky thing in relationships of being in a marriage and [figuring out] what [is and isn't] consensual.”

However, fans who both read the series and watched the show are torn on if the latter’s approach is actually any better. Some argue that the show still doesn't even talk about the issues with sexual deception or non-consent, while others say that the main problem is that the TV series doesn't even see its depiction as nonconsensual. Dyvenor, however, welcomed the changes that kept the core feelings of deception and helplessness without crossing that line of intoxicated non-consent. “I was really proud of that scene, and we managed to portray it in a way that felt organic and suited their dynamic in the script,” she explains. “We have intimacy coordinators who are amazing, and every scene was choreographed and well thought out. With every sex scene, there was a story behind it. It was there for a reason.”

But as the number of romance novel adaptations continues to rise in upcoming years, there will be ongoing debates about how many of these now-dated books — in which nonconsensual sex, sexual assault, and rape are not infrequent — will be best adapted for the screen. The good news is that the genre has largely moved away from depicting these types of sex scenes as romantic. The bad news, however, is that it's a lot harder to erase them from the industry's messy past.