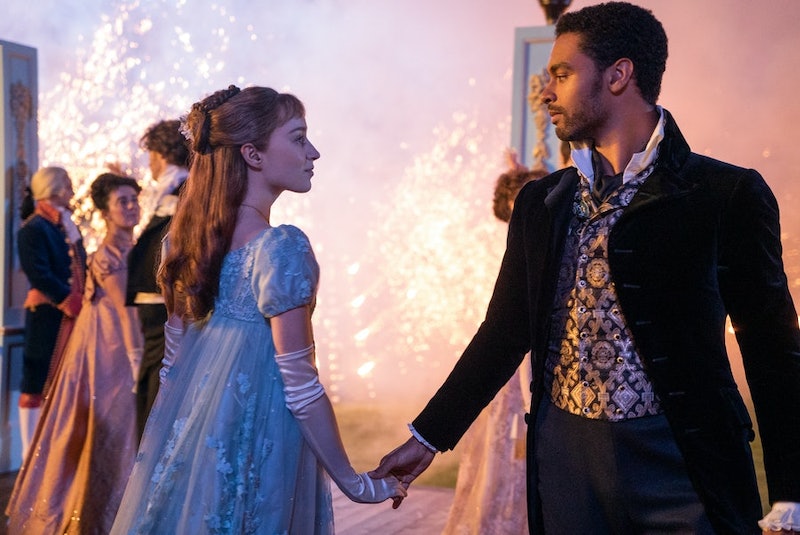 When it comes to sex and scandal, Olivia and Fitz have nothing on the high society set of Regency-era England. On Monday, Nov. 2, Netflix released the first teaser for Shondaland's Bridgerton series, which promises to put an exciting new spin on the standard period drama. "The social season is upon us," the mysterious Lady Whistledown (voiced by the legendary Julie Andrews) says as lavish parties, longing glances, and secret trysts flash across the screen. "Let it be known: If there is a scandal, I will uncover it and I will share every last detail."

Though she claims that none of the characters will ever know her true identity, the arrival of Lady Whistledown and her scandalous "Society Papers" promises to shake everything up for the debutantes, dukes, and well-to-do families by listing subjects by name as she recounts all of their deepest and darkest secrets. Sadly, it looks like no one is safe from her poisoned pen; throughout the trailer, almost every character is seen reading Lady Whistledown's column as she ruins reputations and teases betrothals.

In addition to hinting at all of the dramatic twists awaiting fans, the Bridgerton teaser showcases the series' diverse cast, including Regé-Jean Page as the rebellious and charming Duke of Hastings. Unlike most period pieces, Bridgerton does not ignore that people of color existed in all ranks of society in the early 1800s, which will add an exciting element to the quick-witted, romantic series.

Based on the beloved book series by Julia Quinn, Bridgerton follows Daphne Bridgerton (Phoebe Dynevor), the eldest daughter of the titular family, who is making her debut in London's high society in hopes of finding the perfect gentleman to marry. However, her prospects begin to dwindle thanks to her older brother's exacting standards and Lady Whistledown, who has begun casting "aspersions" against Daphne in her column.

"Enter the highly desirable and rebellious Duke of Hastings (Regé-Jean Page), committed bachelor and the catch of the season for the debutantes’ mamas," the Netflix synopsis continues. "Despite proclaiming that they want nothing the other has to offer, their attraction is undeniable and sparks fly as they find themselves engaged in an increasing battle of wits while navigating society's expectations for their future." All in all, Bridgerton promises to be the sexy, amusing escape from reality we all need right now.

Though the series isn't a completely faithful adaptation of Quinn's novels, Bridgerton has already earned a seal of approval from the author, who told Entertainment Weekly that she was "blown away" by what she had seen. "It's so good," Quinn told the outlet in April. "It's not a word-for-word adaptation, and it shouldn't be. They're interweaving a few new stories and different stories, but the heart of this season is the story of The Duke and I and how they did it and how they structured it, is just brilliant." All eight episodes of Bridgerton will premiere on Netflix on Dec. 25.