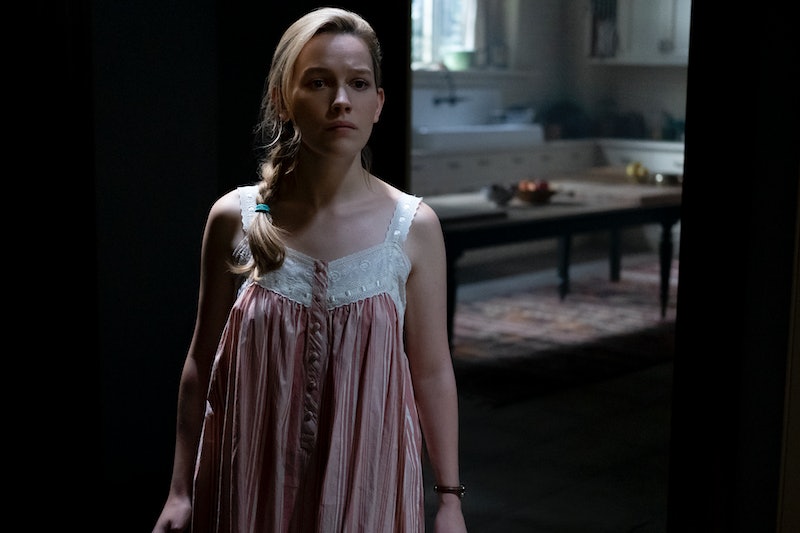 If you watched 2018's The Haunting of Hill House, you're probably going into the anthology series' second season,The Haunting of Bly Manor, expecting some jump scares. Creator Mike Flanagan said ahead of the show that they ramped up the horror for Season 2, this time delving into the "mechanics" and "histories" of the ghosts (in Season 1, we really only ever learned the backstory of the Bent Neck Lady). "That's part of what makes it more fun and scarier. Our ghosts themselves are really, really different," he tells Bustle.

An amalgamation of Henry James' 1898 horror novella The Turn of the Screw and several other of his short stories, Bly Manor follows an American named Dani who gets a job as a governess at a manor in the English countryside. She's being haunted by a ghost of her own (though he's more metaphorical than literal), but there are a number of other terror-inducing entities wandering the grounds of Bly.

Star Victoria Pedretti (Dani) says it's not quite the fright fest that Hill House was. "I'm really surprised they kept being like 'it's scarier [than Season 1]' because it's not," she explains. "I find it almost somewhat fairytale-like." But there are still a number of scenes you may want to steel your nerves for. Read on for every jump scare in the season, so you know when to cover your eyes.

After Dani lands the job as Flora and Miles' au pair at the English countryside estate, she packs up her hostel for the big move. As she's leaving, viewers get their first glimpse of her late fiancé Edmund's ghost in a mirror — one of many sightings to come.

Dani sends Flora off to play with her dolls before attempting to wipe Edmund's image away from a fogged-up mirror, resulting in a jarring screeching noise.

Alone in the dark kitchen, Dani senses a presence before the whistling of a tea kettle abruptly breaks the silence. Moments later, a plague doctor emerges from the shadows, unbeknownst to her.

After Flora and Miles lock Dani in a closet in order to protect her from the Lady in the Lake, she once again sees Edmund's ghost in a mirror.

While washing her hands in the bathroom sink, Dani is again is startled by the image of her dead fiancé.

After Dani discovers Miss Jessel's music box in Bly Manor's off-limits wing, Miles, acting very strangely, quietly sneaks up behind her and creepily wraps his arms around her neck.

While in bed, Dani glances at a pair of mysterious broken glasses on her nightstand before seeing a bloody hand appear next to her.

While sharing an emotional moment with groundskeeper Jamie, Dani turns around to see Edmund standing behind her, eyes glowing as brightly as ever.

As Jamie helps Dani unzip the dress she intended to wear to Owen's mother's funeral, she sees Edmund in a mirror and lets out a loud gasp.

The hand of someone wearing a black glove slides onto Dani's waist as she's rinsing dishes in the sink. Moments later, she sees Edmund staring back at her in a mirror.

In this scene, we finally learn why Edmund's eyes are glowing: it's a reflection of the headlights from the vehicle that hit and killed him immediately after Dani broke off their engagement.

Dani sees Edmund's ghost for the first time in the bathroom of the hospital, moments after learning he didn't survive the hit.

Edmund appears again in the mirror at his wake, though Dani's the only one who can see him.

Dani spots Edmund over Jamie's shoulder while they're sharing their first kiss.

The camera scans Flora's dollhouse before zeroing in on the talisman she modeled after the Lady in the Lake, who's been haunting Bly Manor for centuries.

Tucked away in a memory, Hannah's neck snaps before the frame quickly flashes back to her sitting by a bonfire with Owen.

Hannah follows a set of muddy footsteps out the front door of Bly Manor and is shocked to discover the deceased Miss Jessel facing the foreboding lake.

The Lady in the Lake kills Peter, thus trapping his soul on the property, before dragging his body back to her home at the bottom of the lake.

Flora remembers meeting the manor's faceless child for the first time while tucked away in her own memory.

After Flora lures Dani to the attic, Miles strikes their au pair over the head from behind, rendering her unconscious.

Though Rebecca tries to help Dani escape Bly, she isn't able to make it off the property before the Lady in the Lake drags her away by the throat.

In the episode that explains the Lady in the Lake's backstory, Viola Lloyd's skeleton hands choke and kill her sister Perdita, who'd just opened the trunk of fancy clothes and jewels meant only for her niece.

Viola, now dead, discovers the reflection of her decaying face for the first time.

Realizing that her days are numbered, Dani sees the lady in the lake's faceless image in the dishwater, before shattering a plate on the kitchen floor.