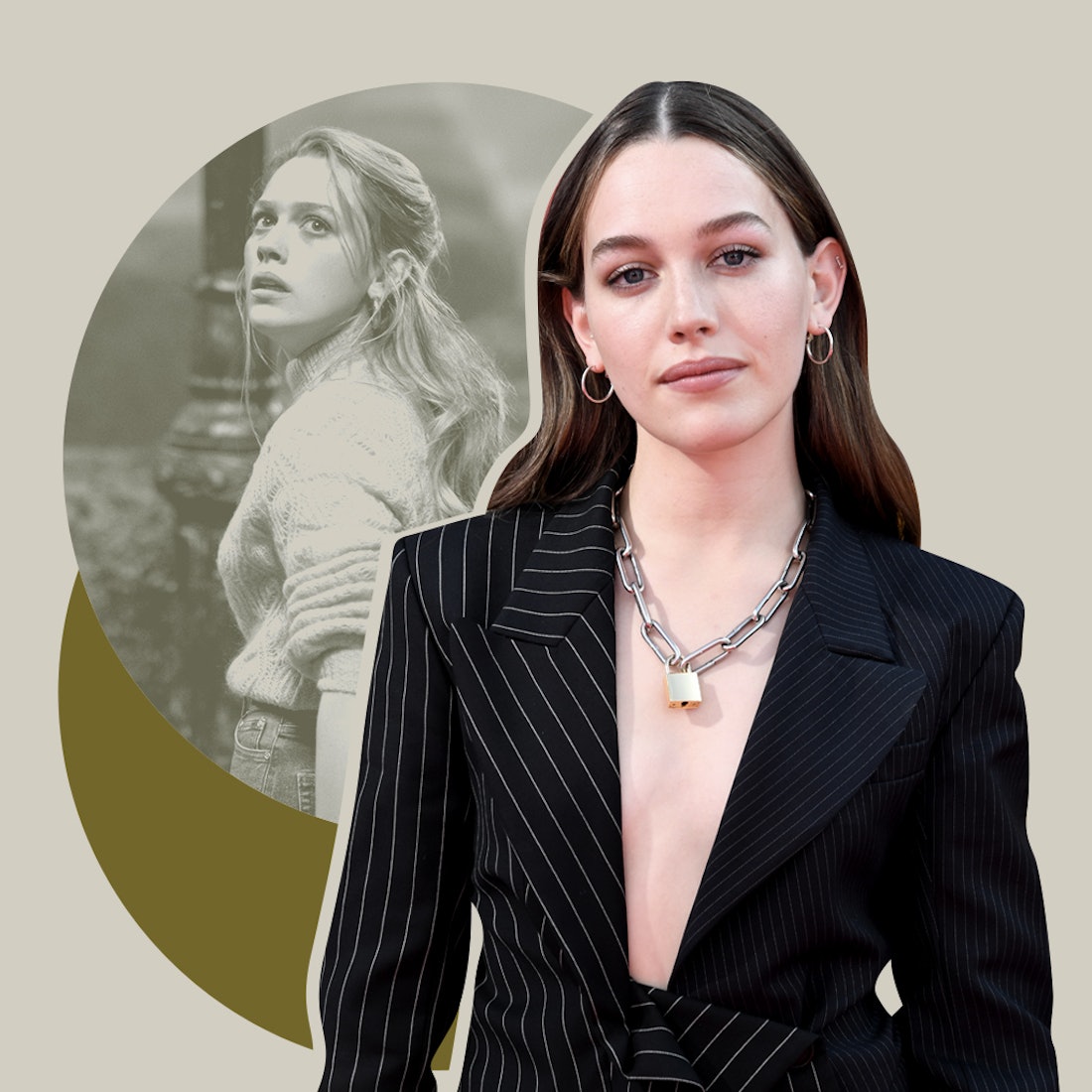 Midway through the second episode of Netflix’s The Haunting of Bly Manor, Victoria Pedretti’s character Dani goes outside to have a panic attack. She calmly excuses herself from the two children she’s nannying and slips out the front door, finally surrendering to herself alone behind a topiary. She is inured to the whims of anxiety, yet determined to control them.

It’s a feeling Pedretti, 25, has grown to know intimately in the two years since the Haunting anthology series thrust her into the public sphere. “As you can see, I'm just trying to calm my nervous system all the time,” she tells me between wheezed laughs on a September Zoom call from Los Angeles, where she recently relocated after her lease ran out in New York City.

Playing Nell Crain in Haunting’s first season The Haunting of Hill House was Pedretti’s first professional acting job, and coping with the pressure cooker of celebrity hasn’t come easy to her. She admits she’s fallen into the trap of reading the comments section, “where people are like, 'Oh, she's so clearly anxious.' And other people are like, 'Oh, she's f*cking stoned.'" Though Pedretti says she's never high in interviews, it makes her uncomfortable to know that people are analyzing her — particularly because they’ve glommed onto some of her innermost vulnerabilities. “They are right that I'm anxious,” she says, eyebrows raised. “But like, I don't need your pity for my anxiety. I'll work on it. I'll get better at it. I promise. And I guess if I'm high, so the f*ck what?"

Weed has become healing for Pedretti — a way to quiet her mind and “just get dumb for a second” after long days inhabiting dark worlds. While filming Hill House, she spent a significant number of hours jumping off of an 8-foot platform with a noose around her neck in order to enact her character’s suicide; in Season 2 of the Netflix thriller YOU, she plays a toxically-in-love rich girl who’s later revealed to be a serial killer. She had a bit part in the 2019 film Once Upon a Time in Hollywood as one of Charles Manson’s acolytes, and in Bly Manor she stars as an American governess who comes to the English countryside to escape a painful past, only to be confronted with more tragedy.

Though Pedretti is a self-described "scaredy cat” who ironically never watched much horror, it’s not Haunting’s ghosts and ghouls that get to her. “I just start making all the parallels to the real world, and there's enough scary sh*t going on that I don't want to invite more images to feed my imagination,” she explains of the show, which is acclaimed for its metaphorical explorations of trauma.

Pedretti can bare her soul onscreen; nourishing it has been harder. “It can be debilitating,” she says of repeatedly immersing herself in such heavy material. “I go back and forth to either like, 'This is just crazy. Who the f*ck decides to be an actor? It's mentally confusing and difficult, so I should probably just stop if I don't want to experience that confusion and pain.' But then I'm like, ‘No, no, no, no, no, no, no. Cate Blanchett seems fine... There is a way to take on all of my dreams and ambitions and feel empowered by that instead of depleted.’”

In quarantine, Pedretti has been learning how to care for herself. She committed to meditating, started exercising more regularly and, like half of Instagram, she signed up for Yale’s “happiness” course. She never finished the class (“I do have ADD, I want to be open and proud about that”) but she did find value in it. “They talk about savoring moments, so they tell you to take pictures. And I was just taking pictures of my breakfast that I made every morning, because that would be one of the most significant things I would do every day,” she explains, snickering at how monotonous it sounds.

"There is a way to take on all of my dreams and ambitions and feel empowered by that instead of depleted.”

Her Bly Manor character, too, begins to embrace herself and her anxiety, eventually becoming “more of an advocate for herself.” If there’s a through line between Pedretti’s roles, she says it’s that they’re all “fierce as f*ck” — strong both because and in spite of their respective traumas. It’s a trait Pedretti shares: she’s open in interviews but also clear about her boundaries, careful not to give too much of herself like other young stars tend to do. When I ask about the most romantic thing she’s ever done — because Bly Manor is billed as a love story — her response is polite but firm. “No,” she says plainly. “It's so personal. I mean, people are always asking me, 'What's the scariest thing you've ever experienced?' And it's just like, ‘I don't want to tell you.’”

She’s seeking more from and for herself; she wants the world to seek less.