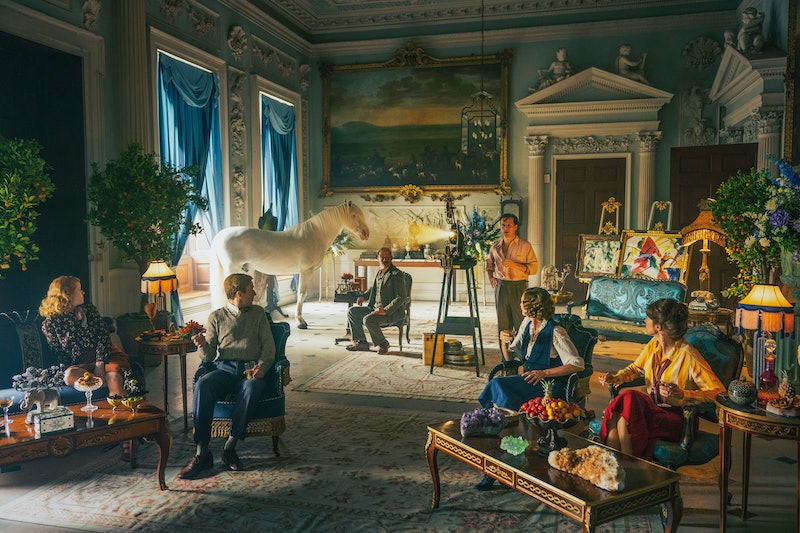 Spoilers ahead for the Pursuit of Love novel and BBC adaptation. When Nancy Mitford’s The Pursuit of Love was first published in 1945, it broke all romantic novel norms. At the centre of her story is vivacious Linda, seen through the eyes of her cousin Fanny. Both women are looking for “the one” but, in Mitford’s world, the course of love never did run smooth – like, at all. Now the famous story is being told on screen how close is the BBC’s Pursuit of Love adaptation to the book?

Set between the two world wars, The Pursuit of Love is narrated by Fanny but focuses primarily on her beautiful cousin Linda. Unlike her cousin, Linda isn’t satisfied with watching life pass her by on the side lines. She wants a husband, a big house, and a lot of fun along the way. However, this isn’t a fairytale and while she’s looking for happiness she endures much heartbreak, including two divorces and separation from her family.

Linda eventually meets and falls for the French duke Fabrice de Sauveterre and readers are thrilled to see that their protagonist has finally found what she’s looking for. However, the book concludes with a shock ending where Linda dies in childbirth and Fabrice is killed while away at war. While there’s no shortage of sassy lines and hilarious antics, you won’t get a happy ending from The Pursuit of Love.

When it comes to the adaptation, the BBC appears to have stuck closely to Mitford’s original text. Broken down into three, one-hour pieces, the series follows Mitford’s storyline almost to a T, fans of the novel will be happy to hear.

Speaking about the show, writer and director Emily Mortimer told Town and Country, “I’ve always loved Nancy Mitford so when I was asked to adapt The Pursuit Of Love it was impossible to say no. It’s an outrageously funny and honest story, whose central character – the wild, love-addicted Linda Radlett – still reads as a radical.” Clearly Mortimer saw no reason to make any drastic changes to a plot that was already juicy enough.

It would appear that the BBC are so enamoured with Mitford’s work that this may not be the last time we see the Radlett family on screen. After The Pursuit of Love, Mitford wrote two more novels with Fanny as the narrator: Love in a Cold Climate and Don’t Tell Alfred. “It’s part of a trilogy of books,” explained executive producer Charles Collier to Deadline, “We hope to bring the books to life in future seasons, so The Pursuit Of Love Season two would be called Love In A Cold Climate based on a brilliant book by Nancy. The third book would become our third season, Don’t Tell Alfred.” Hallelujah!

The Pursuit of Love will air on BBC One on three consecutive Sundays at 9 p.m., starting May 9. All three episodes will also be available to stream on BBC iPlayer.

More like this
Olivia Colman Stars In First-Look Trailer For BBC's 'Great Expectations'
By Sabah Hussain and Sam Ramsden
Everything To Know About The 'Daisy Jones & The Six' TV Series
By Maxine Harrison and Brad Witter
10 Equally Romantic & Heartbreaking Books From British & Irish Authors
By Shahed Ezaydi
Claire Foy Spoke Out About 'The Crown's Gender Pay Gap
By Sam Ramsden
Get The Very Best Of Bustle/UK
Sign up for Bustle UK's twice-weekly newsletter, featuring the latest must-watch TV, moving personal stories, and expert advice on the hottest viral buys.