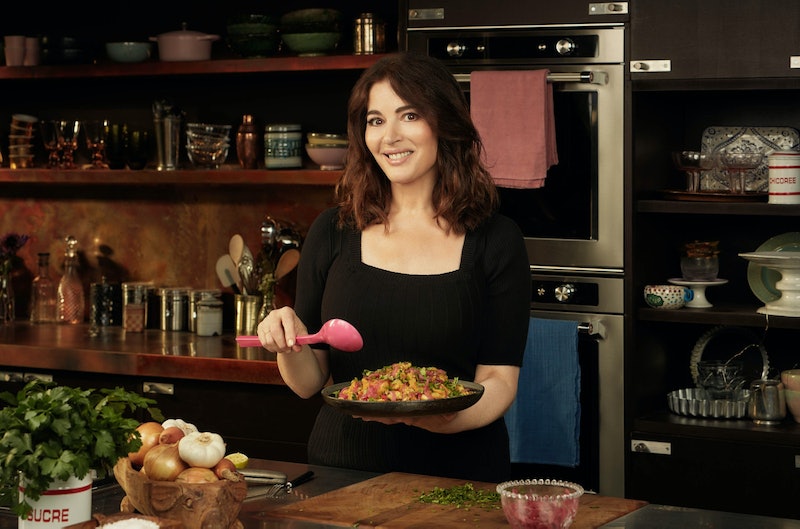 Nigella Lawson has arrived just in time to help ease our lockdown woes. Yes, everyone's favourite culinary queen is back on our screens in the brand new BBC series Cook, Eat, Repeat. Which, as luck would have it, has debuted alongside an accompanying cookbook of the same name. And if you're in desperate need of some quarantine comfort food, here's where to find Nigella Lawson's Cook, Eat, Repeat recipes.

For full details of some of Lawson's latest kitchen creations, the BBC Food website is a great place to start. The site features show-stopping recipes and instructions from Nigella's latest book in their entirety, including the Wide Noodles with Lamb Shank in Aromatic Broth, the Warm Chocolate Tahini Pudding, and the Fish Finger Bhorta — all of which recently appeared on the BBC's Cook, Eat, Repeat alongside the now controversial banana skin and cauliflower curry recipe, which left viewers divided following the show's debut episode, the Independent reports.

"All I do to get the banana skins ready for cooking is cover them in boiling water, add a bit of turmeric, a bit of salt and leave the water to cool," Lawson revealed, discussing her thinking behind the much-debated ingredient. "It’s all about the texture and these always go so velvety and just swell and soften with the flavour of the curry sauce."

Elsewhere, you can also find full Cook, Eat, Repeat recipes on The Happy Foodie website, and the Independent's Sophie Gallagher recently documented her attempt at creating some of the book's standout dishes, offering a glimpse at the ingredients you'll require when trying them for yourself at home. However, the entire selection of Nigella's fresh batch of mouth-watering recipes can be discovered in the culinary extraordinaire's latest release — which is available to purchase now.

The book is described as a "delicious and delightful combination" of recipes and essays. One that manages to break away from the norms of the traditional cookbook.

Split into dedicated chapters, Cook, Eat, Repeat provides over 150 inspiring recipes that cover all seasons and occasions, the highlights of which include the Burnt Onion and Aubergine Dip, Spaghetti with Chard and Anchovies, Beef Cheeks with Port and Chestnuts, Chocolate Peanut Butter Cake, and the Cherry and Almond Crumble.

As mentioned previously, you can watch Nigella put her kitchen skills to good use throughout her brand new BBC series of the same name, which currently airs on Mondays at 8 p.m. on BBC Two.

More like this
Ben & Jerry’s New Sundae Flavours Are A Chocoholic’s Dream
By Sophie McEvoy
Vanessa Bauer Is Reportedly Dating Her 'Dancing On Ice' Partner
By Darshita Goyal
Spencer Matthews’ Impressive Net Worth Expands Far Beyond Chelsea
By Sam Ramsden
Barney Walsh Has Been Linked With This Famous Miss World Winner
By Sophie McEvoy
Get The Very Best Of Bustle/UK
Sign up for Bustle UK's twice-weekly newsletter, featuring the latest must-watch TV, moving personal stories, and expert advice on the hottest viral buys.