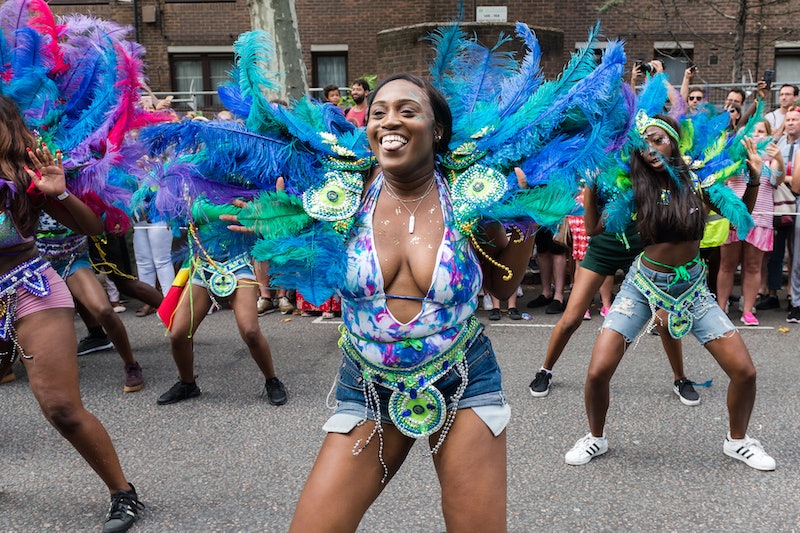 The pandemic has meant 2020 has been a year mostly without festivals, live events, and nights out. Prestigious, summer-defining festivals were cancelled and Notting Hill Carnival is one of them. In May 2020 organisers said the event as people know it would have to be cancelled due to COVID-19 fears. However, you may be able to get involved with Carnival festivities in a way you never have before. It’s estimated that over one million people fill the streets of west London for the celebration and 2020 will been the first time in over 50 years that it won't be celebrated in person. However, you can still get involved while keeping a safe distance. Here’s everything we know about Notting Hill Carnival 2020.

Organisers have announced that Notting Hill Carnival will go ahead over the bank holiday weekend from Aug. 29. However, instead of happening in Westbourne Park and other parts of Kensington it’ll all go ahead virtually. It’ll start with a trailer and live countdown at Piccadilly Circus. Samsung is teaming up with Notting Hill Carnival: Access All Areas to bring the spirit of Carnival to you.

In the week running up to Carnival Samsung is set to release a series of short films which celebrate the food, dance, and music that Carnival is so famous for. You’ll be able to watch them on the Notting Hill Carnival website.

It’s also been reported that Spotify has teamed up with organisers to create a virtual street party. Working with artists including Koffee, The Marleys, and Little Mix’s Leigh-Anne Pinnock, the streaming service has created a microsite that celebrates all things Carnival.

Who Will Be At Notting Hill Carnival?

As Notting Hill Carnival has gone digital you’ll be able to select who and what you see. The Spotify Carnival area will include massive playlists and sets from some of your favourite names in hip-hop, Afrobeat, dancehall, and R&B. It’s been reported that Leigh-Anne Pinnock will showcase her Throwback Thursday playlist. The BBC reported that Radio 1xtra’s DJ Ace and Capital Xtra’s Remel London will present on the main channel. Capital Xtra’s Shayna Marie and Yinka will also present alongside musician Ras Kwame.

While you won’t be able to fully experience the food and dance of Carnival as you normally would Samsung has created the Colours of Carnival film which speaks to organisers and performers about Carnival 2020. Similarly, acclaimed chef Levi Roots is sharing some of his favourite recipes, Soca dancers will show off their amazing costumes, and the award winning Samba drumming troupe Batala will perform.

How To Get Involved?

Preparing to attend Carnival usually involves months of getting a group together and sourcing an outfit. Just because this year's festival isn’t live doesn’t mean it has to be lowkey. You can access all of the Carnival music via Spotify’s Notting Hill Carnival minisite. Similarly, to tune into the films that Samsung has created with Carnival organisers you can access them on Notting Hill Carnival's official website. Not having Carnival in the streets this year is incredibly sad. However, it doesn’t mean you have to miss out.