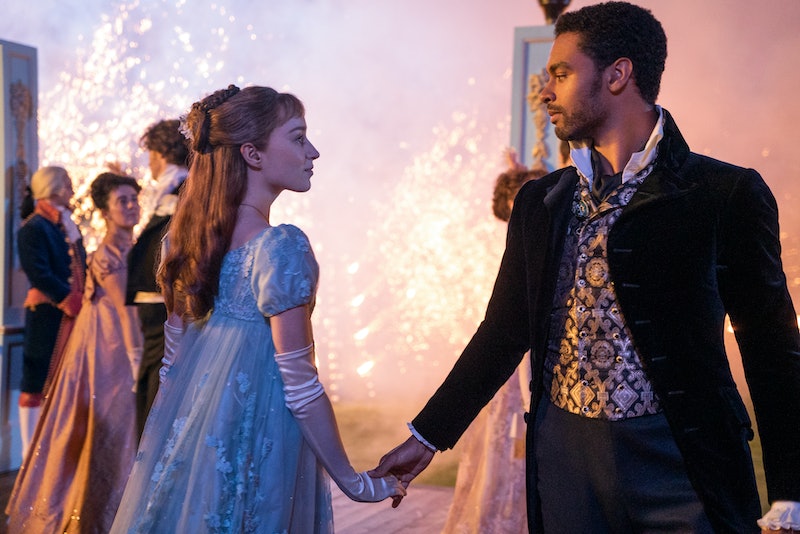 While Netflix's new romance series may take place in Regency England, the Bridgerton soundtrack has a much more modern influence, thanks to the presence of orchestral versions of songs from Ariana Grande, Taylor Swift, and other present-day stars. Luckily for fans, streaming services have made it easy to listen to all of the Bridgerton pop songs made classical once they're finished with the series. With the soundtrack on repeat, it won't be a problem to imagine dancing with Regé-Jean Page.

Along with the score, an EP of those orchestral covers is available to stream on Spotify and Apple Music, featuring interpretations of Ariana Grande's "Thank U, Next," Shawn Mendes’ "In My Blood," and Billie Eilish’s "Bad Guy" by the Vitamin String Quartet, plus Duomo's version of Taylor Swift's "Wildest Dreams." Rounding things out is a cover of "Strange" by Hillary Smith, reinterpreted by the show's composer, Kris Bowers.

Creator Chris Van Husen got the idea to weave in modern pop songs, so music supervisor Alexandra Patsavas — best known for her work on The O.C. and Gossip Girl — specifically looked for classical covers to help them blend seamlessly into the seductions and scandals of 1800s high society. "The familiarity of these pop songs performed by a quartet or orchestral seemed the most seamless way to create a Bridgerton musical signature and also support Kris Bowers' beautiful score," she told Entertainment Tonight. As Bridgerton fans know, it worked wonderfully.

While the idea of using pop songs — even classically reinterpreted ones — to soundtrack a series set in 1813 might seem like an odd choice, Patsavas explained that she wanted the audience to be able to understand the characters' inner feelings with ease. "I did a deep dive into orchestral covers and we had many gorgeous versions to choose from and tried many in editorial," she told ET. "The covers that we finally selected were the best to support the drama and storytelling."

Most remarkably, the entire Bridgerton soundtrack came together in accordance with COVID-19 safety protocols, with musicians recording from their own home studios rather than working with Patsavas and Bowers in person. "I’m so thankful to not only have been a part of this incredible show, but to also make music like this with all of our musicians recording remotely," the latter said in a statement. "I couldn’t have done this without my team and the amazing musicians who put a tremendous amount of heart and emotion into this score, all from their home studios."

The unconventional soundtrack is just one of the ways in which Bridgerton updates both traditional period pieces and traditional romance stories; most notably, the show casts people of color in many key roles, including Golda Rosheuvel as a mixed-race Queen Charlotte and Page as Simon, the handsome Duke of Hastings. "I get to exist as a Black person in the world," he told Entertainment Weekly. "It doesn’t mean I’m a slave. It doesn’t mean we have to focus on trauma. It just means we get to focus on Black joy and humanity."

Fans can only imagine how many more ways the show will mix the romance novels with modern pop culture when Bridgerton returns for Season 2 — and they can listen to the Season 1 soundtrack in the meantime.

More like this
Bridgerton’s Simone Ashley Stars In ODESZA's "Love Letter” Music Video
By Radhika Menon
An Ultimate Guide To The Music Of 'Rap Sh!t'
By Brad Witter
Taylor Swift & Her Mom Clap Back Against The “Shake It Off” Plagiarism Lawsuit
By Jake Viswanath
Taylor Swift Calls Dwayne Johnson "The Man" After Revealing New "Taylor's Version" Song
By Jake Viswanath
Get Even More From Bustle — Sign Up For The Newsletter