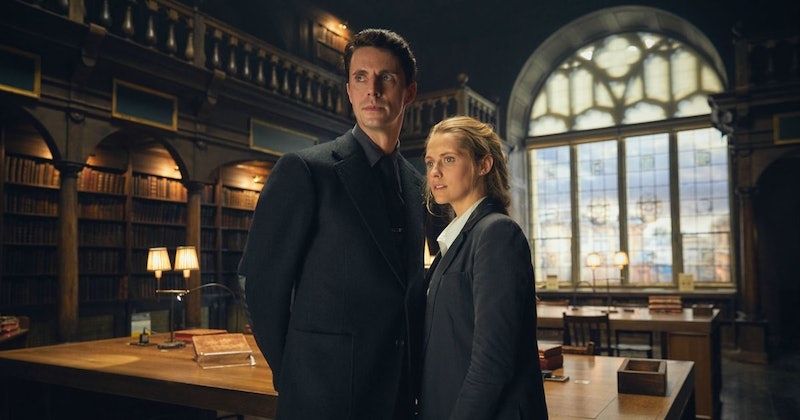 Debuting in 2018 to major viewing figures, the second series of A Discovery of Witches is finally nearing its release. Based on Deborah Harkness’s All Souls fantasy trilogy, the series follows Diana Bishop (played by Teresa Palmer), a history of science professor who also happens to be a witch, as she discovers her ancestral roots as well as a forbidden love for vampire Matthew Clairmont (Matthew Goode). So here’s how to watch Discovery of Witches series 2 in the UK, because you’ll want to see where this supernatural story is heading.

According to Digital Spy, Sky originally planned to air the second series in 2020 but was inevitably delayed due to the ongoing pandemic. Instead, Discovery of Witches series 2 will air on Jan. 8, 2021, on Sky and will be available to stream on NOW TV. The third series is currently in production, and is expected to air sometime in 2022 following a short hiatus in September due to a positive COVID test, per Deadline. “A Discovery of Witches S3 production was temporarily suspended with affected crew self-isolating,” Sky said in a statement. “However, since October 8 we have now resumed production, after following the various guidelines and safety protocols.”

So, what can fans expect from the second series? That cliffhanger to be resolved, for starters. And since it’s based on the second book of Harkness’s trilogy, Shadow of Night, expect a lot of time travel as it’s a major strand of the narrative. Fans will also be treated to a host of new characters, including the witch Goody Alsop (Shelia Hancock), vampire Philippe (James Purefoy), and Matthew’s nephew Gallowglass (Steven Cree). Victoria’s main man Tom Hughes will also star in the second series as Elizabethan playwright Christopher Marlowe, per Radio Times.

“We were absolutely thrilled that A Discovery of Witches was such a hit with viewers,” executive producer Jane Tranter told Digital Spy. “There was a real sense of community throughout the run as fans old and new joined together to watch each week. We cannot wait to continue the journey with them and, as the show continues to sell around the world, bring a global fanbase to these engaging and fascinating characters.”