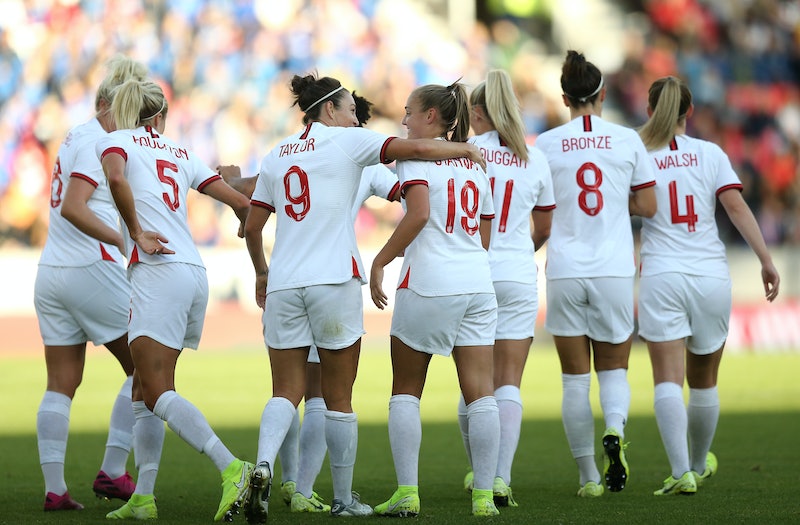 Women’s football has been steadily gaining attention in the UK thanks largely to the success of England’s national women’s team. There were record-breaking TV audiences as fans followed the team’s progress in the 2019 FIFA Women’s World Cup, in which they came fourth. And shortly after the tournament ended, a Barclays and YouGov poll showed that a third of British adults were fans of women’s football, with 69% agreeing it should be given the same profile as the men’s game.

Now England, Scotland, Wales and Northern Ireland women’s teams are getting ready to try their luck for the Women’s Football World Cup. So here’s everything you need to know ahead of the tournament’s qualifying stage, because we all know it’s coming home... eventually.

When Is The Women’s Football World Cup?

The 2023 FIFA Women’s World Cup is scheduled to take place between July 20 to August 20. This is the first time two countries, Australia and New Zealand, will be co-hosting the tournament. They beat Brazil, Colombia and Japan during the host selection stage, winning the bid to host last summer.

To determine the 32 teams that will compete in the 2023 Women’s World Cup, each team must play in fixtures during the qualification process. As co-hosts, Australia and New Zealand automatically qualify for the tournament, leaving 207 remaining FIFA members to qualify for the tournament. Each country can choose to qualify through its own confederation’s qualifying process. These confederations include:

How Can You Watch The Qualifiers?

Qualifying matches started this week and will continue all the way through to 2022. You can watch the England Women’s team’s fixtures on ITV. In a new deal with England Women, ITV will now broadcast The Lionesses’ matches as they try to reach the World Cup and European Championships, as well as friendly games until the 2024/25 season. Games are also free to watch on ITV4 and ITV Hub. As for England, Scotland, Wales and Northern Ireland, you can catch their matches on BBC iPlayer or BBC Sport.

England will next play today Friday, September 17 at 7 p.m. competing against North Macedonia. The team’s next games are on:

The team will also play more matches in April 2022. You can keep track of all England Women’s matches and scores on the official website.

Scotland will be play further matches in spring next year, keep up with their progress via their official website.

Wales has more qualifying games set for April 22, stay up to date via the Football Association of Wales’ official site.

Like the other world cup hopeful nations, N. Ireland has more qualifying matches coming early next year. Make sure you don’t miss a game via the Irish Football Association website.

Which Teams Are The Ones To Watch?

With two World Cup wins under their belt in 2019 and 2015, the USA team are definitely a team to look out for. Midfielder Megan Rapinoe came out as the star player and was named player of the match after the 2019 final. She was also awarded the Golden Boot as the top scorer in a tournament.

The Wales team are also entering the qualifying process with a renewed sense of hope that they’ll qualify for their first major tournament. Speaking to Wales Online captain, Sophie Ingle said: “The team fully believe [we can qualify]. We've been working so hard on and off the pitch to put things right that didn't go right last time.”

More like this
All The Ways You Can Watch The Super Bowl In The UK
By Asyia Iftikhar and Darshita Goyal
David Beckham’s Controversial Qatar Deal Skyrocketed His Net Worth
By Catharina Cheung
Twitter Is Saying The Same Thing About Beyoncé's Renaissance World Tour
By Shahed Ezaydi
The Banned 'Friends' Ad Shows Monica As You’ve Never Seen Her Before
By Sam Ramsden
Get The Very Best Of Bustle/UK
Sign up for Bustle UK's twice-weekly newsletter, featuring the latest must-watch TV, moving personal stories, and expert advice on the hottest viral buys.