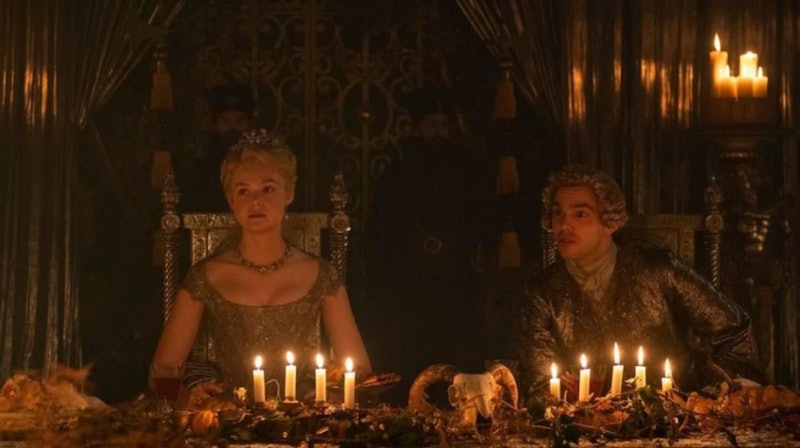 When The Great Season 1 ended in summer 2020, viewers were left with serious questions. Will Catherine, Peter, and their baby survive? Is Peter the father and will Catherine ever get true power? While history can answer some of those questions, viewers won’t have long to wait to see the consequences played out onscreen. Here’s how to watch season two of The Great in the UK. The comical dramatisation of Catherine the Great’s rise to power has only just got started.

TV Line reported that when the 18th-century historical drama was first announced it was said to be a limited series lasting for 10 episodes. However, when Harper’s Baazar asked the lead actor, Elle Fanning if she’d want to continue acting out Catherine’s life she said, “Oh yeah, I'd be down. Easy yes." And as the trailer for Series 2 has been released it’d seem that her wishes are coming true.

As for where UK viewers will be able to watch it, while Season 1 aired on Channel 4, Vogue writes that The Great Season 2 will be available to watch on Starzplay in the UK as of Sunday, Dec. 5, following its U.S. debut on Hulu on Nov. 19.

Fanning revealed that filming finished in July 2021 and posted a picture with her co-star and on-screen husband, Nicholas Hoult. “Wow. What a tremendous feat filming in a global pandemic. I am eternally grateful for the crew that kept us all safe and going,” she wrote, “This season is going to be WILLLLDDDD! I love them with all my heart. Cannot wait for you to see what we have cooked up!” Huzzah!

The trailer for season two opens as Peter (played by Hoult) asks Catherine how she is. She responds, “At war with you, that’s how I’ve been.” Season one only represented the very beginning of Catherine the Great’s ambitions to rule Russia and viewers can expect a lot more plotting, dramatic exits, and fabulous wigs.

*Spoilers for Season 2 ahead*

A synopsis published on Entertainment Tonight revealed that Season 2 begins as Catherine finally takes her place on the throne. However, her next ambition is to bring enlightenment to Russia. This makes her unpopular, even within her own family. Not that that’s ever stopped her before. She’s also tackling her complicated feelings for Peter and awaiting the arrival of their baby.

Eagle-eyed fans will recognise that there will be some cast switch-up in season two of The Great. Gillian Anderson has entered the show as Catherine’s slightly chaotic, glamorous mother Joanna. If Catherine thought she’d found opposition in her former husband then her mother is about to give her a whole new world of problems.

According to Deadline, “[Joanna] has heard rumours of her daughter’s coup and come to Russia to see it for herself. Though the apple of Catherine’s eye and a doting mother, it soon becomes clear Joanna has more sinister intentions to save her family’s reputation.”

As season two dramatises the next steps in Catherine’s reign of power, it may not be the last time that Fanning gets to slide into the shoes of one of the most famous women in history. Speaking at The Critics Association winter tour, executive producer Marian Macgowan said that the creators originally pitched “six seasons" and, "So we believe there's sufficient material to take us through until she is an old woman."

This article was originally published on Aug. 14, 2021