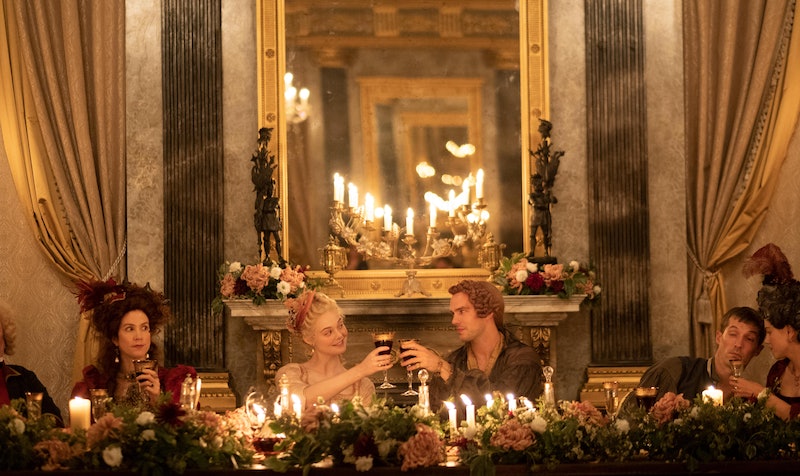 Update: Hulu announced on July 2 that The Great has been renewed for Season 2. A premiere date has not yet been revealed.

Earlier: Hulu's new series The Great follows Peter III (Nicholas Hoult), the Russian emperor whose reign was short lived when he was swiftly usurped by his wife, Catherine II (Elle Fanning). And while The Great Season 2 hasn't been announced, the show could certainly continue, thanks to its rich source material.

The show should not, to be clear, be confused with HBO's 2019 series Catherine the Great, which stars Hellen Mirren and follows the same historical figure later in her life. Hulu's adaptation follows the young Sophie of Anhalt-Zerbst of Prussia, who married her second cousin in August 1745 and took the name Catherine II. Season 1 follows their ill-fated union — which involved a steady stream of lovers on both sides — and hints at Peter III's eventual fall from grace.

And what a fall it was. In July 1762, Catherine staged a coup and claimed the Russian throne for her own. Peter died — his cause of death is unknown, though it's widely accepted to have been an assassination after he was forced to abdicate — just eight days later. So, depending on where Season 1 leaves off, there is still rich story to mine — not to mention the fact that Catherine the Great reigned for 34 years after taking the throne.

The Great is hardly a stuffy period piece, however. It's also hilarious, filled with plenty of ahistorical details for entertaining flair. The characters also curse, which creator Tony McNamara told the New York Times was "a way to break the genre a little bit and let you into the characters a little more." He continued, saying, "There's something very polite about period stuff, I find often, that keeps you outside the characters."

As the same article points out, irreverent historical rewrites have become popular — most notably with Yorgos Lanthimos's 2018 film The Favourite (which was co-written by McNamara) and the Apple TV+ series, Dickinson. In The Great, Peter III is depicted as a bumbling idiot (which, according to historical accounts, is not far from the truth), while his wife quietly realizes, in a tale that is retroactively feminist, that she would make a much better Russian ruler.

"We're always asking ourselves, 'What is the contemporary question?'" McNamara told the NYT. "Not just, 'I'm trying to take an empire,' but, 'What would it be, for a 20-year-old to end up in a really bad marriage that she couldn't leave?'"

And since The Great is already receiving favorable reviews, Hulu will likely greenlight a Season 2. But since the series has a high production value (not to mention that most productions have stopped filming due to coronavirus restrictions), fans may be in for a bit of a wait. Until then, however, they can rewatch Nicholas Hoult's character throw a parachuted Pomeranian over his palace balcony, proclaiming it to be "science." Huzzah!

More like this
Wait, Is Barney Stinson Related To Sophie On 'HIMYF'?
By Gretchen Smail
Everything To Know About 'Only Murders In The Building' Season 3
By Gretchen Smail and Kadin Burnett
Everything To Know About Hulu's 'How I Met Your Father' Season 2
By Shannon Barbour
A Teen Murder Victim's Horrific Diary Entry Helped Police Find Her Killer
By Brad Witter
Get Even More From Bustle — Sign Up For The Newsletter

This article was originally published on May 15, 2020